Deep in the bowels of the archives here at OHSU (ok, on a shelf no one looks at in an odd but unassuming box), seven canisters of film have been languishing since the 1930s. A rare and exciting find, made the more notable by the nature of the production itself: Created by A.J. McLean, M.D., Portland's controversial first neurosurgeon, it is a documentary on the "Adequate Neurosurgical Examination," made right here at the University of Oregon Medical School.

Or so we think. It's 16mm film, and we don't have a projector. So, we unrolled the beginning frames in each can and squinted over them with a magnifying glass and lightbox. It's a pretty low-power magnifying glass, and we're all getting older, and the text frames seem to be hand-lettered, so you'll have to forgive us any possible inaccuracies on the title. It's definitely by A.J. McLean, with the assistance of Dewitt Clinton Burkes and another person (Kane, perhaps?), and it certainly features live exam techniques with an assortment of patients. More details on the contents of the film await the acquisition of a 16mm projector (anyone got one they want to donate?) or the funds to reformat all seven cans.

Readers of the blog and devotees of our quarterly exhibits will remember McLean from a very popular display we mounted in conjunction with a History of Medicine Society Lecture by Michael Bliss on Harvey Cushing, one of McLean's teachers. D.C. Burkes, M.D., FACP, was a 1911 graduate of the University of Louisville who came to Portland in 1928 as one of only three practicing psychiatrists in town. He was the first in Oregon to become doubly certified in psychiatry and neurology, and was a clinical professor of psychiatry at UOMS for many years. He was also past president of the Oregon Board of Health and the North Pacific Society of Neurology and Psychiatry, and member of the National Committee on Mental Hygiene, the American Psychiatric Association, and (according to his obit) something called Electric Shock Research. He founded the psychiatric wing at Holladay Park Hospital and was a founding member and first president of the Portland Chamber Orchestra. So, in a nutshell, he had a lot more people skills than McLean did.

We're very excited by this new find, and hope to have more information about the film and its lessons in due time. Until then, the canisters have been repatriated to the A.J. McLean Papers, whence they inevitably came.
Posted by Sara Piasecki at 10:41 AM No comments: Links to this post

And rinse, and spit

Here's one of the earlier photographs we received in the donation from the School of Dentistry Alumni Association this week; is it just me, or does that patient look a little worried? 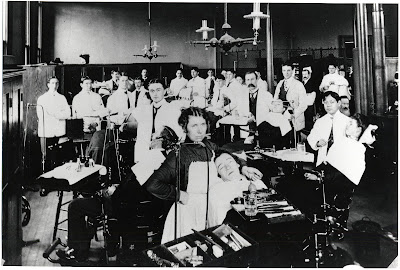 This was probably taken at North Pacific Dental College at its location in downtown Portland, fifty years or so before the name changed to University of Oregon Dental School.
Posted by Sara Piasecki at 12:17 PM No comments: Links to this post 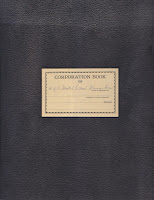 Since the week began, we have been showered with no less than six separate donations, from three of the OHSU schools and a private practitioner. This doesn't happen often, so we're taking a minute to bask in the glow before diving back into initial processing (so we can get some of these boxes off the floor!).

On Monday, we did indeed tour the Meyer Lab, and we carried back a (heavy) box of books, lab manuals, reprints, and a few photos (teaser: tune in on Feb. 13 for a Valentine's special featuring one of those photos).

Yesterday, we found a packet of biographical information on past School of Medicine deans in our mailbox; those materials have already made their way into the Biographical Files. (One down!) We were also visited by Jill Smith from the SOM Alumni Association, who brought us two photos and a fantastic DVD containing interviews with alum Dr. E.B. Bossatti and his wife Edith.

Dr. Charles Grossman also stopped by yesterday morning, bringing with him 21 of his research notebooks, representing his lab investigations from 1957 through the 1970s. Those notebooks will join the rest of the material that Dr. Grossman has been bringing in over the past several months.

In the afternoon of that same day, I took the winding tunnel path down to the School of Dentistry, where seven boxes of materials were waiting. A truly miscellaneous assortment of things, miscellaneously packed (and that's being generous), the haul includes hundreds of photographic prints and negatives, school publications, realia (like plaques and paperweights), videos (promotional, news, and events-related) and some documents--including the SOD Alumni Association's original corporation book from 1966 (shown here). This represents our first significant donation from SOD, and we're glad to get them on board!

Finally, today, we received a box of publications from the School of Nursing, along with what I can only describe as a spiral bound picture book, the pages of which are printed on photo paper but show primarily textual information. Very 1960s!

While we're probably most excited about the dental donation (class pictures! prominent Portland dentists! an ashtray!), we are thrilled with such abundance. If you're looking for us between now and, say, March, check under the pile by the table....
Posted by Sara Piasecki at 1:43 PM No comments: Links to this post

Judge Keith Raines, J.D., donor of the J. Richard Raines Papers (Accession 2008-008), has funded the construction of a custom shadow box for the first roentgen ray tube used in Oregon, just one of the items in the Raines collection. The work was done by Pearl Framing here in Portland. While the photograph below doesn't quite do it justice, you can get a sense of the style of the design. The case has taken up residence in the History of Medicine Room, so stop by the next time you're passing! 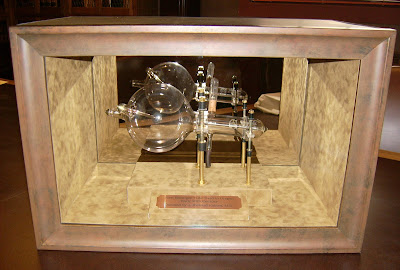 Posted by Sara Piasecki at 11:24 AM No comments: Links to this post

On Friday, we were visited by Ernest Alan Meyer, ScD, and his wife Barbara, who are finally retiring from OHSU after 50 years in the microbiology department here. They brought us a handful of items, including a 1970s-era programmable calculator, a few miscellaneous university publications, and more materials created or collected by Harry J. Sears, Ph.D. (including the grade book and term schedule below). We've now received Sears materials from at least four different sources, including three relatives (Meyer is Sears' nephew).

And there may be more on the way: the Meyers have invited me to come over to their lab later today, to see what they have in the way of curricular materials, books, and equipment--including, apparently, Wilbert Todd's centrifuge. Stay tuned! 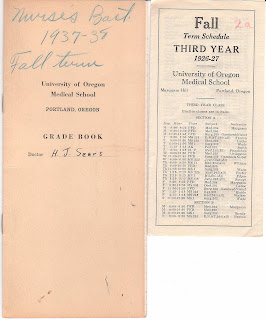 Posted by Sara Piasecki at 10:06 AM No comments: Links to this post