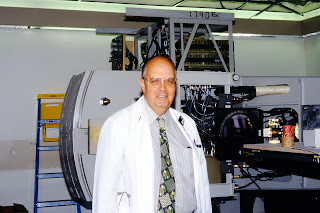 The streaming video of last Friday's OHSU History of Medicine Society Lecture is now available, for those who were unable to attend in person (RealPlayer required). Dr. Kenneth R. Stevens, Jr., M.D., presented a very personal talk on the history of radiation oncology in Oregon, highlighting the "pioneers and pioneering" during the period 1953-2008. Dr. Stevens was also instrumental in the development of our current exhibit, Rontgen Rays, Harnessed to Heal, which is on display in the main lobby of the OHSU Library.

While streaming video links usually appear on our lectures page, and while online components of our physical exhibits usually appear on our exhibits page, a moratorium on changes to the OHSU Library web site is currently in effect. Hopefully, we'll be able to link to these resources as we normally would by the end of March at the latest.
Posted by Sara Piasecki at 7:08 AM No comments: Links to this post 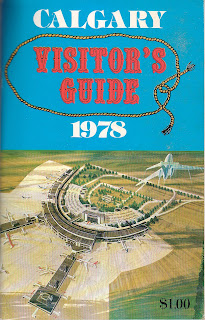 Oliver N. Massengale, M.D., delivered to us today nine storage cartons of records of the North Pacific Pediatric Society, which (as I mentioned in an earlier post) began in 1919 as one of the earliest pediatric societies in America, and one of the first international medical societies in North America.

The collection contains planning information, programs and minutes from all the semi-annual meetings, 1919 to the present; directories of members and completed membership forms; and constitution and by-law information. One box, labeled "Potential Meeting Sites", has flyers, brochures, and event hosting information for places around the Pacific Northwest (like the Calgary guide shown here).

This collection provides an outstanding record of pediatrics research and practice, and compliments our other records of organized medicine in Oregon. Our great thanks to Dr. Massengale for shepherding this material into HC&A.
Posted by Sara Piasecki at 11:53 AM No comments: Links to this post

Transcript: Grossman on medicine and politics

We've just received back from the transcriptionist the complete oral history interview with Dr. Charles M. Grossman, M.D. Readers of the earlier posts on Dr. Grossman will recall that he's very interested in politics, and was once called a "professional rabble-rouser" by another Portland rabble-rouser, Tom McCall. (Grossman only objected to the "professional" part, since he wasn't getting paid a dime for it.)

The following excerpt nicely illustrates Grossman's style and that of his interviewer, Dr. Ralph Crawshaw, M.D.:

CRAWSHAW: Of course we do. Now you've got me on your side and I'm cheering you on. And that isn't the point. What happened when HUAC came to town?

GROSSMAN: I was being fired from a nonpaying job.

CRAWSHAW: –ostracized socially, politically and professionally. Yeah. So it had a lasting effect on you. It excluded you from, theoretically, the proper resources.

GROSSMAN: I never became a golf playing doctor, that's all.

The full transcript will shortly be available upon request.
Posted by Sara Piasecki at 2:44 PM No comments: Links to this post

The correspondence from the Portland Academy of Medicine Records (Accession 2004-019) has been such much fun to read that we'll go with one more blog post based on it (I promise, something new and different tomorrow).

A letter from Dr. M.M. Woodwroth in Albany, Oregon, to Warren C. Hunter, then secretary of the Academy, dated October 10, 1941, reads:

Dear Warren,
Thank you for your letter relative to the Academy of Medicine which reached me thisafternoon. I recall now that you had asked me [a]bout membership in the Academy during the State Meeting but had given it no further concideration.
To be brief, Warren, if you think that you draw enough water with the membership there to slip me by the board of trustees, go ahead and shoot. I really would be most happy to belong as a member by remote control if it is agreeable. Let me know if, as and when any dues are payable in case I'm elected to membership.
If you are still as efficient a typist as you were in school you will notice many errors in this typeing; the chief trouble lies in the fact that in one hour from now we leave for a ten days deer hunt in central Oregon and I havnt a darn thing packed, so as I gaze at the keys before I peck them, I'm thinking of sleeping bags, shells, tents and a million other things that I have to assemble before starting.
Thanks again for remembering me in this matter Warren and I'll see you later.
Very truly yours, Marshall

Checking our Biographical Files for any additional information on Marshall Woodworth, I found his obituary, which seems doubly tragic in light of the earlier letter:

[Oregonian, Feb. 22, 1957]
Medic Slain by Shotgun: Mishap Takes Dr. Woodworth
Albany (AP) -- A shotgun blast today ended the life of Dr. Marshall M. Woodworth, 62, who had been practicing medicine in Albany longer than any other physician. It was an accidental shot that killed him, reported Walter Kropp, coroner's deputy. Kropp said investigation showed Woodworth was cleaning his guns at the time. ...

Posted by Sara Piasecki at 12:14 PM No comments: Links to this post

Among the collections here in the archives is one containing records of the Portland Academy of Medicine (Accession 2004-019), a medical society formed in 1906 by a handful of local physicians, primarily those of the "old guard" associated with the University of Oregon Medical School. The history of the group's formation and early years is full of intrigue (as one might expect of Portland medical politics), and the documents contained in the collection vividly illustrate the personalities of the day.

The Academy had rules, and the officers were pretty serious about enforcing them. Two letters from the 1930s show just how serious:

Dear Dr. Bettman: Last year when I asked for an extension of time on my Academy dues I expected the Depression to be over by now. Balancing my budget demands that I now resign from the Academy. "If and When" I am able to pay my present delinquency I shall consider re-instatement.

Sadly for Dr. Moore, he didn't quite understand the by-laws on dues payment. Penciled on the bottom of the page is the notation: "Not accepted by council because in arrears with dues. H.J.S." Once you accepted admission into the Academy, you were not allowed to resign until your dues were fully paid.

I would suggest that those who have lost their membership be written to that effect and asked to return their membership certificates, and in event that this is not done that a messenger be sent for them.

Perhaps physicians were flaunting their Academy membership certificates on office walls, or flashing their cards at the Union Club. In either case, the Academy wasn't going to stand for it.
Posted by Sara Piasecki at 1:00 PM No comments: Links to this post