Something old, something new

Several new titles have come through cataloging in the past week, from the latest history of medicine addition to the oldest of a recently acquired collection to the local materials that dribble in from time to time.

In the modern history of medicine category, we have:
The making of Mr. Gray's anatomy by Ruth Richardson
(Oxford University Press, 2008)
From the book blurb: "In this, the 150th anniversary of the original publication of Gray's Anatomy, Richardson, a scholar of the history of science, relates how this classic came into being. Richardson does a creditable job of explaining how two young doctors, Henry Gray and Henry Vandyke Carter, teamed together to create an anatomy manual better than any available for students in surgery. Their version had better and larger drawings (in fact, their size, which contributed to the book's success, was an accident: the illustrations were meant to be 25% smaller), simpler text and a very successful integration of surgical techniques with anatomical features."
Available for checkout in the OHSU Main Library. 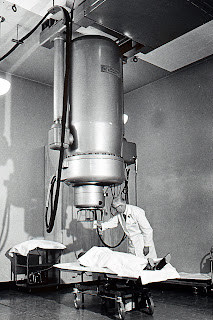 A reminder to readers in the Portland metro area: the third presentation in the OHSU History of Medicine Society Lecture Series will be held tomorrow, Jan. 23. Details are below. The lecture is free and open to the public, so please join us!

Dr. Kenneth Stevens received his medical degree at the University of Utah before coming to Portland for his residency in radiation oncology at the University of Oregon Medical School. He joined the medical staff at OHSU in 1972 and became chairman of the Dept. of Radiation Medicine in 1989. Stevens retired as Chair Emeritus in 2005. Currently, Dr. Stevens is an active member of the department, where he specializes in treating pediatric, ocular, skin, and rare malignancies.
Posted by Sara Piasecki at 8:16 AM No comments:

Programming note for 1/22: Change in hours

This week's open hour period on Thursday afternoon will run from 1:00 pm through 3 pm. The History of Medicine Room will be closed from noon-1:00 pm so that staff can attend the OHSU Town Hall on the economic downturn. We apologize for any inconvenience. Appointments to visit the collections outside the posted open hours can be made by contacting homref @ ohsu.edu.
Posted by Sara Piasecki at 7:59 AM No comments: 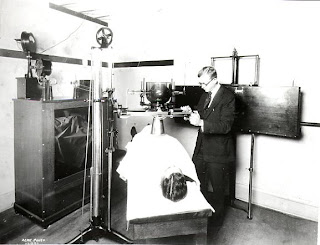 We're happy to announce the opening of our latest exhibit (or exhibition, if you insist): Rőntgen Rays, Harnessed to Heal: Early Radiography and Radiation Medicine in Portland, now on display in the main lobby of the OHSU Library.

Portland radiologist Ivan M. Woolley, M.D., author of Roentgenology in Oregon: the First Fifty Years, chose 1903 as the starting date for his history of radiology. At that time, it was not widely known that overexposure to x-ray could cause injury. Many pioneering physicians who worked in radiography often developed badly burned arms and hands. Even in later years, when the danger was known, technicians were often severely injured through carelessness and overexposure, and misdiagnosis due to inadequately powered equipment was a frequent occurrence.

The Department of Radiology was established at the University of Oregon Medical School after the school moved to Marquam Hill in 1919. When the Multnomah County Hospital also moved to the Hill in 1921, a Wantz Jr. X-Ray machine was installed for diagnostic work. When the Doernbecher Hospital was completed, an x-ray department was opened and a combination fluoroscope and radiation Victor machine was employed. Upon construction of the Outpatient wing, the machines from the hospital were moved to the new location but the Doernbecher machines were left to be used solely for pediatric patients.

The UOMS Radiation Oncology program was established in the Multnomah County Hospital in the 1930s as the division of X-ray Therapy within the De¬partment of Radiology. The first resident in general radiology was accepted in 1934; the first resident receiving training in radiation therapy started his three-year residency in 1964.

The new exhibit highlights the advances in radiology and radiation medicine at OHSU from the turn of the century to the present, and includes materials from Historical Collections & Archives as well as the Dept. of Radiation Medicine and the personal collection of Dr. Kenneth R. Stevens, Jr., M.D. Materials will be on display through March 2009. Unfortunately, due to a temporary moratorium on changes to the OHSU Library web site, the online component of this exhibit will not be available concurrently.

Questions about the exhibit and requests for exhibit brochures can be addressed to homref @ ohsu.edu.
Posted by Sara Piasecki at 2:01 PM No comments: