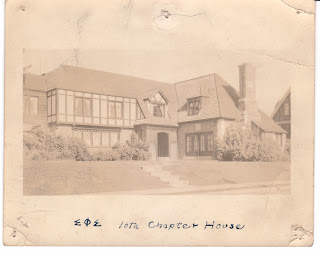 Ok, so what the photograph depicts is not a mystery: it's clearly labeled "Sigma Phi Sigma Iota Chapter House." The mystery is: when; where; and why was it tucked into the 1911 text The administration of nitrous oxide and oxygen for dental operations by Frederick Hewitt in the History of Dentistry Collection? The book, of course, lacks any other provenance--no signatures, no bookplates, no stamps.

Poking around on the web, we see that a modern organization called Sigma Phi Sigma is the "National Morticians Fraternity." Perhaps the owner of this photo wasn't a very skilled dentist, or was moonlighting after clinic hours? A more tantalizing possibility is raised by the history of the Oregon State University chapter of Phi Kappa Psi fraternity, which notes that

Was our dentist (and let's assume he was a dentist, given the book's subject) an early member of this OSU fraternity? Until we get more information, this little snapshot will be placed into the Historical Image Collection under Places > Fraternity Houses.
Posted by Sara Piasecki at 11:57 AM