Ah, swine flu. Some pundits are waxing nostalgic for mandatory quarantines and confinement of the sick. Sounds terrible to anyone who's been in a modern hospital room, all white and sterile and soulless. But what if you could stay at the equivalent of a hotel for the ill? Hospitals used to compete for patients (and physicians) by advertising their amenities, as in these two print ads from the pink pages of the 1905 Register and directory of physicians and surgeons in the state of California, to which is added a directory of physicians and surgeons of Oregon and Washington and a directory of California State Nurses' Association (and some other stuff too, like maps and legislation, but they couldn't squeeze all of that onto the title page and still have room for the logo of the Medical Society of the State of California...) 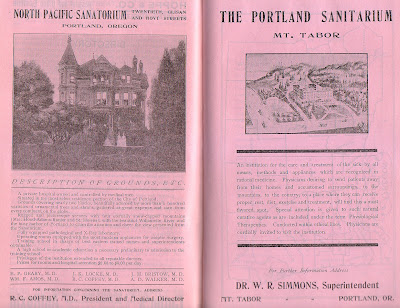 The North Pacific Sanatorium notes that it is "situated in the most select residence portion of the City of Portland" (hospitals make great neighbors!), while the Portland Sanitarium implies that it is located in the mountains (although I hardly think Mt. Tabor qualifies).

What do you think? Would you be less afraid of getting sick if you had a relaxing locale such as these to which you could retire to get well?
Posted by Sara Piasecki at 9:39 AM