Dr. Grossman Goes to Washington: "Thank you again for inviting me"

As we have mentioned a few times previously, Dr. Charles Grossman, MD, has slowly been depositing some of his personal papers here in Historical Collections & Archives, usually a folder at a time, hand-carried on his way from Tuesday morning Medicine Grand Rounds to his car.

Recently, he brought us a small packet of correspondence, the unifying theme of which seems to be political figures. Included is a copy of a letter Grossman wrote to Lawrence F. O'Brien, Special Assistant to the President, dated August 11, 1965. In it, Grossman asks O'Brien to thank President Johnson for inviting him to attend a bill signing at the NIH. But, being Charles Grossman, he also felt compelled to offer a few tips on how the White House might improve such events for the participants:

In view of some of the comments I overheard while there I have wondered about passing them on to you or just forgetting them. You did collect some important medical people for the occasion, including many medical school Deans, yet there was no real integration of them into the program. They were invited up on to the platform into line with the Diplomats, and after standing in line conspicuously for ten minutes, they were summarily dismissed. The few I had a chance to talk with were not very happy about having made the effort to come. If only a few minutes had been taken by the President, or by Secretary Celebrezze, or Dr. Terry or even Dr. Shannon to relate to the group of doctors, I think the net result would have been far superior in terms of public relations.

Many of these medical Deans are Republicans and may not want to think kindly of a Democratic administration even though they and their institutions have the most to gain from the Health Research Facilities Amendments. Perhaps if the President were to send them brief notes thanking them for participating, it might help.

No response from O'Brien is included in the folder.

When he dropped this off, Dr. Grossman did tell us an anecdote about that same trip to the White House: Oregon Senator Wayne Morse, with whom Grossman was on close terms, lent Grossman his car to visit the NIH again the next day. Being a doctor, Grossman felt no compunction about walking right into the building and beginning an unguided tour. After a few minutes of looking around, he was headed back down to the first floor when he saw three men coming towards him: President Johnson and two others. Grossman, being Grossman, stuck out his hand and introduced himself, noting that he had come on the President's own invitation.

And that's when the two other gentleman picked Grossman up under the arms and carried him to the elevator, sending him down to the building exit. Grossman told us: "But I shook his hand! They were all bloody! Not literally, of course, but with the blood of the war!" Did you mention that part of it to Johnson, I asked? "No," said Grossman, "I didn't think that would be polite." 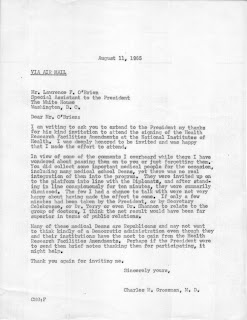 Posted by Sara Piasecki at 2:05 PM

I found this site using [url=http://google.com]google.com[/url] And i want to thank you for your work. You have done really very good site. Great work, great site! Thank you!