What is an iron lung? 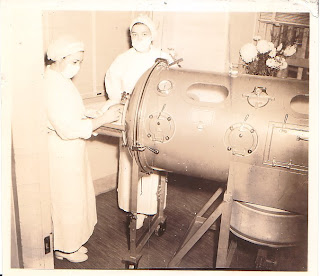 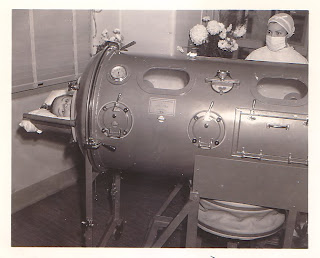 The answer: a negative pressure ventilator, requests for pictures of which we get on a regular basis. Since we recently received a couple of photos of the old iron lung in use here at Doernbecher Memorial Hospital for Children in the 1950s, it seems like a good idea to get them out there. So, here they are.

Rumors of the continuing existence of said machine on this campus, say, in one of the capacious storage areas scattered around the hill, are unsubstantiated. We'll let you know if someone offers to donate one.

In the meantime, you can get more information on iron lungs (and the polio that most frequently required their use) from the University of Virginia's very cool online exhibit. Other good sites have been created by the National Museum of American History and the Kansas State Historical Society.

The resurgent interest in the iron lung parallels renewed efforts to eradicate polio by groups like the Gates Foundation and the World Health Organization. On an editorial note: it seems like anyone who lived through the polio epidemics of the first half of the century, or anyone who knows a little about medical history, understands the risk polio poses--a risk greater, most think, than that posed by the potential complications of inoculation. One can only hope that contemporary efforts to wipe out polio are equipped with as much sociological awareness as medical data and syringes.
Posted by Sara Piasecki at 1:40 PM