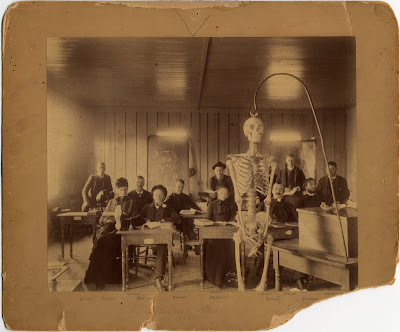 [Image of Willamette University Medical School assembly room, 1886]
Posted by Sara Piasecki at 9:53 AM No comments:

At long last, the podcasts of the two lectures delivered in conjunction with the Portland showing of the traveling NLM exhibit Changing the Face of Medicine: Celebrating America's Women Physicians are now available from the Multnomah County Library podcast web site.

Scroll down a bit to find the lectures, one on the history of women in medicine and the other on Esther Pohl Lovejoy, MD. The videos can be downloaded directly from the links below or from the library site. Enjoy!

Esther Clayson Pohl Lovejoy, M.D.: Changing the Face of Medicine in Oregon and Across the World
Learn about Esther Clayson Pohl Lovejoy, M.D., an 1894 graduate from the University of Oregon Medical School and a key figure in Progressive era Oregon public health and suffrage campaigns. Kimberly Jensen, professor of history at Western Oregon University and author of Mobilizing Minerva: American Women in the First World War, traces Lovejoy's accomplishments, from medical service in World War I to directing and expanding the American Women's Hospitals, an international medical relief service for civilians and refugees. As organizer and first president of the Medical Women's International Association, Lovejoy developed an international vision for cooperation among medical women, which continued throughout her life.

Keynote Lecture: A Brief History of Women in Medicine
The mark of the woman physician through history has been one of hardship, distinction and accomplishment. Sima Desai, associate professor of medicine in the Division of Hospital Medicine at Oregon Health & Science University, highlights the challenges and successes of both the women and the institutions that made a difference for and in medicine. Historically, women held important positions in medicine, and their wisdom and healing were widely sought. When societal norms changed in the 17th and 18th centuries, however, they were driven out of the profession. Hear how they rose to prominence in preventative medicine during the late 1800s, and about the larger inroads made by women in the profession during the 20th century.
Posted by Sara Piasecki at 10:34 AM No comments:

Dr. Peter Goodwin, OHSU Oral History Program interviewee number 104, has recently returned his edited transcript for final processing. Rereading the record of the session, I was struck anew by Goodwin's self-deprecating manner and the display of humility, hard-earned through long experience in both South Africa and the United States. Take, for example, these comments on hubris in medicine:

We had an excellent experience delivering babies at home as part of the OB rotation. Which was a most interesting experience. Because these were poor people, almost all of them colored, in their homes, in an area of Cape Town that was called District Six. Which was quite a hazardous area. A lot of crime, because it was very poor. But we were immune from that. We were recognized as, you know, succoring the poor, doing good. So we were never interfered with. And it was a very interesting experience.

But so much of it was so, you know, sort of, with such a level of certainty that you sort of left medical school with the feeling that you knew it all. And in fact, when you saw very little going into a rural environment. I knew nothing about, nothing worthwhile about psychiatry or psychology. I had been taught nothing worthwhile about public health, which was crucial in the environment that I went to.

And so it took, when I look back on that experience of this great young doctor, and I think about the errors that I made. And the errors not in a, not just in an individual sense, in a social sense. I was so busy giving black kids fluid, you know, sort of to help their gastroenteritis. And I never thought about why they were getting so much gastroenteritis. You know, a lot of them died as a complication of measles, but there was no immunization against measles at the time. And so the public health issues, I ignored. I was too busy being a hero.

SIMEK: In your rural practices, among the poor and the undereducated, did superstition play a role in medical care?
GOODWIN: Hugely. Hugely. And again, Matt, I tell you, I am so ashamed of myself for my reaction to that sort of alternative healthcare. I mean, I used to mock it. I used to mock.
SIMEK: What was it? What did it consist–

GOODWIN: Well, it mostly consisted of witch doctoring. So there were these folk healers who probably had more psychological knowledge than I did. But for example, I can remember, again, I can remember several examples of my hubris. Woman comes in, she’s got congestive heart, she’s in severe congestive cardiac failure. So I see all the marks that, and the witch doctor accompanied her. And because, they’re so fascinating. Anyway, I’ll tell you—never mind. But I will tell you why. Because her husband had sheep, he has more sheep, flock of sheep, on the location. So they had come in from the location and the witch doctor accompanying them. The price of wool had just escalated tremendously to I think it was up to 200 pence a pound. And this guy’s wool had become valuable. And I kid you not, we used to charge them ten shillings for all hospital admission and treatment. So it was just a single fee of ten shillings. Often we didn’t charge them.

So I charge this woman ten shillings. I kid you not, her husband pulled out a roll of notes that were about that thick. [laughs] It was really amazing. And of course, that was why the witch doctor probably came with him.

But that was it, you know. I looked at these cuts that he had made, these ritual cuts. Idiot.

GOODWIN: Well, she went into hospital. She turned out to be, if I remember rightly, I may be making this up. But it turned out that she was incredibly anemic because she’d had severe menstrual bleeding. And we, I can’t remember, I mean rarely, we rarely gave patients blood because we had no facilities to do so. And if there was a real emergency, we would get, we had, probably twenty people who would volunteer to come in if we needed blood urgently. And it was almost, it was very rare. Perhaps three times in the time that I was in Queenstown, this rural town that I practiced in.

The complete is available for research use by contacting us directly.
Posted by Sara Piasecki at 11:31 AM No comments:

We're happy to announce a new accession to the archives, the Arnold L. Towe Collection. Although the collection is still unprocessed, we can say that the approximately six linear feet of materials are primarily reprints and other research resources pertaining to the somatosensory system, and that many of the reprints are signed by the author(s) to Towe.

The collection's journey to Historical Collections & Archives, and the path we took in deciding to keep these materials, are both somewhat unusual.

Arnold L. Towe (1927-2002) was a noted neuroscientist who devoted the better part of his career to investigations of the behavior of single neurons and evoked extracellular field potentials in the somatosensory portion of the central nervous system. A member of the Dept. of Physiology and Biophysics at the University of Washington for thirty years, Towe was a mentor, colleague, and friend of many neuroscientists in the United States and elsewhere.

You'll notice that his CV did not include a stint at OHSU, or indeed in Oregon. How these four storage cartons come to the History of Medicine Room? It all starts back in February of this year, when the OHSU Neurological Sciences Institute shuttered its doors. We were invited to come in to the NSI Library to select books for the historical collections; while we were there, we discovered two boxes of archival materials pertaining to the life and work of Robert S. Dow under the desk. A short time later, we received some records of the functioning of the Institute from outgoing director Jeri Janowsky, PhD.

As NSI staff cleaned out the last of the spaces in the building, the boxes of Towe's research came to light. Bobby Heagerty, coordinator of the Portland BRAINet Friends Group, secured the materials in the Dept. of Neurology and contacted us for delivery. When the boxes arrived, I began looking for information on Towe and his possible connection to OHSU. After a few conversations with senior neurologists in Portland, I was given the name of Dr. Robert Grimm, a neurologist in practice here at Legacy. Not knowing Dr. Grimm, I sought an introduction from a colleague, and--at long last--had a chance to speak with him directly last week.

It was Bob Grimm who had Towe's papers brought here to Portland; after his mentor's death, Grimm felt it was imperative that his research be saved, if possible. Why did Towe have so many reprints, when some researchers are content to rely on databases to relocate old citations? According to Grimm, Towe was adamant about the necessity of collecting and maintaining reprints, requesting them directly from the authors before the print was dry on the journal pages. We have a few faculty like that here at OHSU; perhaps you, too, know some where you live.

Dr. Grimm, and we here at HC&A, agree that this collection not only sheds light on Towe's research and work habits, but also provides a window into a small, tight-knit community of specialists, tracing the lines of scholarly communication between researchers across the globe. We think that future scholars of the history of science will also agree, and so we're happy to devote a little shelf space to this notable northwest neurologist.
Posted by Sara Piasecki at 12:11 PM No comments: 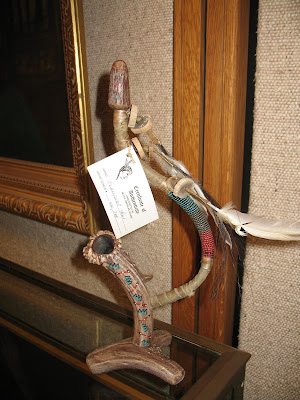 Just in time for today's Native American Tribal Summit, going on here in the Old Library building at OHSU, we have received another fantastic piece of American Indian art!

On Friday morning, Barbara Gaines brought us the peace pipe given to former School of Nursing Dean Carol A. Lindeman. Presented at the 1995 conference of the National League for Nursing, the peace pipe and accompanying headdress were given to Lindeman as she stepped down from the NLN presidency. The items are traditionally given to a leader who must know when to make war and when to make peace--a skill that Lindeman herself exercised numerous times in her career.

Both pieces now enjoy pride of place on the glass display case in the History of Medicine Room, flanking the portrait of Bertha Hallam and (for the time being) looking down on reproductions of da Vinci's anatomical drawings.

Today's Summit is an opportunity for tribal leaders and OHSU faculty and staff to explore ways to work together to advance health care delivery and education and to eliminate health disparities among the state's Native American populations.
Posted by Sara Piasecki at 11:34 AM No comments: