A reminder that today at 12:15 in the OHSU Old Library Auditorium, we will be kicking off the 2008-09 season of the OHSU History of Medicine Society Lecture Series. The event is free and open to the public, so please join us!

Dr. Aminoff has been a member of the faculty at UCSF since 1974. His special interests include clinical, diagnostic, and treatment aspects of Parkinson’s disease; control of movement; and cognitive disturbances in patients with movement disorders. He is the author of more than 190 original research publications and numerous books (including a biography of Brown-Séquard published in 1993) and recipient of the Queen Square Prize for research in (1973) and the Royer Award for contributions to the advancement of neurology (1991). He is a member of several editorial boards of journals, is editor-in-chief of the medical and scientific journal Muscle & Nerve, and is series editor of the monumental Handbook of Clinical Neurology. He is also a director of the American Board of Psychiatry & Neurology.

Dr. Aminoff’s visit is being sponsored in part by the OHSU Dept. of Neurology.
Posted by Sara Piasecki at 7:00 AM No comments: 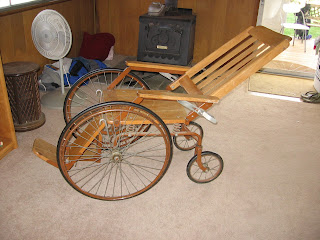 A local community member has contacted us for some information about an antique wheelchair in her possession. The piece, which has a wooden back and seat but wire-spoked wheels and pushrims, bears property stamps from the University-State Tuberculosis Hospital and the Portland Center for Hearing & Speech. Given that the Tuberculosis Hospital was first opened here on Marquam Hill in 1939, it would seem that the chair must date from the late 1930s or early 1940s at the latest. A manufacturer's label, "Arrow, Erie, Pennsylvania," hasn't yet allowed us to narrow the date further.

A check of the literature for the history of wheelchair design turns up surprisingly little. The most comprehensive source still seems to be Herman Kamenetz's 1969 work, The Wheelchair Book. The author lays out an impressive amount of information about the evolution of the wheelchair, from ancient times to his own day. We learn that the first commercially produced wheelchairs in the United States became available in 1890; that the bicycle craze of the Gay Nineties and the increased availability of rubber tires allowed for the replacement of iron rims on wheelchairs; and that the first extant report of the use of wheelchairs in America comes from the Civil War, when the chairs were used to transport sick and wounded soldiers.

Unfortunately, Kamenetz's well-illustrated book does not include any images of a chair similar to that belonging to our patron. If anyone out there can definitively date this item, please let us know!
Posted by Sara Piasecki at 9:34 AM 3 comments: 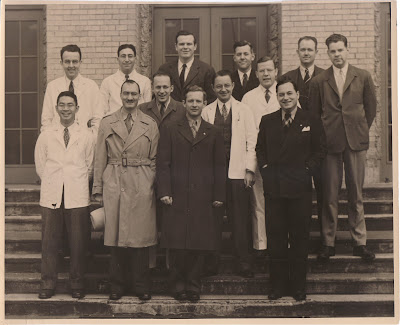 This morning, while peeking into one of about thirty boxes of materials left by a former library staff member, I came across a folder of photographs donated to the library in 1984 by Mrs. Frank Queen. Frank had been a faculty member in the Department of Pathology at the University of Oregon Medical School for thirteen years in the 1940s and 1950s, and so the small collection includes two photographs of pathology faculty: one group shot, taken in December of 1946 (that's Frank in the front row, far right) and one of Warren Hunter, department chair, at the microscope.

Also included are five aerial shots of campus in the 1940s and 1950s. Having been liberated from the cardboard enclosure they sat in for the last 24 years, these photos will be sleeved and added to the Historical Image Collection.

Let's all try to get along

The code, intended to "provide a better understanding of the mutual responsibilities between physicians, hospitals, and the news media," was modeled on an amended version of the code adopted by Colorado's medical and journalistic communities.

The code proper is prefaced by a preamble with a statement of principles, and followed by the OAH's "recommended guide for hospitals in giving information to the news media" (e.g. no. 7: "Unconsciousness: (A) if the patient is unconscious when he is brought to the hospital, a statement of this fact may be made; (B) the cause of unconsciousness, however, may not be given.")

The preamble sets out the general parameters under which parties should function, to wit:

...the news media agree:
1. to consult qualified sources for medical stories...
2. to present fairly and accurately news thus gathered... [begs the question of balance?]
The doctors and the hospitals agree:
1. to be available to news media...
2. to cooperate without mental reservation or personal exception with the Code and with the news media.

The compilers of the code obviously saw the potential for misuse of the media by celebrity wannabes, cautioning that

If, on either side, the Code is corrupted to provide personal glorification--and only that--for a doctor, an institution, a writer or a news medium, it cannot function.
If it becomes a weapon of reprisal, prejudice, or personal annoyance, it is useless.

The code was revised and reissued at least once since this 1956 launch; one sometimes wonders whose rules everyone is playing by these days...

On a related note, see today's Oregonian coverage of PETA's animal cruelty charges against the Oregon National Primate Research Center here; and see the university's response to the same charges here.
Posted by Sara Piasecki at 10:11 AM No comments:

So, you want to get married?

We received another box of goodies from the nursing historian-in-residence, Barbara C. Gaines, RN, EdD, author of the history of the OHSU School of Nursing. An accrual of sorts to a collection she donated in August, this small box contains some really fantastic tidbits from the school's history--including the memo formalizing new rules about married students on campus: 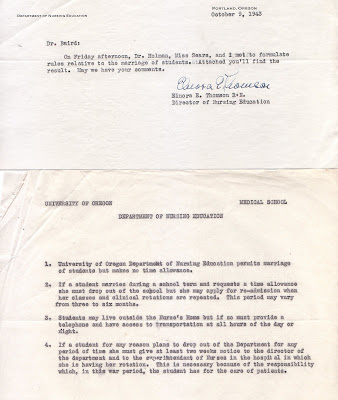 "University of Oregon Department of Nursing Education permits marriage of students but makes no time allowance." Do you suppose there were many ceremonies performed right there in the surgical theatre as other students looked on? They were already wearing white, after all...
Posted by Sara Piasecki at 2:17 PM No comments: