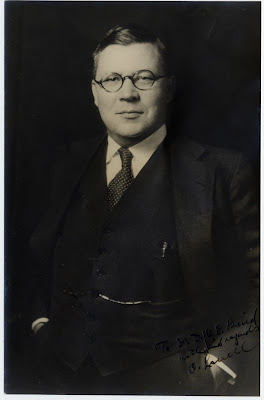 OHSU Historical Collections & Archives announces the opening of its new exhibit, Olof Larsell, Biologist, Anatomist, and Historian: A Noble Quest, now on display in the main lobby of the OHSU Library.

Olof Larsell was born in Rättvik, Sweden, in 1886, and moved with his family to the United States in 1891. He obtained a degree in biology from McMinnville College (now Linfield College) and completed a doctorate in the biological sciences under the direction of zoologist William A. Locy at Northwestern University. During the summers of 1913 and 1914, Larsell worked with C. Judson Herrick, then professor of neurology at the University of Chicago; Herrick encouraged Larsell to focus his research on comparative neurology and, in particular, cerebellar anatomy. Larsell’s first paper on the cerebellum was published in 1923; at the time of his death in 1964, he was completing the last chapter of a definitive, three-volume monograph on The Comparative Anatomy and Histology of the Cerebellum.

Many alums and senior faculty on campus still remember Olof Larsell, whose classes they recall as either “inspiring” or “awful.” His magisterial work on medical history, The Doctor in Oregon, remains the most comprehensive work in the field.

To learn more about Olof Larsell and his remarkable achievements, visit the physical display in the Main Library or the virtual exhibit on the Historical Collections & Archives web site.

Materials will be on display through December 2008. Items were drawn from throughout the collections, including the Olof Larsell Papers (Accession No. 1999-011), the Pacific Northwest Archives, and the recently acquired Casey Bush Robert Dow Collection. Questions about the exhibit can be sent to homref @ ohsu.edu
Posted by Sara Piasecki at 2:21 PM No comments:

Presidential candidates square off! No, not last night's debate, but a new batch of records we have just received from the OHSU Office of the President and Community Relations. In 1977, the departure of the university's first president, Lewis Bluemle, MD, set off a nationwide search for a replacement. Over 170 people responded to the job ad, and files were kept on each applicant. Those records, plus a host of other key documents (Executive Staff minutes, UOHSC Advisory Council documents, Board of Overseers minutes) arrived at Historical Collections & Archives in twelve unassuming boxes.

A bonus thirteenth box contained a mix of photographs of campus personalities and events from the 1950s to the 1990s, including more shots of Ronald Reagan during his 1951 tour of campus, snaps from faculty parties over the years, and a batch of photos of the Rose Festival Junior Court during their visit to Doernbecher Children's Hospital in 1994. Adorable! 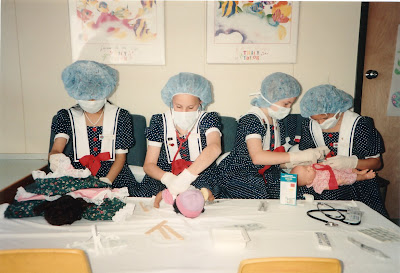 Posted by Sara Piasecki at 12:02 PM No comments:

Gas crunch: then and now

Looking through some old clippings books for news coverage of the January 1942 Portland visit of the Committee on Aviation Medicine (nothing so far), I came across this blast from the past, which will certainly resonate with today's commuters: 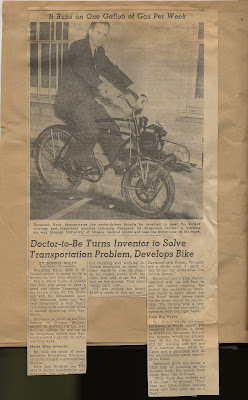 Posted by Sara Piasecki at 9:10 AM No comments:

The effort to track down some information about a trip to Oregon made by Dorothea Dix in 1869 has led to more and more interesting tidbits (although, not so many about Dix).

One of the first resources to offer a glimpse into the world of politics and medicine that shaped the state's early treatment of the insane came from Robert J. Gould's 1941 paper on the Oregon Hospital for the Insane. Another has come from the 1995 thesis by Ronald Rudy Higgens-Evenson, Parties, patronage, professionals, and the state: a history of Oregon institutions, 1859-1900 (I'm a sucker for alliterative titles!). In it, the author devotes a chapter to public health policy and the Oregon Insane Asylum. After setting the stage with an overview of psychiatric treatment policies across America in the late 19th century, Higgens-Evenson notes:

Despite its significance as a State institution, however, the Oregon State Insane Asylum has attracted little historiographical attention. The only study of the asylum ever undertaken, Olof Larsell's 1945 "History of Care of Insane in the State of Oregon," focused on the success of that institution in caring for its inmates, but offered little insight into the political context that made such success possible.

Olof Larsell?! Of course, any casual reader in the history of medicine in Oregon should have guessed that Larsell would have written on the asylum, and it's no surprise to know that he was the first and only to publish such a study (at least until 1995).

Some sections of Larsell's paper, which appeared in the December 1945 issue of the Oregon Historical Quarterly, read a lot like Gould's 1941 paper. This is understandable, since Larsell actually started the Medical History Club at which Gould presented, and since Larsell was almost certainly Gould's professor for some significant portion of his education at the University of Oregon Medical School. Lest we think that Larsell just ripped the young man off, let me hasten to point out that the article greatly extends and amplifies Gould's study, taking the history of psychiatric treatment in the state from 1808 through the 1940s.

Two fascinating facts jumped out at me from the article:

1. The Alaska connection.
Larsell writes: "The gold rush to Alaska, beginning in 1897, had burdened the federal government with responsibility for gold seekers whose minds broke under the hardships and strain of their search for quick wealth. The nearest mental hospitals were at Steilacoom, Washington, and Salem, Oregon. On January 16, 1901, the Oregon State Insane Asylum, at the request of the United States government, entered into a contract to care for the Alaska insane at $20.00 per month per patient."
Larsell goes on to suggest that this contract was renewed one time, again for a year, in 1902. No mention is made of the Morningside Hospital here in Larsell's narrative, but surely some of these same forces were at work in Morningside's contract with Alaska to care for the mentally ill. (See earlier posts on the Morningside Hospital here.) All Larsell knew for certain was that "sometime prior to 1904 the Department of the Interior had entered into negotiations with Doctor Coe [of Morningside] with reference to the care of the insane in Alaska."

2. We're not the only ones who find it confusing.
The dearth of information on state psychiatric facilities available to researchers today can be very frustrating--to researcher and librarian alike. It is therefore reassuring to know that we're not alone: Larsell, master historian and medical insider, found it equally difficult to determine the true number and nature of many of the local institutions. Near the conclusion of his study, he writes: "After the Morningside Hospital was established the Mt. Tabor Sanitarium was discontinued, to be followed by a number of other private institutions whose history is confusing." He names the Mountain View Sanatorium, the Waverleigh Sanatorium, and the Mindsease Sanatorium as examples of these smaller hospitals. One can only hope that time will reveal more of the secrets of these facilities.

Stay tuned for more inside information on Larsell, the man, the myth, the medico, in the upcoming exhibit: Olof Larsell (Biologist, Anatomist, and Historian): A Noble Quest being installed at OHSU later this week.

P.S.: It has become clear that whatever Dorothea Dix might have done while in Oregon, addressing the state Legislative Assembly was not one of them. In that era, the biennial legislature was meeting in even years only, not today's odd years. Thanks to Jerry Curry at the Oregon State Library for that information!
Posted by Sara Piasecki at 2:09 PM 2 comments: 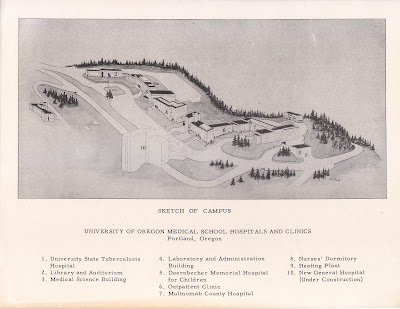 In honor of Columbus Day, a comparison of campus maps old and new. 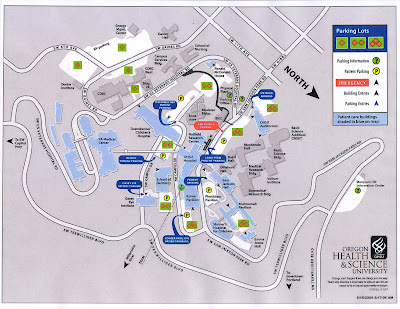 Posted by Sara Piasecki at 9:27 AM No comments: