Homeostasis for the body politic

As we approach Election Day, political discourse seems ever more present. The recent downturn in the financial markets and conflicts around the world turn one's attention to the imbalances in society. Even in medicine, one cannot escape considerations of the health of nations and analogies between the human body and the body politic.

In 1939, Walter Cannon published a revised and expanded edition of his 1932 work The Wisdom of the Body, a study of homeostasis in human physiology. In an epilogue, he applies these physiological principles to politics, musing on the "Relations of Biological and Social Homeostasis." His remarks are particularly interesting in light of current events.

For the present adhering fairly strictly to physiological considerations (i.e., to the supplies of food, shelter, etc.) we are forced to recognize that the homeostasis of the individual human being is largely dependent on social homeostasis. ... There are other needs, however, which in the long run are quite as urgent as the needs for water and oxygen, and which at times cannot be satisfied because of the lack of social stability. These are the elementary requirements of food and of shelter (clothing, housing and warmth), and the benefits of medical care. To specialized workers in the social organization, limited and segregated as they are by their specialization, so that they must rely almost wholly on social homeostasis, disturbances of that homeostasis may be seriously harmful. Not only may the bodily needs be inadequately supplied, but in addition there may be suffering because of a loss of a sense of security. ...

The social organism like the animal organism is subject to disturbances, some imposed from without, some due to its own activities. ... A new machine may be invented which, because it can do the work of thousands of laborers, throws thousands of laborers out of their jobs. Thus they lose for a time the opportunity to earn the money which they must have in order to take from the stream what they require. Or there may be an excessive production of certain goods so that they do not move in the stream but accumulate; or such goods have a value so much reduced that they bring little in exchange, and consequently other exchangeable goods accumulate; or men may become apprehensive of future security so that money is not used to take goods from the stream but is hoarded, and again goods accumulate; or credit may be withdrawn, which has the same effect of retarding the usual processes of trading. ... In these various types of disaster the individual members of the social organization are not responsible for the ills which circumstance forces them to endure. As more or less fixed units, performing specialized tasks in a complex system of tasks, they are incapable of making quick adjustments to new conditions as they arise. ...

The organism suggests that stability is of prime importance. It is more important than economy. ...

The organism suggests, also, that there are early signs of disturbance of homeostasis which, if sought, can be found. These warning signals are little known in the social organism, and yet their discovery and the demonstration of their real value would make contributions to social science of first-rate importance. ...

As a Lord Chancellor of England has declared, and his declaration has been approved by a Justice of the United States Supreme Court, "Necessitous men are not, truly speaking, free men."

Posted by Sara Piasecki at 2:22 PM No comments:

I've gotten more than one comment on yesterday's image, including one from a fellow blogger who shall remain nameless but whose own blog has a rather risque title. The comments inspired me to share something formerly stored in The Closet. You know, The Closet--you may know the location of the one in your favorite library--the closet where all the "erotica" is kept.

So, now that I've piqued your interest, here it is! 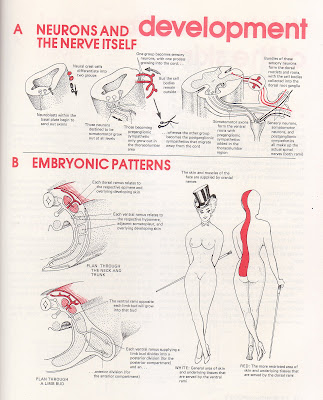 Not so exciting, huh? A little like Mr. Peanut, even, isn't it? And yet, this was long ago selected for placement in special collections due to its racy nature and the likelihood of its theft. Human beings may remain anatomically the same (although you might not know it from some of these fine drawings by Robert H. Ullrich), but our tastes sure change....

(Image from David A. Langebartel, The anatomical primer, 1977)
Posted by Sara Piasecki at 1:19 PM No comments: 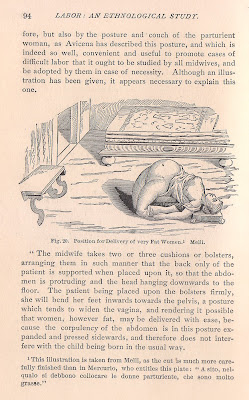 Posted by Sara Piasecki at 10:47 AM No comments:

Short history of the institutionalization of the insane in Oregon, to 1941 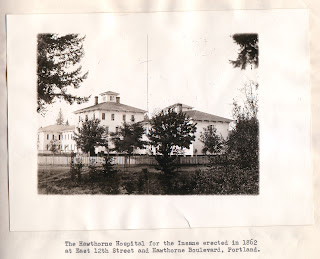 A caller's request for the complete transcript of a speech made by Dorothea Lynde Dix to the Oregon Legislative Assembly "sometime in the mid-1800s" has had us on a hunt this morning, and has led us to a short paper written by Robert J. Gould in 1941 for the Medical History Club of the University of Oregon Medical School. History of the Northwest's first insane asylum chronicles the career of J.C. Hawthorne, superintendent of the Hawthorne Hospital for the Insane, and his often contentious dealings with the state legislature.

In a short aside, the paper does refer to a trip made by Dix to Oregon in 1869 to visit the asylum, but includes no hint as to whether she addressed the legislature at the time. However, Gould does give the reader a sense of the political dimensions of early efforts to isolate and treat the insane. We learn, for example, that while Hawthorne publicly supported proposed legislation to establish a state hospital for the insane, he actively lobbied against the same legislation--and admitted as much during questioning by a congressional committee. Even contemporary observers remarked that "Dr. Hawthorne was too powerful and the state too weak to be able to stand on its own." The truth of this statement can be seen in Hawthorne's state stipend: in 1877, when his hospital housed 230 patients, Hawthorne was being paid $70,000 a year, IN GOLD, which amounted to 52% of the state's income at that time. If anything were to call for congressional questioning, I would think that would!

In conclusion, Gould sums up the history of psychiatric treatment in Oregon in a quick time line:

In 1850, although there were laws originating with the provisional government for the care of the insane, nothing was done about them, and they roamed the country terrorizing women and children and in turn were the subject of ridicule.

In 1860 they were arrested and farmed out to the lowest bidder for use as menial labor.

In 1863, the insane were institutionalized by virtue of a contract with the State of Oregon to Dr. J.C. Hawthorne, who at his own expense had built a hospital for their care.

In 1883, the State Asylum was occupied, and the State took over the care of these insane directly....

Let us look into the past with interest and understanding, and toward the future with hopeful, intelligent efforts to prevent man's greatest misfortune--the loss of reason.

Posted by Sara Piasecki at 9:08 AM No comments: