Some time ago, we posted a little information on Oregon nurse Doris Burnette Harris Merritt, servicewoman with the 46th General Hospital in World War II and accomplished oil painter. This week, her family contacted us again to let us know that Doris has become a founding member of the Women in Military Service for America memorial (WIMSA) in Washington, D.C.

So, in celebration of Doris, Oregon's nursing history, and all the women who have served this nation in times of war, we now recognize the nurse corps of the 46th General Hospital, shown here at Ft. Riley, Kansas (click for a larger image):

Posted by Sara Piasecki at 11:04 AM No comments: Links to this post 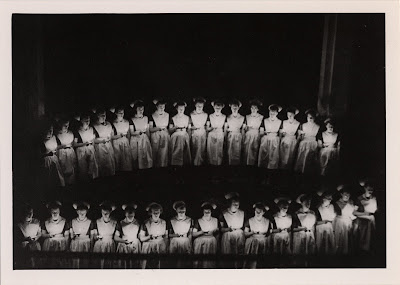 The 25th annual conference of the American Association for the History of Nursing kicks off today in Philadelphia with programs and events that celebrate a quarter century of scholarship in nursing history.

For those who cannot attend the conference in person, the AAHN web site contains a wealth of information about nursing through the ages, including photographs of objects, lists of recent publications, links to other nursing history sites--even photos of the Gravesites of Prominent Nurses!

The Association has been a strong advocate for the inclusion of history in the nursing curriculum; its position paper is available on the web site for anyone wanting to make a case to university administrators. While the OHSU School of Nursing does not offer any formal courses in the history of nursing at present, the complete history of the school itself is available online for those who are interested in local developments in nursing education and practice.

And, of course, we have materials here in Historical Collections & Archives that support the study and teaching of nursing history, including this list posted in July. Shown here in this post is an undated photograph of the capping ceremony at the University of Oregon Medical School Department of Nursing Education.

A side note: Appropriately enough, my title was officially changed yesterday from History of Medicine Librarian to Head, Historical Collections & Archives. The new position title more accurately describes the broad scope of our work beyond just history of medicine to the history nursing, dentistry, and the allied health sciences, as well as the institutional history of OHSU, and medicine and society in Oregon and the Pacific Northwest. Still no parking space, though!
Posted by Sara Piasecki at 12:07 PM 1 comment: Links to this post

A recent addition to the Historical Image Collection comes to us from the OHSU Foundation, where staff found a small stash of photographs in a storage area. Many of the images are "beauty shots" of labs, clinical areas, and campus buildings, or photographic portraits of key donors and faculty. A small percentage are construction photos, documenting the rise of the Marquam Hill campus. Here, for example, is a new perspective on the University of Oregon Dental School construction in the 1950s: 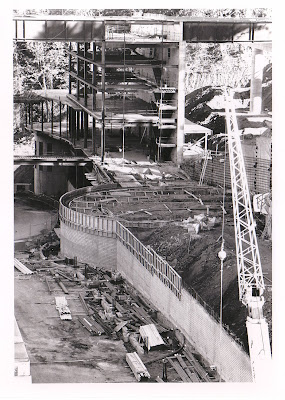 A different sort of foundation is being laid by these nurses, shown learning to make a bed: 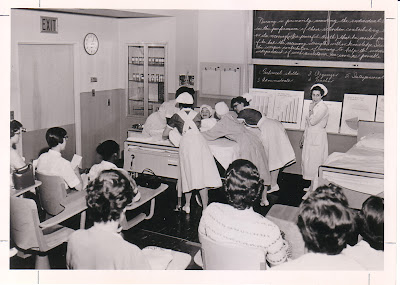 Posted by Sara Piasecki at 7:00 AM No comments: Links to this post 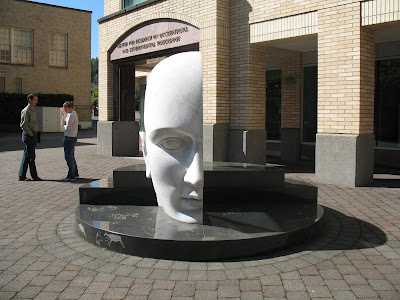 During the course of my career at OHSU, I have never seen or heard reference to the sculpture located in the courtyard in front of the CROET as anything other than the "half-head." Probably because it is, in fact, a half a head.

Today, I learned its true name: Vita Mensae. Created in 1993 by artist Larry Kirkland, the piece has become a campus landmark and popular point of rendezvous for faculty and students. In the 1999 book Larry Kirkland: twenty-five years, essayist Kenneth R. Trapp writes: "The Head is at the crossroads of the research crescent at OHSU. Etched into the plinth are images which document the history of creative thinking and celebrate diverse concepts which have generated meaning throughout time."

A patron wondering about the symbolism included in the sculpture contacted us for information; we in turn called on our knowledgeable friends from Community Relations who clued us in to the existence of several framed pieces in the glass lobby of the CROET which explain something of the history and design of the building and the art installation outside its doors. In the text concerning Vita Mensae, we have the following quote from Kirkland:

The mind is the voyager of journeys, the center of questioning, the conjurer of fear, the seed of desire, the door of compassion, the creator of joy.

The only mention of the symbolism employed in the piece is a general statement that the plinth contains "images from throughout the ages and diverse cultures of the world," but nothing about the reasons behind the inclusion of certain elements over others.

My questions for the artist would be twofold: is there significance in depicting the right side of the head, rather than the left? And, would it more appropriately be called Vita Mentis? Or does the title rather celebrate the notion that food and conversation inevitably lead to great discoveries? Or the tie between religion and science?

Read the full text of the explanatory plaque below: 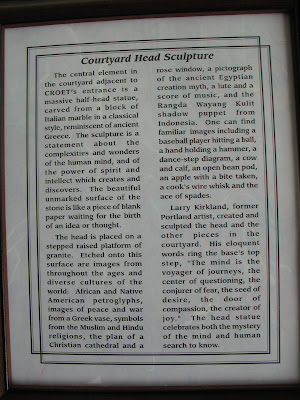 Posted by Sara Piasecki at 2:38 PM No comments: Links to this post 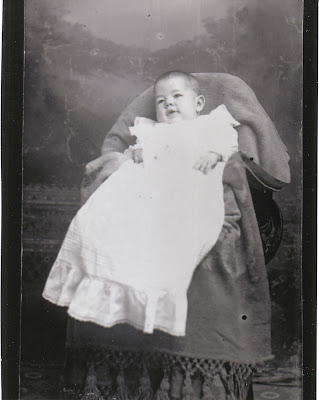 Last week, we made a trip to Legacy Holladay Park to receive a new donation of materials relating to Robert Stone Dow, MD, PhD. There, we met with Casey Bush and Roger P. Simon, MD, the Robert Stone Dow Chair of Neurology at the Legacy Research Robert S. Dow Neurobiology Laboratories.

Mr. Bush is author of Inside the black box: a biography of Oregon neuroscientist Robert Stone Dow, with which Dow fully cooperated. In the process of researching Dow and his role in neurology in Oregon, Bush collected correspondence, publications, photographs, and other materials. Included in the collection are many reprints of the works of Olof Larsell, PhD, with whom Dow maintained a close relationship. Larsell, as regular readers of this blog will know, was a longtime member of the faculty here at the medical school, internationally recognized for his work on cerebellar anatomy, and the grand old man of Oregon medical history (having penned the magisterial work The Doctor in Oregon.)

We received a copy of the biography along with the background materials, and will soon be receiving a DVD of films of Dow, including footage from his trip to study kuru among the tribes of New Guinea. Also, three separate histories of the Dow Neurological Sciences Center and neuroscience research at Good Samaritan came with the collection, including information about a proposed merger between the Good Sam program and the Dept. of Neurology at the medical school.

This collection compliments the materials in the Robert S. Dow Collection (Accession No. 2008-003) and provides a critical link between Dow's activities here at the medical school and at the OHSU Neurological Sciences Institute, and his work at Good Samaritan and other "downtown" clinics. We are very grateful to Mr. Bush, Dr. Simon, and Legacy Health System for depositing these materials with us.
Posted by Sara Piasecki at 3:27 PM No comments: Links to this post