Nursing materia medica, or, An herb for what ails ya 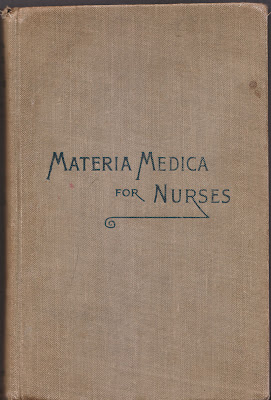 Today's donation is a great contribution to our small but growing history of nursing collection. The third edition of Lavinia Dock's Materia medica for nurses was published in 1904, and was an early attempt to provide nurses with the pharmacological knowledge they needed in everyday practice. In addition to the day's drugs, the book covers organic materials from myrrh to broom-tops and ipecac to arrow-poison.

Lavinia L. Dock was a strong advocate for standardization of nursing practice and a prominent writer of nursing literature. She was also an early historian of nursing; OHSU holds several of her works.

Dock was a bit like our own Esther Pohl Lovejoy: prolific writer, staunch suffragist, and an international figure in her discipline. A biography on the American Nurses Association website tells us that:

[Dock] graduated from Bellevue Training School for Nurses in 1886 and soon after became night supervisor at Bellevue. As both student and supervisor, Dock became aware of the problems students faced in studying drugs and solutions. As a result, she wrote Materia Medica for Nurses, one of the first nursing textbooks. In addition to serving as foreign editor of the American Journal of Nursing, she wrote Hygiene and Morality and in 1907, co-authored with Adelaide Nutting the first two volumes of the four-volume History of Nursing. Volumes III and IV were completed by Dock alone in 1912. During her multi-faceted career, Dock worked with Lillian Wald at Henry Street Settlement and with Isabel Hampton Robb at Johns Hopkins School for Nursing. She was also secretary of the International Council of Nurses for more than 20 years. Throughout her life, she was a devoted suffragette and political activist.

We've got our eye on you

We're starting to take digital photographs of the items in the Medical Museum Collection that were received after 2003 (when the original project was done). Our indefatigable student Ian Terrell took this shot of a far-larger-than-life-size eye: 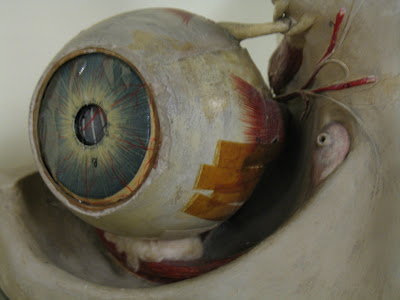 Pictures of several hundreds of our Medical Museum Collection items are currently available in the OHSU Digital Resources Library; stay tuned for additions as this new project progresses.
Posted by Sara Piasecki at 3:08 PM No comments: 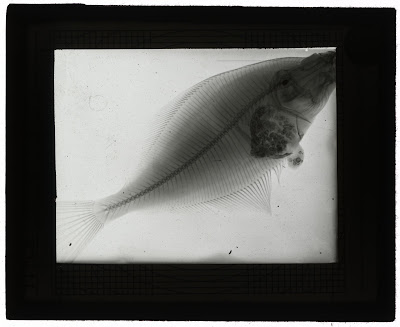 A collection received in August of 2007 has now been processed, arranged, and described--thanks to the efforts of our student worker, Ian Terrell, who cut his teeth on this finding aid.

(The 99 human teeth, from positions U28, L33, and R42, are the first body parts to come into the collections since the skull called "George" was donated by the granddaughter of a dental alumnus in spring of 2005. I'm glad we haven't taken in many urology collections lately...)

Henry Cline Fixott was born on January 21, 1879, in Arachat, Nova Scotia. He graduated from the North Pacific College of Oregon (now OHSU Dental School). Fixott served on the Portland City Council for a time. After eleven years in general practice, Fixott became influenced by Edmund Kell and decided to specialize in radiodontia becoming a pioneer in the field. He became a teacher at the North Pacific College and taught radiodontia, as well as ethics, jurisprudence, economics, and history.

Aside from health organizations, Fixott was a member of The Portland Rotary Club (serving as President ), the Al-Kadar Shrine, and the Aero Club, and was a trustee and treasurer of Good Samaritan Hospital.

More on Morningside: the hospital in pictures

Well, the history and fate of Morningside Hospital and the patients remanded there continue to spur interest among researchers and genealogists. After two more recent requests for information, it seems prudent to post the complete scan of the one news clipping we have in the Subject Files, which was published in The Oregonian contemporary with the sale of the hospital buildings to a developer (June 20, 1968): 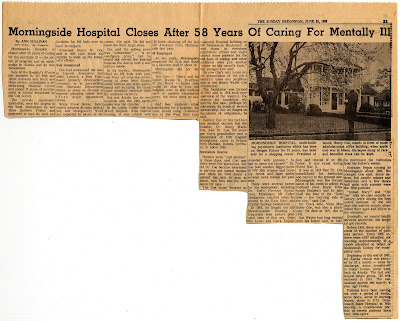 A search of the Oregonian News Index uncovers a number of other articles published about the hospital back to 1920.

Additional information is held at the Oregon Historical Society. A check of their online collections catalog reveals information on Morningside in the Arthur Robert Smith Papers (Mss 1074) and in two scrapbooks compiled by George Himes (D12100 and D18068).

The Multnomah County Library has two published items pertaining to Morningside, including:

As mentioned previously, University of Washington Special Collections holds a short history of the hospital, written in 1920:

In our quest to "get it out there," letting you all out on the web see what we have digitized from the HC&A collections, we have loaded 36 more images into the OHSU Digital Resources Library, all relating to the history of the People's Institute and Portland Free Dispensary, the forerunners of the OHSU outpatient clinics. All the images were digitized for the exhibit on the People's Institute, mounted in January 2007.

Included in this batch are several notable photographs, including one of Portland's first public park, one of Dr. Estella Ford Warner at work in the clinic, and one of African American patients at a well baby screening. Taken in the 1910s or 1920s, the latter photo is one of the very few we have which document the health care services available to Portland's African American community, which numbered only about 1,000 souls at that time (according to this great history, available free online).

More than you'd pretty much ever want to know about the People's Institute and Portland Free Dispensary can be found in the administrative history included in the guide to the People's Institute Image Collection (1999-010), or in the article I wrote for the May 2, 2008 issue of the MSMP's Scribe a few months back. Since that publication is not available online, I here include the full text of that article. Enjoy--or ignore!

In 1931, the Outpatient Clinic of the University of Oregon Medical School opened in a newly erected building on the Marquam Hill campus, outfitted with the latest in medical technology and amenities. Both building and furnishings had been funded by a $400,000 grant from the Rockefeller Foundation, an acknowledgment from the Eastern establishment of the enormous success of what had started as the Portland Free Dispensary, a model of collaboration between Portland's charitable organizations and its medical community.

In 1904, a group of prominent women came together to fund and organize the People's Institute Settlement Work, which would be the city's first attempt to create something akin to Chicago's Hull House, providing social services for the urban poor. By 1907, it was clear that the service most in demand for many of Portland's neediest was health care, and the idea that those who were physically capable of helping themselves would, in fact, do so, became the impetus for the establishment of the Portland Free Dispensary. The People's Institute was already in possession of much of the medical equipment that would be needed, material remaining from the 1906 ef-forts to address the health care needs of refugees from the San Francisco earthquake who had flocked to Portland in the first days after the disaster. This equipment was moved into a space shared with the Boys’ Club, and the volunteer services of several physicians secured.

In 1909, Dr. C.J. McCusker made a report on the Dispensary's activities to the faculty at the Medical School, then located at 23rd and Lovejoy Streets. Soon after, the school agreed to affiliate with the Dispensary on the condition that larger quarters be provided for the clinics. Accordingly, the equipment was moved to five rooms on the lower floors of the Institute’s quarters at Fourth and Burnside Streets.

Here, third and fourth year medical students from the Medical School worked alongside the vo-lunteer physicians. A former student shared her recollections of time spent in the Dispensary clinics, noting that “Some of the most important assistance gleaned by the students from the dispensary is aside from knowledge of medicine and surgery which they gain there. They learn through contact with people who are aided by the organization that medical aid can be benefited by a knowledge of home conditions of the patient and by friendly aid. They are taught that cures are often more easily effected by elimination of aggravating surroundings and mental conditions than by the administration of drugs.”

Forty-one separate clinics were established during this time, including the state’s first well baby clinics. Local hospitals also affiliated themselves with the Dispensary, and many patients were transferred to the Multnomah County Hospital, as well as St. Vincent and Good Samaritan Hospitals. Medical prescriptions were doled out sparingly, and local druggists were enlisted to provide medications to Dispensary patients “in accordance with the individual’s ability to pay”--meaning, oftentimes, free of cost.

By 1916, the five rooms were no longer sufficient to accommodate the growth of services and the Dispensary was moved to a building on the corner of Fourth and Jefferson Streets. In 1921, a local headline declared: “Portland Free Dispensary is building on the principle that a healthful city is a hopeful and a happy city and that the right of every man is health.” By 1923, the Dispensary was seeing up to 165 patients a day and providing over 25,000 treatments per year.

The arrangement begun in 1907 continued for 24 years, until the Dispensary was formally turned over to the Medical School. In February of 1931, all employees of the unit were transferred to the new Outpatient Clinic facility along with the financial resources of the Dispensary, which amounted to $49,421.

In 1939, Valentine Prichard, superintendent of the People's Institute, wrote: "The record of history is that upon the initiative of private philanthropy depends the recognition of public duty. Almost every function now recognized by the state or the city in the interest of social advancement was begun by private initiative. Legislatures and municipalities have little time for originating and testing new programs, and it is here that philanthropy has rendered its most patriotic service by accepting as its mission the awakening and the stimulating of the conscience of the state and the nation."

When the model created by philanthropy and adopted by the state loses its effectiveness, it may behoove us to turn again to the community for a new program.
Posted by Sara Piasecki at 3:05 PM No comments: