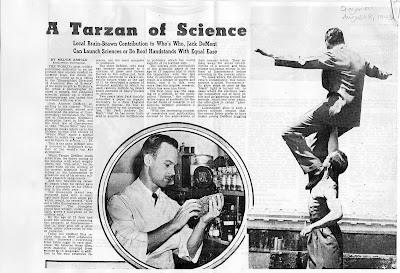 I had occasion today to check the Biographical File of one Jack Andrew De Ment (or DeMent, depending on what you read), onetime Portland prodigy and pioneer in fluorescence research. Included in the file was this fantastic article from the August 8, 1943, issue of the Oregonian, which describes DeMent not only as a "Tarzan of Science," but also as a "knee-pants savant." Boy, they just don't write news like they used to.

In 1943, DeMent was a tender 23-year-old, but he already had "a listing in the 'Biographical Directory of American Men of Science' of the same length as Einstein's"--according to the news article. The young scientist had formulated two of the basic laws of fluorescence, written or co-written five books, become a fellow in the Chemical Society of London, and co-developed a technique for "invisible tatooing"--tattoos visible only under x-ray.

DeMent graduated from Franklin High School and attended Reed College from 1938-1941 (leaving before completing a degree). In 1955, he became a diplomate of the American Board of Bio-Analysts (nuclear physics) and received an honorary doctorate from Western States College. He was a research assistant here at the University of Oregon Medical School from 1948 to 1966. He went on to found the De Ment Labs in Portland and was president of something called the PolyPhoton Corporation. He was associate editor for many years of The Mineralogist, the official publication of the Oregon Agate and Mineral Society. He served as a reviewer for the National Science Foundation in 1979 and 1980.

But, most interestingly of all (to me), is that he personally witnessed the first A-tests on Bikini atoll as a consultant to the U.S. Secretary of War. Unlike Oppenheimer, DeMent seems to have been inspired by this experience--not to limit the spread of nuclear weapons, but to weaponize rain. Yes, RAIN. The plan, apparently, was to seed clouds with hygroscopic salts laced with radioactive particles. The salts would cause rain droplets to form, delivering the radioactive material in "a deadly rain that can cripple or kill whole populations," according to a 1953 news article. Luckily for us, weaponized rain has yet to join the arsenals of the world's armies.

DeMent's fame seems to have faded, a bit like the flash from a nuclear bomb. At his death in 1992, the Oregonian ran a four line obituary which noted only day of death, surviving family, age, and the fact that "Due to the weather, no service was held, only family memorial."
Posted by Sara Piasecki at 2:10 PM No comments:

We are the proud new owners of several pieces of ophthalmological equipment, thanks to Janet Kreft, daughter of longtime Portland eye doctor Alfred J. Kreft.

Today's donation nicely complements the apparatus already included in the Medical Museum Collection, as well as those which form a part of the massive Kenneth Carl Swan Papers. 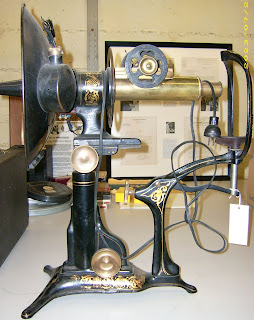 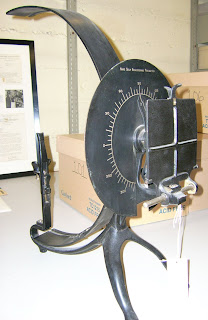 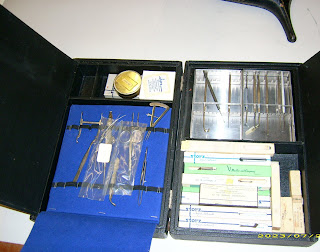 Posted by Sara Piasecki at 12:39 PM No comments:

In November of 1972, the Oregon Medical Association released a Physician's Study: Oregon, 1950-1972. Compiled by Harold T. Osterud, Hugh Tilson, Keith Griffin, and Robert Dernedde, the document is the "preliminary report" of the "Office of Practice Survey of physician manpower," which was created circa 1970 to research the state's need for "personal preventive medical services."

The report begins by challenging some of the very assumptions that undergirded the creation of the Office:

Premise I: It is highly artificial to attempt to separate preventive medicine from curative medicine.

(Old saws about ounces and pounds notwithstanding.)

(The true death knell for the "golden age" of medicine? Physicians removing themselves from the pedestal and rejecting apotheosis!)

Premise III: The prime prerequisite for preventive medical services is the availability of physicians to a community.

(Although this report was written in the pre-Internet age, I suspect this assertion is still valid. Sure, you can read about good nutrition online, check your fitness levels on gym machines, and monitor your own heart rate on those contraptions they have in the pharmacy areas of large grocery stores, but it's hard to get a virtual flu shot.)

Premise IV: The distinction between private and public medicine is not useful in achieving improved medicine in Oregon.

(We're all in this together, people.)

Premise V has no short, snappy title. It is a summary of doubts and uncertainties that question the very idea of the survey, including such truisms as "where there are physicians, it is by no means clear that they all practice good preventive medicine."

A report that lays its own shortcomings bare in such a fashion can only recommend itself as a fantastic, authoritative, and important document. Would that all reports were as introspective!
Posted by Sara Piasecki at 3:24 PM No comments:

Town v. Gown: no doubt about it

These days, older physicians and emeritus faculty from the medical school talk about town-gown tensions in abstractions, debating whether there really was any tension, how bad it was or how exaggerated. Through the lens of hindsight, it can be difficult to determine the extent of the problem or its nature. A report from the 1956 annual meeting of the Oregon State Medical Society, published in the June 1956 issue of Northwest Medicine, puts the issue to rest.

The Committee on the Study of the University of Oregon Medical School and Affiliated Institutions delivered its report, a scathing indictment of many activities, policies, and trends at the UOMS. In a section entitled "Decline of Good Relations," the committee spelled out the townies' beef against the Hill:

In recent years there has been a marked deterioration in the relations of our Medical School with the downtown physicians who have comprised the volunteer faculty. A number of volunteer teachers have resigned. Others have ceased to serve without submitting formal resignations.
There are several causes for the present bad relations including:
1. Lack of appreciation or recognition of the contributions of volunteers who have given long years of service to build up the Medical School.
2. Complete ignoring of the volunteers by some full-time department and division heads in the planning of teaching programs.
3. The elimination of or change in the teaching assignments of volunteers without consultation with them.
4. The primary interest of some full-time heads and faculty members in utilizing the prestige of their Medical School positions to develop lucrative private practices rather than to carry out their teaching and research functions.
5. Cooperation of some full-time heads who engage in private practice in blatant newspaper publicity extolling their personal attainments and the special facilities available in their departments or divisions.

I leave it to the reader to judge whether or which of these charges was wholly the conscious fault of the Medical School and to what extent the changes outlined by the Committee may have been manifestations of larger medical, economic, or societal trends.

The report does also clear up one other puzzling item: the definition of "geographic full-time," a term often applied in the past to some medical faculty. The Committee finds that "the term, 'geographic full-time,' has been coined by medical educators to describe a faculty member who devotes only a portion of his time to teaching and research and is permitted to carry on a private practice using the medical school's office space and its diagnostic, treatment, and hospital facilities, as well as the personal services of the medical school's residents and other auxiliary personnel. The term 'geographic,' presumes the the faculty member is on the medical school campus during his entire work period and thus accessible to the students at all times, even though his full time is not spent in teaching and research."

So, now you know! I don't, however, recommend that you use this term on your boss the next time you're caught spending too much time at the water cooler.
Posted by Sara Piasecki at 8:24 AM No comments:

We were saddened and surprised to see in yesterday's Oregonian the announcement of the death of Richard P. Lewis, M.D. Dr. Lewis passed away unexpectedly on May 18, 2008.

A scholarship fund has been established in his name at OSU.
Posted by Sara Piasecki at 8:18 AM No comments: