Ripped from the headlines 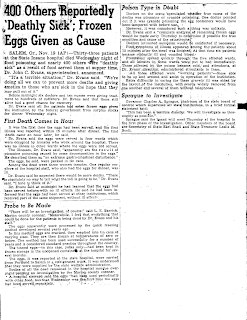 An old mystery landed on my desk yesterday, in a letter from a patron down the valley. In November of 1942, 47 patients at the Oregon State Hospital fell ill and died after eating eggs; another 400 were sickened. A news article dated Nov. 19 was included with the letter (and is included here). A quick check of the Oregonian index available from the University of Oregon sketches a gruesome tale, with headlines such as:
Two faculty members from the University of Oregon Medical School, Frank Menne and Joseph Beeman, were both involved in investigating the case, and although their biographical files do not contain any shocking insider information, Beeman did subsequently write an article on the poisoning for the Journal of the American Medical Association (121 (Mar. 13, 1943), 826-27).
Posted by Sara Piasecki at 12:51 PM No comments:

History of medicine: redressing the balance

Iago Galdston's preface to Bernhard J. Stern's book, American Medical Practice in the Perspectives of a Century criticizes the history of medicine as it had been written to date (1945):

The illumination and guidance to be gained from past experience are particularly needed in the definition and resolution of the many intricate problems in medical care which confront us today. To understand the nature and quality of these problems, to venture some reasonable patterns for their solution, it is essential that we know a good deal about their origin. And for this we must turn to history.

The history of medicine has been cultivated with especial skill and enthusiasm during the last one hundred years. As a result, the events and personalities of medicine are today better known to a greater number of persons than ever before. This is a gratifying achievement, but it is not entirely without untoward effects. For all sectionalism gives rise to a distortion in perspectives, and the history of medicine, which is but a section of the history of mankind, has too often been treated as a thing apart. With little or no account being taken of other contemporary historical events, the resultant picture of what happened in medicine is bound to be distorted and, in parts, unintelligible.

And so, we here in Historical Collections & Archives, along with others in different repositories around the country, try to collect not just the scientific output of physicians, nurses, dentists, and other healthcare professionals, but also materials pertaining to other areas of their lives, their correspondents and colleagues, the cultures in which they operated at a given moment in history. We hope that there will always be researchers as sensitive as Dr. Stern, who recognize the value of context.
Posted by Sara Piasecki at 8:55 AM No comments:

The last of our three oral history interviews for this week was successfully conducted this morning, as Matt Simek interviewed Dr. Peter A. Goodwin, M.D., for nearly three hours. Goodwin is emeritus professor of Family Medicine here at OHSU, and a vocal advocate for physician-assisted suicide.

Goodwin began with a fascinating discussion of his early years in Capetown, South Africa, his medical education at the University of Capetown Medical School, and his first private practice in Queenstown, South Africa. Freely admitting that he made errors, "both medical and social," Goodwin characterized that practice as "stressful, exciting, grotesque." He studied surgery abroad for two years, finally becoming a Fellow of the Royal College of Physicians of Edinburgh. Returning to use his skills in Queenstown, he was hampered by a lack of facilities for blood transfusions (the handful he performed there were direct vein-to-vein) and the complete absence of tools for cautery.

Goodwin fled the country with his wife and children in 1962, coming to the U.S. after witnessing the Sharpeville Massacre and the rise of the National Party. He joined a private practice in Camas, WA, and stayed there for several years before joining the OHSU Dept. of Family Medicine full time in 1980.

A passionate proponent of what he calls "physician-aided dying," Goodwin then went on to discuss his views at length, describing particular cases that influenced his views and led him to champion the terminally ill patient's right to control the time and place of death.

Wrapping up a long, intense, and occasionally emotional interview, Goodwin finished with--of all things--a joke. Certainly a first for the OHSU Oral History Program! Well told, I might add. But I don't think he'll be getting a gig at Spirit Mountain anytime soon...
Posted by Sara Piasecki at 3:30 PM No comments:

Oral histories: two in the can

Our able interviewer Jim Kronenberg, formerly director of the Oregon Medical Association, along with video producer Matt Simek of Pacific Standard Television, videographer Ralph Cunningham of Vista Video, and yours truly got two of our three planned oral histories on tape yesterday.

Dr. Rodney K. Beals, MD, spoke about changes in orthopedic surgical treatments, techniques, and materials before moving on to a discussion of the history of orthopedics in Oregon. The forty-first resident to complete the ortho residency at the University of Oregon Medical School, Beals knows every resident who came before him and every resident who has come after. Each year, he spends days calling orthopedists across the state to gauge manpower changes. He also happens to have a set of glass lantern slides originally owned by Richard Dillehunt, MD, third dean of the UOMS and one of the state's first orthopedists.

Dr. William Toffler, MD, discussed his own entry into the (then) new field of Family Medicine in the 1970s, his early years in private practice in Sweet Home, OR, and the development of the Family Medicine department at OHSU before moving on to an eloquent articulation of his stance against physician-assisted suicide, calling it a "dis-ease" against which he now hopes to "immunize" other states and other areas around the world.

This morning, we will hear the counterpoint to Dr. Toffler's stand from Peter Goodwin, MD, and explore how it so happens that the two most vocal advocates for and against physician-assisted suicide also happen to be colleagues in the OHSU Department of Family Medicine and, in fact, old, old friends.
Posted by Sara Piasecki at 7:35 AM No comments:

Out and about: Oral history interviews today and tomorrow

I'll be out of the office, off campus, and away from email and phones today as we capture two more oral history interviews, with a third scheduled for tomorrow morning. We are honored and pleased to take as our numbers 102, 103, and 104, the following OHSU faculty members:

It's no secret that Toffler and Goodwin are and have been vocal and public foes over the issue of physician-assisted suicide (Toffler anti, Goodwin pro), and it should come as no surprise that the interviews will probe that delicate issue. Stay tuned for details!

As a reminder, you can see a complete list of interviewees and access transcript indexes (plus search across all indexes) on our web site; once processed, all transcripts and tapes are listed in the catalog and made available for checkout through the OHSU Main Library.
Posted by Sara Piasecki at 7:00 AM No comments:

As I have mentioned, it is by some reckonings the 110th anniversary of the OHSU School of Dentistry this year. We know that, for example, there were around 150 medical schools in North America around the turn of the century, but what about dentistry? Was the North Pacific Dental College one of a vast hoard of institutions of dental learning in America when it was established in 1899?

Well, if we turn to The Genesis of Dental Education in the United States by Van Broadus Dalton (great name!), we learn that there were, in fact, only fifty-four dental colleges in America in 1899. While this may not seem like a lot, given the medical school numbers and realizing that everyone has teeth which probably need attention at least once in a lifetime, it was too many for some. In a Flexnerian rant at the 1899 meeting of the National Association of Dental Faculties, a Dr. Jonathan Taft of the University of Michigan Dental Department warned:

There are fifty-four dental colleges in the United States. It is certainly a question as to whether this number is demanded by the needs of the country. The question arises when we consider the number seeking to enter the ranks of the dental profession. The question is also emphasized when the small number in attendance at many of these institutions is taken into account. It is further impressed by the unfitness of many applicants to enter upon such a course of study and work. There is not a dental college in this country whose classes would not be improved by the elimination of unworthy students, and there are some institutions that have scarcely any well-equipped students.

Could this have been, perhaps, a case of "Dental professor, heal thyself!"? Or, a cry for an Eastern monopoly on dental education? While it is true that records show only two graduates from NPC in 1899, you gotta start somewhere, right? By 1901, the school had a graduating class of 10, and the next year the number jumped to 41. It seems doubtful that students would have committed time and money to certification in a profession that wasn't "in demand." By 1922, there were more than 700 students in dentistry and pharmacy enrolled at NPC.

Today, the American Dental Education Association lists... about fifty-four schools of dentistry in America. The more things change, the more they stay the same!
Posted by Sara Piasecki at 2:19 PM No comments: