An update on Dr. Camilla May Anderson Friendly, M.D., about whom we have written twice before in the past (here and here):

A very helpful reader from Sidney, MT (thanks Sandi!) sent us copies of Dr. Camilla M. Anderson's obituary from a local newspaper and the program from her funeral services. Thanks, third-hand, to the Fulkerson Funeral Home and the MonDak Heritage Center for helping Sandi get copies. 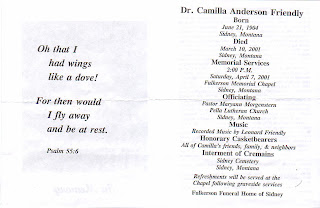 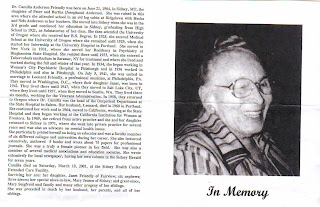 Posted by Sara Piasecki at 10:20 AM No comments:

This month marks the twentieth anniversary of the designation of OHSU as one of Oregon's two Level I trauma centers. (But what to get them? I don't think china would last long in a trauma shop.)

Since 1988, the Department of Surgery's Section of Trauma & Critical Care has treated nearly 2500 patients per year; research by the Rural Trauma Study Group–led by Dr. Richard Mullins and funded by the Centers for Disease Control and Prevention–have found that the odds of death for injured Oregonians have declined significantly, especially among brain-injured patients, over that time.

The announcement from the OHSU newsletter Outlook ran as follows:

More than 25 years ago, a landmark study showed trauma patients in the Portland area who had been taken to the nearest hospital had inappropriate outcomes based on the severity of their injuries. This proved a rallying cry to the Oregon legislature, which called for the institution of a statewide trauma system.

It was a simple enough idea: hospitals that treat the most trauma patients will have better outcomes. And those hospitals should have specialists, life saving equipment, and ancillary services immediately available to patients in need.

May marks the 20th anniversary of the Oregon trauma system. Oregon was one of the first states to develop a statewide trauma system, and is unique in its inclusion of smaller, rural hospitals as Level III and IV trauma centers. Today, Oregon’s system stands as a model for other states, and OHSU remains dedicated to serving as one of the state’s two Level I trauma centers.

OHSU cared for more than 17,000 trauma patients between 1995 and 2004; more than 4,000 of those patients were transferred from hospitals around the state. OHSU is the state’s medical resource hospital, answering about 3,000 calls annually from paramedics and EMT’s. Data from these calls are used for research to determine when changes in emergency medical response protocols are needed. The emergency communications center based at OHSU ensures Portland area patients are taken to a hospital that has space to care for them, and ensures no hospital is overwhelmed during incidents with more than 10 patients.

The day after the new trauma care system went into effect, The Oregonian touched on the controversy surrounding the designation of OHSU and Emanuel as the two centers:

Monday was the official date for Oregon Health Sciences University and Emanuel Hospital & Health Center to begin taking care of the most seriously injured accident victims in the Portland area.

In October, after intense competition among five Portland-area hospitals, the Oregon Health Division designated Emanuel and OHSU as trauma centers.

One question surrounding the selection has been whether the two hospitals could accommodate the area's flow of serious injuries.

The choice of OHSU and Emanuel was the result of a lengthy assessment conducted by nationally respected trauma experts. An article from the Sept. 20, 1987 Oregonian noted that:

Medical experts from across the country will begin arriving in Portland Sunday to help decide which Oregon hospitals will be designated at trauma centers -- places where the most seriously injured people in the state are treated.

On Monday a four-member team will begin examining five hospitals outside the Portland area. A week later, a five-member team is scheduled to survey five Portland-area hospitals competing for the lucrative trauma center designations.

Both teams will review hospital records, examine equipment, interview hospital workers and investigate medical records of patients who have been treated for trauma to help decide which of the institutions should receive what amounts to a state franchise to treat seriously injured people.

Nancy Clarke, manager of emergency medical services for the Oregon Health Division, said the Lester Wright, Oregon public health officer, is scheduled to decide by Oct. 12 which of the hospitals will be designated.

Three of the five Portland-area hospitals -- Emanuel Hospital & Health Center , Oregon Health Sciences University , and St. Vincent Hospital and Medical Center -- have asked to be named level one trauma centers. Such a designation requires that the hospitals do trauma research and operate educational programs in the treatment of serious injury.

Two other hospitals -- Providence Medical Center and Portland Adventist Hospital -- are contenders for a second-tier designation.

State health officials have not said how many of the Portland institutions would be named as trauma centers.

OHSU has proven itself to be a valuable and effective statewide resource for trauma patients. Happy Birthday to them!
Posted by Sara Piasecki at 12:03 PM No comments:

Yesterday, I had a good excuse (reference question) to spend some time going through 1930s-era issues of The Datter, the newsletter (and later annual) of the North Pacific College of Oregon, looking specifically at athletics--and more precisely, basketball. Who knew the dentists (and pharmacists) were such 'ballers?

In the age before extensive cable television coverage of every sports event, down to junior high and grade school leagues, sports highlights came a little slower. Take, for example, the March 1938 writeup of a game played on Feb. 15 of that year:

Clark Junior College of Vancouver, Wash., took the measure of the "molar grinders" on the Irvington court 39-26. Bill Fisher again emerged high point man, dropping in 14 points. The N.P.C. squad just couldn't seem to click against a much weaker opponent--although the Clark boys did display some excellent teamwork.

The Feb. 18 game apparently went a little better for the NPC team:

North Pacific College downed the highly favored Multnomah College quint on the Central Y.M.C.A. floor by a 40-38 score. It wasn't until the last minute that we finally forged ahead. The large crowd was on its feet throughout the last five minutes of play.

Rosenberg went wild, scoring 14 points, including 6 out of 9 free throws. This was one game where teamwork dominated. The Multnomah hoopsters were leading the Willamette Valley Conference at that time, making it quite a victory for N.P.C.

Stats are included for each player on each team for each game, giving the reader a complete picture of the event.

It wasn't all fun and basketball games, though, as The Datter itself shows. The first two pieces in that March 1938 issue are O.T. Dean's "Intra-septal alveolotomy", and "Facial neuralgias in relation to dentistry" by our favorite bad-boy neurosurgeon, A.J. McLean.
Posted by Sara Piasecki at 2:12 PM No comments: 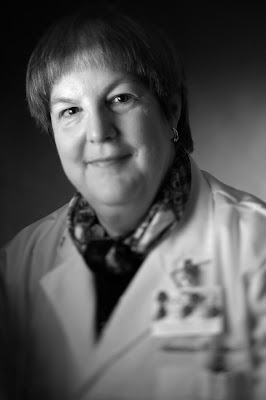 In the ever faster run-up to the local opening of the NLM traveling exhbition, Changing the Face of Medicine: Celebrating America's Women Physicians, we pause to recognize our own Joanna Cain, M.D., who has just been elevated to Local Legends status on the national web site.

A bit more information about Cain is available on the OHSU web site, here and here.

Stay tuned, as we do expect one more Oregon woman physician to be nominated before the opening reception on June 18.
Posted by Sara Piasecki at 1:49 PM No comments: 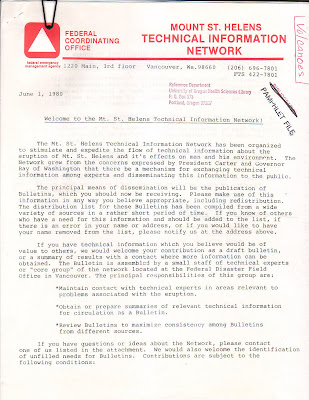 Yesterday marked the 18th anniversary of the last major eruption of Mt. St. Helens, an event that then-President Jimmy Carter called the worst natural disaster of the century in the United States.

Recognizing the health implications of the event for patrons throughout northwestern Oregon and southwestern Washington, the reference staff of the then-University of Oregon Health Sciences Library immediately began collecting information. Starting on June 1, 1980, the Federal Coordinating Office of FEMA began issuing bulletins from the Mount St. Helens Technical Information Network. UOHSC Library staff obtained all of the bulletins--33 in total--along with newspaper stories, research articles from medical journals, and other ephemera. 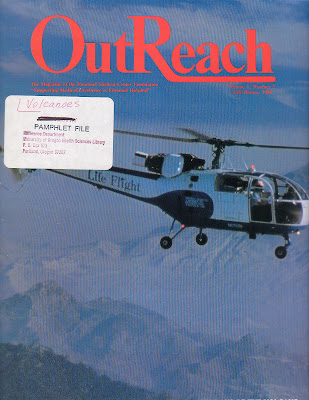 One of the glossier pieces in this collection was provided by the Emanuel Medical Center Foundation. The foundation's magazine, OutReach, came out in a special double issue, Days of the Volcano, in the fall of 1980. As the issue preface notes: "[The eruption] also focused a great deal of attention on Emanuel Hospital where some of the volcano victims were brought for treatment. This issue of OutReach is devoted to telling the story of those patients, the people who cared for them, and the people who were responsible for keeping the state's largest medical center operational during ash fallout, a visit by the President to view the volcano's aftermath, and the frantic search of relatives looking for family members lost when the mountain erupted."
Posted by Sara Piasecki at 7:46 AM No comments: