The end of (another) era, or, Elegy on a Friday

Well, if we hadn't chatted up the plumber and the carpenter yesterday, the movement of furniture by facilities guys this afternoon would have alerted us to the sad truth: the Old Library Great Hall is scheduled for renovation. And not of the historic preservation kind.

Sure, it may not look like much these days... 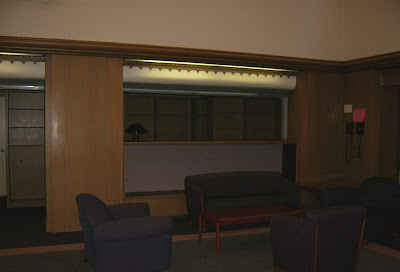 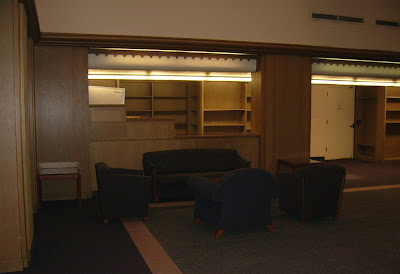 ...but the old circ desk was elegant, functional, and heavily used. In our dreams of manifest destiny, we saw Historical Collections & Archives reclaiming and repurposing this space for exhibits, perhaps, or just additional shelving. Now, it is slated for two storage areas, one equipped with freezers (whether of the party kind or the pathological kind remains to be seen).

An additional change will see the closet adjacent to the old Indexes & Abstracts Room turned into an ADA-compliant restroom (which begs the question of access to the second floor generally, since it is only accessible via two staircases, or the elevator in the closed-access stacks area).

For a few fast facts about the Old Library, check out one of my old posts. And now, a look back on the building's heyday: 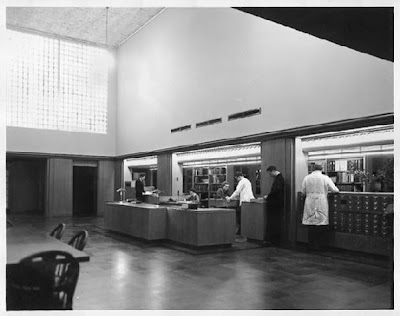 When is a crackle a rale? (or vice versa)

One of our medical students came to the History of Medicine Room today, having been challenged by her preceptor to find out when "rales" started being called "crackles." Of course, tracing any shift in terminology requires old dictionaries, and luckily we have a few here close to hand. A quick glance at Gould's 1896 Illustrated dictionary of medicine, biology, and allied sciences shows that, rather than being a synonym for rale, crackle is actually a more precise term, being the sound "heard over a lung in which softening of the tuberculosis deposits has begun to take place."

Gould actually devotes slightly more than one full page to a chart of the various types of rales, from amphoric to sub-crepitant, 23 in all. Four of those are types of crackles, including small, medium, large, and dry crackling, all found in tubercular patients (the dry crackling also manifesting itself in patients with pulmonary gangrene).

What does this tell us about the state of the physical examination today? The 29th edition of Dorland's (the most modern dictionary in the office here) and the NLM list of Medical Subject Headings both equate crackles with rales, and apparently some clinicians think the former term has simply replaced the latter in common usage.

This semantic blurring of the varieties of respiratory sounds is a symptom of the degradation of the physical examination in modern medical practice, where chest x-rays and blood tests have become substitutes for auscultation and percussion, elevating the "science" of technology over the "art" of human experience--and costing us all a lot more in lab fees as a consequence.

But I'm pretty sure we're better off, in general. There were, undoubtedly, some legendary diagnosticians here at OHSU--and at other institutions, I imagine--who could not only distinguish a moist rale from an amphoric rale, but could tell you the precise functional residual capacity of the patient's lungs while they were at it. But what about the average doc, who was maybe a little hard of hearing, or suffering from a head cold? As much as we all might appreciate the art of the physical exam, there really is something to be said for calibrated measurement devices.
Posted by Sara Piasecki at 12:01 PM No comments:

Our ongoing assessment of every single volume located in the OHSU Library's offsite storage facility continues, unearthing uncataloged titles, misshelved volumes, and many MANY items in need of a little tender loving care.

One such item, with badly cracked hinges and a cumbersome staple-n-glue binding, came to my attention today: Collected papers on eugenic sterilization in California, published by the Human Betterment Foundation in 1930. Noticing that our catalog record for the title lacked any information about the individual pieces contained in the collection, I decided to quickly enhance the record to allow better retrieval of the book by those researching eugenic sterilization.

It didn't take long to confirm that the vast majority of the collected papers were, unsurprisingly, written by members of the Foundation's board: Paul Popenoe, Otis Castle, Justin Miller. Two essays are by Joseph Mayer, the German eugenicist and Roman Catholic theologian. Somewhat unexpected (at least by me) was the inclusion of a piece by Robert Latou Dickinson, the obstetrician/gynecologist, who wrote extensively on human sexuality. To his credit, Dickinson's essay addresses the challenge of "sterilization without unsexing," but he does nevertheless seem to support wholeheartedly the forced sterilization of certain populations.

In his introduction to the collection, E.S. Gosney sums up the Foundation's position:

If the student draws the same conclusions that we have drawn, he will recognize that eugenic sterilization is no cure-all; that it is not a short-cut to any eugenic millennium; that it is not a measure which supplants or renders unnecessary any of the present machinery for dealing with social problems. He will, however, recognize it as an invaluable and necessary supplement to all these recognized protective measures ...

One wonders here how many demonstrable "cons" would have been required to outweigh the "pros" of eugenics for members of the Foundation, given the easy admissions made here.

For the curious among you, here is the complete list of essays contained in the collection:

The future of medical education, as seen in 1961: town v. gown

As I have previously mentioned, the archives recently received a collection of papers belonging to the pioneering Oregon neurologist Robert S. Dow, M.D., back in February of this year. Part of that collection is a series of bound volumes containing (apparently) all of the papers and presentations delivered by Dow during his career, from 1938 through the 1990s. It's a fascinating compilation of documents outlining the course of Dow's research efforts, as well as his interests in the broader field of medicine.

In 1961, Dow gave an invited talk on Medical education in the United States: past, present, and future, to the Sellwood Moreland Lions Club here in Portland. After a disparaging glance back at the spotty early years of American medical education, he moved on to a consideration of the challenges facing American medical schools. Even then, in 1961, Dow saw an impending physician manpower crisis, a need for schools to produce more physicians to care for an ever-growing, ever-aging, ever-prospering population. He noted that a nationwide increase in medical schools, from 76 in 1931 to 85 in 1959, was helping address the problem, but wondered "What further can be done locally in this respect, short of increasing federal and state taxes to enlarge the tax-supported institutions now primarily responsible for the training of physicians?" (I wonder what he would have thought, had he lived to see the steady and precipitous decrease in state financial support of the medical school at OHSU. I don't think he would have been at all surprised.)

His suggestion: "One action would be to strengthen and utilize to a greater degree private non-tax supported hospital facilities in certain centers. Some of our private hospitals in Portland are already rising to meet the demand for more educational opportunities for post-graduate medical education. I am proud of the progress that my hospital has made in the last few years and I speak now of Good Samaritan Hospital."

He continued: "I think these non-tax supported, privately endowed institutions should be encouraged by all who can do so to broaden their activities in this field. A great deal of teaching and research talent can be gleaned from the private physicians in this community who formerly donated many hours to the medical school and whose services are used less and less as the school continues to expand its 'full-time' salaried faculty."

This mid-century perspective on the town-gown tensions within the Portland medical community, from the viewpoint of "the town," serves as a nice compliment to the implicit assumption in many contemporary university documents that the educational establishment must be confined to sanctioned classrooms and/or clinical settings. Indeed, the ideal educational environment is most likely situated somewhere right between wholly private and wholly university-based settings, and many OHSU postgraduate programs seek to find the best of both worlds by mandating rotations through a variety of local healthcare settings, as well as the university hospitals and clinics.
Posted by Sara Piasecki at 10:16 AM No comments:

A Trio of Web sites

What better on a Monday morning in May than a trio of web links for a little edification and entertainment?

Many thanks to John Lienhard for bringing his web site, Engines of Our Ingenuity, to my attention last week. Though Lienhard's main interest is in the history of engineering, there are stories aplenty for medical historians, including vignettes on the Broad Street pump, the Black Death, and blood banking, among others.

Only a few days remain in the Wellcome Collection's very interesting exhibition Life Before Death, with photos by Walter Schels and text by journalist Beata Lakotta.

And keep your eye on the development of the online Bassett Collection from the Stanford University School of Medicine. The images, originally created by anatomist David Bassett and View-Master photographer William Gruber, became instant classics when they were published between the 1940s and 1960s, with physicians reportedly lining up to hear the men speak at conferences. While the full collection will, apparently, be available by subscription only, the sample images alone are worth a look.
Posted by Sara Piasecki at 7:13 AM No comments: