Pulling some materials for a small display I will be setting up next week at an outreach event, I came across (again) the little card promoting Esther Pohl Lovejoy's 1920 congressional bid. Since the media seems completely preoccupied with Vote 2008, it seems only fitting that we join in with a glance back at campaigns of yesteryear. 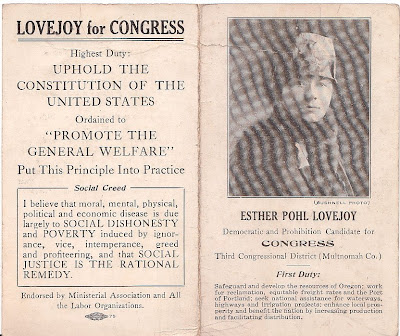 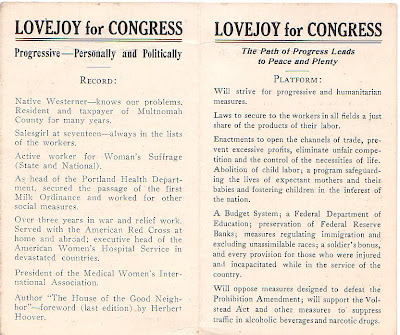 Lovejoy was unsuccessful in her bid, but went on to do great things nevertheless. Indeed, one wonders whether the experience of holding a political office would have dampened her boundless optimism about the power of individuals to change the world.
Posted by Sara Piasecki at 10:49 AM No comments:

Starting to plan your summer trip to Portland? Coming for the Rose Festival? Why not stay a little longer and catch one of the events planned in association with the exhibit, Changing the Face of Medicine: Celebrating America's Women Physicians:

Keynote Lecture: A Brief History of Women in Medicine
Sat., June 21, 7-8 p.m.
Oregon Health Science University Auditorium
The mark of the woman physician through history has been one of hardship, distinction and accomplishment. Sima Desai, Associate Professor of Medicine in the Division of Hospital Medicine at Oregon Health Sciences University, highlights the challenges and successes of both the women and the institutions which made a difference for and in medicine. While historically women once held important positions in medicine where their wisdom and healing were widely sought, they were driven out of the profession in the 17th and 18th centuries when societal norms changed. Hear how they rose to prominence in the late 1800s in preventative medicine, and the larger inroads made by women in the profession in the 19th century.

Esther Clayson Pohl Lovejoy, M.D.: Changing the Face of Medicine in Oregon and Across the World
Tuesday, July 22, 6:30-8 p.m.
U.S. Bank Room, Central Library
801 S.W. 10th Ave.
Learn about Esther Clayson Pohl Lovejoy, M.D., an 1894 graduate from the University of Oregon Medical School and a key figure in progressive era Oregon public health and suffrage campaigns. Kimberly Jensen, professor of history at Western Oregon University and author of Mobilizing Minerva: American Women in the First World War, traces Lovejoy’s accomplishments from her medical service in the First World War to directing and expanding the American Women’s Hospitals, an international medical relief service for civilians and refugees. As organizer and first president of the Medical Women’s International Association, Lovejoy developed an international vision for cooperation among medical women which continued throughout her life.

New history resources from the National Library of Medicine

Passing along the announcement of two new online resources for the history of medicine from Michael North, Head of Rare Books & Early Manuscripts in the National Library of Medicine's History of Medicine Division. Both are very interesting, and worth checking out:

The History of Medicine Division of the NLM is excited to announce two
new websites focusing on the Bathtub collection and genealogical resources.

The Bathtub collection consists of fragments found in the old and rare
bindings of the NLM’s rare book collection when items were rebound and
conserved in the 1940s and 1950s. It is called the “Bathtub Collection”
because then-curator Dorothy Schullian took the leftovers of
conservation work home and soaked them in her bathtub to retrieve the
often interesting bits and pieces of medieval manuscripts and early
printed ephemera she found. Please visit the site at:
http://www.nlm.nih.gov/exhibition/bathtub/

NLM is also home to numerous genealogical resources for those seeking
information about ancestors with medical or health related training.
Among these is the AMA Deceased Physicians Card File, a collection of
nearly 400,000 index cards created by the AMA between about 1901 and
1969 focusing on everyone in the U.S. who received a medical degree.
The cards were updated throughout the physician’s career with
information about degrees obtained, licensing, addresses and finally
cause of death and sometimes obituary citations and even portraits.
Please visit the site at: http://www.nlm.nih.gov/exhibition/genealogy/

OHSU patrons please note that the university's copy of the printed Directory of deceased American physicians, 1804-1929 is available in the reference section in the Main Library.
Posted by Sara Piasecki at 12:11 PM No comments:

Thanks to researcher Morgen Smith, from the Department of Culture and History at the Chilkoot Indian Association in Haines, AK, we have more information to pass along on where to locate information about the Morningside Hospital and its patients. Morgen wrote:

According to The History and Folklore of the David Douglas Community (David Douglas Historical Society, 1989), the private hospital “was devoted exclusively to Alaskan patients” from 1904 to 1962 (pg. 22). Patients included not only the mentally ill, but also those with Alzheimer’s, Down’s Syndrome, tuberculosis, syphilis, cerebral palsy, and a variety of other conditions for which there was no government care available in the territory. It was a privately owned hospital that was contracted to provide these services. The Alaska State Archives has a few resources related to Morningside Hospital, but not complete records. Items they do have were from the territorial governors’ records. These included some admittances and patient records, as well as several folders of form notification letters that were sent to families to notify them when a patient died or was discharged. While the medical records are confidential and sealed, there are some interesting pictures of the hospital buildings and grounds, including the farm, root cellars, etc., available for pubic viewing at the archives.

Credit really goes to the people who sent everything my way! I’ve attached the pages from the David Douglas book, sent to me by Joanna Klick, president of the David Douglas Historical Society in Portland. Staff of the Alaska State Archives (http://www.archives.state.ak.us/) were responsible for letting me know about what they have in their collections, as well as finding the public-access photos. (Incidentally, some of the photos have really great resolution—not sure how they were able to accomplish that in 1931!)

It would be great to be able to add further details to your blog, since information on Morningside is pretty scarce.

The text in the PDF can be obtained from the David Douglas Historical Society (I don't want to share this online without their permission!)

Thanks to everyone who has been able to contribute some information--let's keep it coming!
Posted by Sara Piasecki at 12:34 PM No comments:

Last Thursday, the Cardiology Grand Rounds talk was delivered by Dr. Albert Starr, M.D., co-developer of the Starr-Edwards heart valve. The presentation was entitled "Mitral Valve Surgery 50-year Anniversary Address," in a nod to the start of Starr's research on heart valve replacement surgery at the University of Oregon Medical School back in 1958.

Starr shared his personal reminiscences of his work with engineer and inventor Lowell Edwards (who once developed an automobile signalling mechanism using an inflatable rubber obstetrical glove) and his experiences as a researcher at UOMS in the 1950s. He noted that there was a definite "frontier mentality" at the school ("Dogs would be delivered to the lab at midnight from undisclosed locations") that facilitated the development of groundbreaking new devices and techniques.

Oregon was not the only frontier in those days: medical research itself was a rapidly expanding area that lacked many of the oversight mechanisms we now take for granted. Starr reminded the audience that in 1958, when the team began to consider human trials, there was no FDA, no informed consent, no surgical techniques for valve replacement, no surgical ICUs, no applicable ethical guidelines, no company to produce the devices, no name for the artificial valves themselves, and no clear data yet on which of Edwards' designs was more effective: simple ball-and-cage or the more complicated shielded design.

Indeed, the lack of standards and guidelines made the research appear too risky to many. At a meeting in 1960, Michael DeBakey, M.D., declared that, had the research proposal come to him at the NIH, he never would have funded it. Lucky for Starr and Edwards that the Oregon Heart Association was at that time ably led by Mr. Howard Stroud, who ensured that there was funding enough to proceed.

And Starr was committed to excellence and patient safety. Early on, when it looked like post-operative staph infections might be a "show-stopper" for additional human trials, Starr implemented a rigorous screening process for all OR staff, taking nasal cultures of all surgical personnel and using antibiotics prophylactically on patients.

Starr finished his talk with a look ahead to the future of heart valve replacement and repair, and noted that the marketplace for percutaneous valve repair alone will soon amount to $1.2 billion. With numbers like those, there certainly seems to be no shortage of money for continued research.

The fifty years of mitral valve surgery presented in the lecture was nicely mirrored in Starr's career at OHSU: at the end of the talk, Division Chair Sanjiv Kaul, M.D., presented Starr with a pin and pen honoring his 50 year tenure on the university's faculty.

The lecture was videotaped, and the Oregon Chapter of the American College of Cardiology will be creating copies of the tape for viewing. Check with the OHSU Division of Cardiovascular Medicine for availability.
Posted by Sara Piasecki at 8:46 AM 2 comments: