Did you know the AMA had a beauty plan? And that you could get it for the low, low price of two dollars? Well, you could--back in 1970. 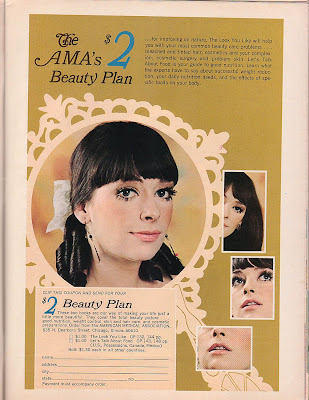 Today's flashback provided by the August 1970 issue of the magazine Today's Health.
Posted by Sara Piasecki at 2:29 PM No comments:

Among the wealth of materials in the J. Richard Raines Collection received last week (and discussed yesterday) is a small envelope of materials labeled "Dr. Alan Hart." I must confess that my heart skipped a little when I saw that notation; we have talked about Alan/Lucille Hart in the past and discussed the paucity of information in our own archives pertaining to his career.

While the amount of information included about Hart in the Raines Collection is small, it is significant. Collected, apparently, by Woolley and Raines in the course of their research into the history of radiology in Oregon, the materials shed light on Hart's standing in the medical community. An envelope tucked into a copy of Hart's book These mysterious rays, a non-technical discussion of the uses of X rays and radium, chiefly in medicine indicates that Woolley and Raines suspected Hart was the first Oregon physician to be educated as a radiologist. In fact, Hart had received an advanced degree in radiology at the University of Pennsylvania in 1930, writing a thesis on radiologic exams of the post-pneumotic lung. However, despite this evidence, Woolley opted not to include any mention of Hart in his history of radiology in Oregon.

Also included in the packet of information in the Raines Collection are two pieces of correspondence, one a typescript letter from S.W. Donaldson to Woolley, thanking him for sending a signed copy of his history. Donaldson writes: "Years ago I heard of a very particular old lady who would not put a book by a male author along side a book by a women [sic]. For that reason I will put your book on one end of the shelf and on the other end my books by Alan Hart ..." The other piece of correspondence is a short handwritten memo from Woolley to Raines, possibly referring to Hart's aforementioned Mysterious Rays: 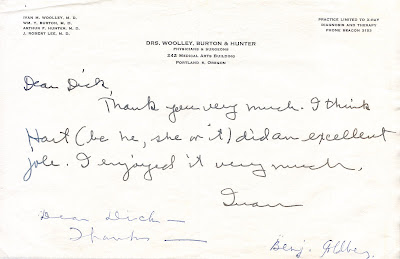 Another fascinating piece of paper is a memo from Forest Amsden of the Medical Research Foundation to members of the MRF executive committee, detailing the recent donation of $125,000 to the Foundation from the estate of Edna Ruddick Hart in 1982. Amsden writes:

Mrs. Hart bequeathed MRF the residue of her estate "in loving memory of my late husband, Alan L. Hart, M.D., a graduate of the University of Oregon Medical School, whose mother died of leukemia, whose life was devoted to medicine and whose earnest wish was to someday give financial support to medical research in its efforts to conquer leukemia and other diseases."

The estate gift was legally restricted to leukemia research, and so Amsden recommended that the MRF create an endowment fund, income generated by which would be used to fund grant applications "in the field of leukemia and related blood disorders." While there may not be a direct causal link, it certainly is interesting to note that Dr. Brian Druker came to OHSU in 1993 and subsequently worked to develop Gleevec, now widely touted as a cure for leukemia.

New resource for the history of radiology in Oregon

Last Friday, we received from the Honorable Keith Raines a collection of papers and artifacts belong to his late father, radiologist J. Richard Raines, MD.

Dr. Raines was born in Oklahoma in 1911, and received his medical training at the University of Oklahoma School of Medicine. After service in World War II, he relocated to Portland in 1948 and established a private practice here in town. The collection includes correspondence, certificates and awards, reprints, photographs, and information on Raines' involvement with the Oregon Medical Association and its legislative activities. Among the artifacts included in the collection is the first roentgen ray tube used in the state of Oregon.

The collection also includes a box of materials belonging to Ivan Woolley, MD, Portland radiologist, University of Oregon Medical School graduate (1916), and author of the book Roentgenology in Oregon: the first fifty years (1955). Correspondence pertaining to Woolley's historical research, as well as a manuscript copy of the book, is now available and will compliment the materials in the collection donated by Woolley himself before his death (Accession 2002-004).

Those interested in the history of radiology in Oregon will also be interested to know that Kenneth Stevens, MD, emeritus chair of radiology at OHSU, is developing a talk on the history of radiation oncology in Oregon for a January talk in the History of Medicine Society Lecture Series. Keep an eye on the lectures web site for more details as they become available,.
Posted by Sara Piasecki at 10:19 AM No comments: 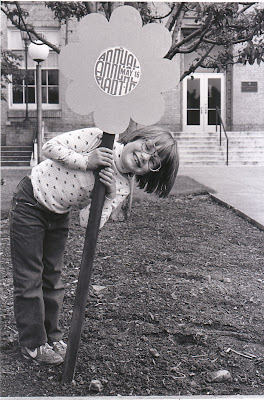 In the spirit of the day, we take a brief look back at the OHSU Annual Annual Plant-In, which ran for at least seven years (1979-1986) during the tenure of President Leonard Laster. The fearless leader himself got down and dirty in the effort to beautify the campus: 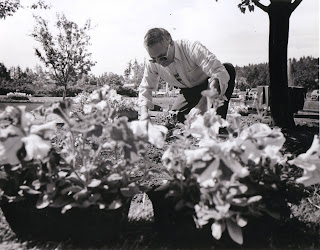 Get out there and plant something!
Posted by Sara Piasecki at 7:20 AM No comments:

A quick announcement that the nomination of Mae Cardwell, M.D., to Local Legends status has been successfully completed: you can now view Cardwell's biography and photo online at the National Library of Medicine Local Legends web site.

Stay tuned for the appearance of more Oregon legends in the near future!
Posted by Sara Piasecki at 7:01 AM No comments: