Thanks to an alert reader (codename: ULE), we have tentatively identified the Boris Yeltsin look-alike as OHSU Professor of Anatomy William A. Stotler, Ph.D., seen here in a 1984 School of Medicine yearbook photo: 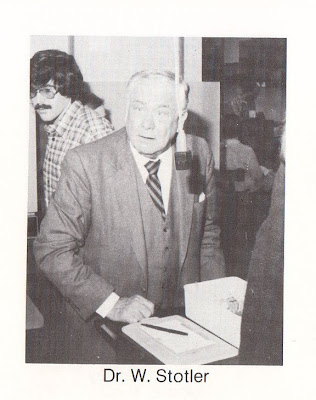 A tradition of philanthropy for teaching, healing, and research

In 1930, the University of Oregon Medical School received $400,000 from the Rockefeller Foundation to build and equip a new facility on the Marquam Hill campus, an Outpatient Clinic that would continue the work of the highly successful Portland Free Dispensary.  (For more information on the history of that institution and its integration in to the University of Oregon Medical School in 1909, see the online exhibit.)
A news article in the local paper quoted then Dean Richard B. Dillehunt:

'This is the largest gift ever made to the university.[...] The Rockefellers already have given $291,000 to the medical school. Gifts from all sources in the last ten years total $1,225,000. This sum equals the entire amount appropriated by the state for the same period. Thus the school has matched dollar for dollar, from private sources, every cent expended upon it by the taxpayers of Oregon.' [...]
"Latest recognition by the Rockefeller Foundation of the efforts in Portland and in Oregon to develop, as part of the state university, an institution of medical education, research and service to the people, does much to enhance these three functions of the medical school in its program of prolongation of life and the relief of suffering,' concluded Dr. Dillehunt.
'It makes another point in the progress of Portland as the medical center of the Pacific Northwest, and it is hoped that such generous consideration by an outside organization will stimulate interest in the state university, and encourage our own citizens to further endowments and benefactions to facilitate its work at Eugene, Portland, and throughout the state.'

And such is the university's hope today, as state appropriations to higher education dwindle and the costs of educating the health care workers of tomorrow and of providing health care to Oregonians continues to rise.
Posted by Sara Piasecki at 3:35 PM No comments:

The beauty of open stacks library facilities lies in the browsability of the collections: there is much to be said for the serendipitous discovery of books one might never have come across otherwise, whether by searching in electronic databases or by reference from scholarly footnotes.

And so I found Urling C. Coe's Frontier doctor, originally published in 1939. The foreword is by William Duncan Cheney: "There's a Doctor at Farewell Bend"--

...'But that's a hundred miles; it's below zero; and besides, I don't know how we can ever pay him.'
'The young Doc doesn't think about such things,' is the reply, and five minutes later the clatter of a running saddle-horse dies away northward.

The physician is president of a bank; and it is imperative that I see him immediately. All this particular day, save for lunch and dinner, I have waited in his office above the bank; and it is now two o'clock in a still winter night. I hear the trotting of a team of driving-ponies, the creaking of the ice beneath the buggy-wheels, and after a few minutes of silence, slow steps on the stair and along the hall. The door opens, and the doctor enters, clad in a heavy fur coat. He nods to me, but does not speak; and instinctively, neither do I. He goes to his desk, set his bag upon it, lays beside it a blue Colt six-shooter and a flask, opens a wall-cabinet, remembers his overcoat, removes it, serves me and himself with a glass of whiskey from the cabinet, wearily drops into a chair, and fifteen minutes later we are in the midst of our mutual business when we hear the clatter of a running saddle-horse, hurried steps upon the stair, a rap at the door, and the doctor says,
'Come in.'
A man enters, closing the door with a bang by standing with his back against it, as if he were unable to stand without support. Wiping the ice from his eyebrows and unshaven face with his coat-sleeve, he peers uncertainly, first at the doctor, then at me. Physically the physician is the most powerful man I have ever known; and now, tired, dishevelled, and dirty with the stains of travel, he might have been the town blacksmith. So the visitor selected the sedentary metropolitan as the person to address, saying to me,
'My wife is dying.'
The blacksmith rises, serves another glass of whiskey, and asks,
'Where is she?'
'About a hundred miles south.'
The doctor dons his fur coat, fills the flask, placing it in his left pocket, the Colt in his right pocket, picks up his bag, says to me, 'Handle that matter as you think right--I'll approve it,' and is gone.

My acquaintance with the author of this book began where the story ends, in 1911; and this is a truthful description of our first private interview. He was still going, you see, wherever people in distress were saying, 'There's a doctor at Farewell Bend.'

The foreword is followed by chapters called:
The book describes Coe's thirteen-year residency in frontier Oregon, detailing his experiences in delivering babies, fighting a typhoid epidemic, setting fractures, and dispensing advice on unwanted pregnancies and the like. It includes accounts of his patients--cowboys, rustlers, ranch wives, Indians, prostitutes, homesteaders, and town boosters--offering a social history of town and ranch life on the Oregon high desert. Along the way, Coe documents the development of a Western boomtown: with the arrival of the railroad in 1911, the wide-open settlement known as Farewell Bend (later shortened to just Bend) was transformed into an important center of industry, commerce, and culture.
Posted by Sara Piasecki at 8:17 AM No comments:

It has come to my attention that there were some unfortunate errors introduced into my April Scribe article during the typesetting process; notably, two dates were changed, making the text quite inaccurate (and almost incomprehensible). So, in the interest of clarity, the correct version is included herein:

When the Portland City Medical Society first convened in 1884, the group brought itself to order and quickly passed its By-Laws, including one notable clause: to ban women, in perpetuity.

Eternity has, perhaps, never seemed so short: in 1892, Dr. Mae Harrington Whitney was elected as the society’s first female member, throwing open the doors to generations of women physicians. In the July 1905 issue of the Medical Sentinel, the editors were moved to comment that “at the time of the organization [of the Society] women were not admitted as members. Today women are among its most honored guests. Truly, ‘the world do move.’”

Member of the Oregon State Medical Society since 1885, Whitney was an active member of the medical community of the city. From 1893-1903, she served as treasurer of the OSMS and was vice president of its House of Delegates in 1904; in 1894, she was the Oregon delegate to the American Medical Association convention in San Francisco. As contributing editor of the Medical Sentinel, Whitney regularly highlighted information from OSMS meetings, including addresses and scientific papers, and reported on the activities of medical groups outside of the state. She herself routinely presented papers at meetings of the OSMS, such as “Technology of Antiseptic Surgery,” and published in state and national journals, including the provocatively titled “Women as risks,” published in the Medical Examiner and Practitioner (1905: xv, 534-537).

Born in Pennsylvania in 1853, Whitney came to the West Coast in 1877, and graduated from Cooper Medical College five years later. She took a second M.D. from the Willamette University Medical Department in 1885, and received additional training in New York from 1888-1889. Returning to Portland in 1889, she joined the medical staff of the Portland Hospital in Sunnyside and, with Dr. Reese Holmes, began a training school for nurses there. In April of 1895, Whitney married Dr. J.R. Cardwell, Portland’s first resident dentist and himself an active member of the city’s dental community.

Her experience in the male-dominated medical societies of the city led Whitney Cardwell to become a founding member and first president of the Medical Club of Portland, a society created exclusively for women physicians in 1900. She held various positions within the club, and served as president a second time, in 1925.

In 1903, Mayor George Williams appointed Whitney Cardwell to the city’s Board of Health, making her the first woman to hold such a position. She served until 1905, when Mayor Harry Lane appointed a new board, including another prominent woman physician, Dr. Esther Pohl Lovejoy.

A constant advocate for women’s rights, Whitney Cardwell was also a charter member of the Portland Women’s Club, hygiene liaison to the Oregon Congress of Mothers, staff member of the Florence Crittenton Home and the Boys’ and Girls’ Aid Society, and one of the first members of the Oregon Child Welfare Commission. In addition, she was active in the suffrage movement in the state, and served as one of five vice presidents of the College Equal Suffrage Association’s Portland Chapter in the 1912 suffrage campaign.

During World War I, Whitney Cardwell and three colleagues –Drs. Katherine Manion, Mary MacLachan, and Emily Balcom—challenged the United States Army’s denial of officer status for medical women. Presenting themselves for duty at the Vancouver Barracks, the women were ultimately denied officer status by the Surgeon General, but the action was a powerful test case and an important component in the broader movement for full participation of women physicians in the armed forces.

Whitney Cardwell retired from practice in 1926 and left Portland to return to her Eastern roots. When she died in 1929 in Pennsylvania, the Portland Oregonian hailed her as “an outstanding member of her profession and a pioneer in women’s activities in the world of medicine.” Her efforts to advance the status of women in both the medical profession and society at large left an indelible imprint on Portland society and secured her place among the most prominent figures in the city’s medical history.
Posted by Sara Piasecki at 12:27 PM No comments: