I'm very excited that tomorrow I will be attending the day-long workshop "Streaming Audio and SMIL for Oral Histories," sponsored by OCLC and presented by Trevor Bond. Billed as a "nontechnical" overview of the technology required for digital capture and presentation of oral histories, I expect to gain just enough knowledge to make me dangerous. So, the OHSU Library Web Manager will be accompanying me, to clamp down on outrageously ambitious project requests in the future.

Presently, we have a list of all oral histories collected as part of the OHSU Oral History Program; PDF and HTML versions of the indexes for each processed interview; and an Oral History Master Index (which we refer to as the OHM Index) which allows searching across the individual indexes. The catalog records for each of the processed interviews link back to the individual index, providing a bit of a crosswalk back to our site and more information about the Program (example).

When the Program began back in 1997, the developers had the great foresight to create permissions release forms that do permit the online (re)publication of both audio and video portions of the interviews. While we have, to date, lacked the resources to fully exploit the opportunities provided by web for presenting oral histories, we continue to watch developments in online oral history collections--including those at Trevor Bond's home institution, Washington State University.

We hope to begin to present some of the wealth of material collected in our Oral History Program on the web soon--so stay tuned!
Posted by Sara Piasecki at 12:03 PM No comments:

Why we love ephemera

I was starting to lose my enthusiasm for sorting through all the pieces of paper contained in the recent donation of three boxes of ephemeral materials from University News & Publications, until I ran across this, which brought the smile back to my face: 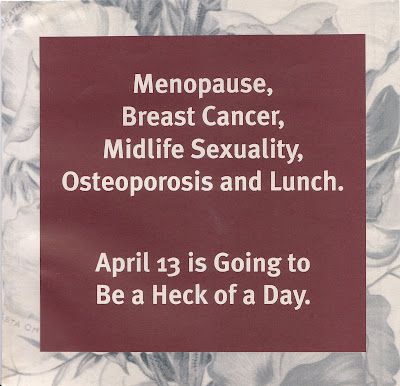 It's a trifold advertisement for the inaugural OHSU Women's Health Conference, held on April 13, 1996. Over the past eleven years, the conference has grown considerably, and this year's event is sure to be well attended.
Posted by Sara Piasecki at 3:09 PM No comments:

Have I mentioned that we had three boxes--large boxes, mind you--literally dropped on our doorstep on Friday while we were away? Did I mention that these large boxes were primarily filled with ephemera--single sheet pamphlets, posters, brochures, wallet cards, and the like--that had been dumped out of other receptacles? I'm not complaining: it's great stuff. But, it is taking some sorting.

In the process of sorting and starting to file some of these into the Subject Files, I came across this old Subject File folder (first folder, first box, which I've never noticed before, apparently): Aesculapian Club: Portland (1907-1917).

For a sense of just how small Portland's medical community was at the turn of the last century, this document cannot be beat. Written by M.B. Marcellus, M.D., in April of 1957, it provides a delightful snapshot of the tight-knit (dare we say inbred?) Portland medical scene:

The Aesculapian Club was organized in 1907. Doctor William House suggested its organization and as he was associated with Drs. Coe and Gillepsie [sic] as house-physician at their Sanitarium in the Mt. Tabor District of the city-the first meeting was held in the office of Dr. Luther Hamilton in the Dekum Building, 3rd. and Washington Sts. [Follow that?]

Several years later at a regular meeting, which were held monthly at the residence of the member following a sumptious dinner Dr. Robert Yenney who was a guest made the remark that he could not understand why we did not elect him as a member for he was always present anyway; after a little discussion it was ruled that he be elected as an Honorary Member which was done and as it was an annual meeting he was elected President also [so there!]. The meetings were held in rotation through the summer of each year also. Following the dinner some member read a scientific paper and each member was compelled to participate in the discussion, which was most beneficial in enforcing the study which the busy practitioner otherwise might fail to do [sound familiar?]. The members also became great and true friends.

A very active interest was taken in Medical Politics too, viz. Practically every member was on the faculty of the Medical School , the staffs of the Good Samaritan, St. Vincents, Emanuel, Multnomah County and other Hospitals; State Board of Health had several of its members including the State Health Officer (Secretary of the Board); another was City Health Officer; one or two others were on the State Board of Medical Examiners and the various officers of the State Medical Society were from its members, such as White was President of the City and County as well as of the State and also State Health Officer. Marcellus was a member of the State Board of Health as well as City Health Officer of Portland and at the same time Regimental Surgeon of the 3rd. Oregon Inf., Oregon National Guard; served in World War I as same and Ass't Division Surgeon of the 41st. Division in France.

House was first Pres. and Hill was Secretary from the beginning to the end of the organization. Each and every member was Pres. for at least one year. Mrs. Hill also a physician destroyed the Minutes a few years ago. [!!! That's what you get for callin' her Missus and not Doctor!].

There are a lot more docs in Portland these days, and many more clubs flourishing in the city. While the numbers have changed, the spirit of the groups has not: every meeting is filled with talk of Medical Politics, but also with great and true friends.

I just hope they aren't tickin' off the spouses of the secretaries, because minutes would sure be nice....
Posted by Sara Piasecki at 3:33 PM No comments:

First Gem from the Rough: Binsie

I promised I would share some of the gems we discover in the chaotic boxes of the recent donation of 28 storage cartons of miscellanea, so here's #1: 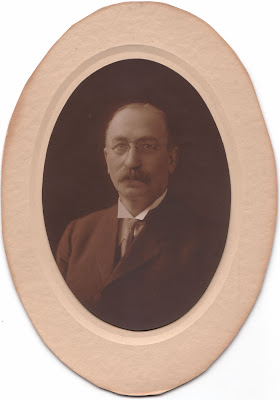 Otto Saly Binswanger was born April 20, 1854 in Osterburg, Bavaria. After many years of schooling in Germany, he came to America circa 1877 with an advanced degree in scientific and analytical chemistry. He attended the University of Maryland School of Medicine, graduating with honors in 1882. In May of that same year, he relocated to Portland. From 1882-1886, Binswanger served as Professor of Chemistry and Toxicology at the Willamette University Medical Department; seceding from WUMD with a cohort of colleagues, he assumed the same position at the newly formed University of Oregon Medical School in 1887. He remained on the faculty at UOMS until his death in 1917.

"Binsie" (as he was affectionately called) was often baited by his students because of his thick German accent ("sulphite" and "sulphide" sounded the same to classes of confused young chemists). Perhaps that's what made him, in the minds of some, "inordinately strict." The high score in his classes was typically 70; a score of 71 or--almost unheard of--73 indicated true brilliance. However much they may have teased him, many students loved Binsie, and several would never have made it through medical school without his financial support.

This image was donated to UOMS (then UOHSC) by Otto's son Alvin D. Binswanger in 1976.
Posted by Sara Piasecki at 2:23 PM No comments: