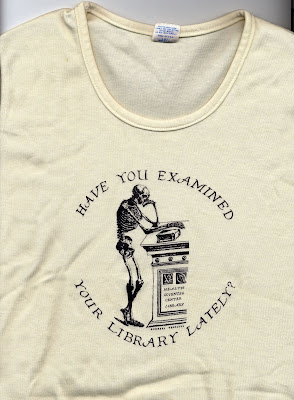 Well, ok, they really aren't that tacky, but I can't pass up a good alliterative scheme.

In my mailbox this morning was another sample of the OHSU Library's once-thriving t-shirt making activities. Thrice thrived, but none created since my tenure began in 2001. Whatever the cause of the decline of shirts-as-library-ads (Have we ceased to be interested in fashion? Have staff and student modes of dress changed drastically? Is it just that they don't make that great poly-cotton t-shirt fabric like they used to make in the 1970s anymore?) the heyday of library garb will forever be enshrined in Accession 2002-001, the OHSU Library T-Shirt Collection.

Far be it from me to belittle the historical importance of t-shirts. There are whole museums devoted to textiles (like The Textile Museum) and some which have large holdings of costumes (like the American Textile History Museum), and heck--even whole museums devoted to t-shirts (like another aptly named repository, The T-Shirt Museum. We're a literal lot, we museum folk.)

If you're ever interested in studying our t-shirt designs or fabrics--or in, say, modeling them in an historical fashion show--the collection stands at the ready.
Posted by Sara Piasecki at 11:05 AM No comments:

Patient Records: What we do have

While we don't have the patient records from Morningside Hospital, there are some patient records and data on patients in our collections. These holdings are rather idiosyncratic, and since we often get requests for records that people assume should be here, a quick rundown of what we do have at present may be in order. (Of course, this represents what we know; unprocessed collections may yet contain additional records--check back if you have reason to suspect that an unprocessed collection might contain records of interest.)


Arthur J. McLean Collection, 2001-014
Patient records and case reports from 1929-1935. Interestingly, several pages of manuscripts for McLean's articles were written on the backs of patient records. That's not good HIPAA practice, I would think.

Pediatric Patient Records: Doernbecher Memorial Hospital for Children and Outpatient Clinic, 2007-008
Unprocessed, but the collection name is fairly descriptive. Only one folder of data.

We do have a pretty cool handwritten Record of Deaths 1891-1901, which is a wonderful source for data on causes of death in Portland during that decade.

We also have many, many photographs of patients, from several units affiliated with OHSU and from individual physicians. Typically, patients are not identified on the photographs themselves, so there is no way to verify names.

Morningside Hospital Records: What We Know

In the time that I have been History of Medicine Librarian here, I have been asked no less than five times, by five different people, if we have patient records from the Morningside Hospital which operated in Portland during the late nineteenth and first half of the twentieth century. Three of these requests have come in the last three weeks. Since this number probably represents the tip of the iceberg of people interested in Morningside and its records, I thought it best to summarize for Google searchers everywhere:

As far as I know, the patient records from Morningside Hospital are no longer extant.

Here's some brief information on the history of this private hospital:
Established and operated by the Coe family of Portland, the hospital closed its doors in 1968 after many years of service. Its final location was on a 47-acre parcel in southeast Portland, bounded by 96th and 102nd Avenues and Stark and Main Streets. The hospital was closed and the land sold to developers, Lenrich Associates and Interstate Department Stores.

A news article published on June 30, 1968, in the Portland Oregonian noted that many hospital patients were from Alaska. They had been coming to Morningside since about 1905 "under state and federal agreements and including for many years mentally retarded from the northern territory." After the 1964 Good Friday earthquake, the hospital at Valdez, AK, was rebuilt with federal funding, and additional beds were made available for psychiatric patients. As a result, Alaskan patients began to stay in state. The last Alaskan patient at Morningside was returned to the state in 1967.

For more information on the hospital, patrons can contact Special Collections at the University of Washington to get a copy of the 16-page pamphlet The insane of Alaska : for sixteen years administered under the Department of the Interior at Morningside Hospital, Portland, Oregon (Portland, Or. : The Hospital, [1920]). Also, the Oregon Historical Society has the Arthur Robert Smith Papers, which contain some records of Morningside's operations in the 1950s (guide available online).

People seeking information on burials of patients can check the cemetery registers (some available online from Multnomah County GenWeb). Death records can be obtained from the Oregon State Archives (on the web here). Consider also that the bodies of indigent who died unclaimed and intestate were often given to the medical school for study and teaching, and that burial records might not be available for those individuals.
Posted by Sara Piasecki at 12:47 PM 9 comments:

Encounters of a Medical Imagination

We have just received from the author the new book Encounters of a Medical Imagination, hot off the presses from Trafford Publishing. Ralph Crawshaw's new work delights from the table of Contents to Further Reading. The former lists essays entitled:

On Paddling Your Own Camus
The Wondrous Uncertainty of Medical Spirit
On the Remembrance of Things Nearly Past
Cakes & Ale
On Saying Goodbye to Medical Politics
Wicked Medicine
The Humanity of Stewardship
I Do Declare
On Shredding a Medical Career
A Roose by Any Other Name
A Systemic Heaviness
Big Things Delivered in Small Packages
A Cruel Truth of Medicine
Ode to an Angry Doctor
The Willful Doctor
Will to What?
Never Forsaken

There's something for everyone here -- including archivists! "On Shredding a Medical Career" opens with our narrator tackling a career's worth of patient records, all well past the destruction date. His physician's eye sees more than just numbers, dates, symptoms, and scrawled progress notes, and he experiences the tug that often plucks at the archivist's soul: "When sorting charts," he writes, "sentiment and practicality are often at odds, sometimes fiercely. Trashing records of the human heart can never be easy."

Indeed.
Posted by Sara Piasecki at 1:28 PM No comments:

A project of the Women's Studies Department at PSU, the site acknowledges women who: "sustained the city's neighborhoods and families"; "created institutions to meet people's needs"; "contributed to the cultural life of the city"; "organized for social, political, and economic change"; "participated in government service"; "engaged in the economy"; "used their knowledge to help others"; or "transformed the landscape and the built environment."

Medical Women City Builders
Of course, no site devoted to female leaders in Portland's past would be complete without our very own Esther Pohl Lovejoy. The image of Esther haranguing her colleagues at a 1957 meeting of the University of Oregon Medical School Alumni Association is from the collections here in Historical Collections & Archives.

As the site's creators note, many more stories wait to be told. If you would like to help out with this project, you are encouraged to contact them directly.
Posted by Sara Piasecki at 12:49 PM No comments: