Collegium for the Study of the Spirit of Medicine

I received word today that I have been invited to join the Collegium for the Study of the Spirit of Medicine, an informal discussion group within The Foundation for Medical Excellence.

The Collegium is committed to "discussing first principles of caring," and issues of "spirit, morale, and/or soul in medical practice." Begun in 1999, the Collegium has taken on annual themes such as historical perspectives on narrative in medical practice; doctor-patient relations; and the economic, political, and artistic aspects of medicine.

As its brochure notes, the Collegium remains open to questions, challenges, and constructive criticism. I look forward to participating in the group and sharing some of the discussion themes with readers here.
Posted by Sara Piasecki at 12:54 PM No comments: 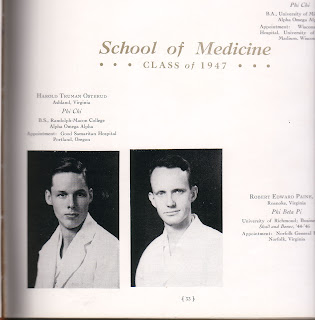 When longtime faculty member Dr. Harold T. Osterud passed away in 2004, I had not yet started posting these notes from the front lines of Historical Collections & Archives, and so did not have the opportunity to reminisce about his contributions to OHSU, OHSU history projects, and the development of public health in Oregon.

Two years later, when other folks here at the university became interested in the work Osterud had done on compiling a history of the Department of Public Health and Preventive Medicine, I was able to look back on my own experience with Dr. Osterud and to talk a little about the materials in the collection of his papers, which we had received from the department shortly after his death.

Today, we received from his widow more materials relating to Osterud's career in medicine -- materials of somewhat more personal nature: news clippings she and he had saved, reprints of articles, correspondence, a few books (three with presentation inscriptions from the authors), and some other ephemera.

One of the items is Osterud's yearbook from the Medical College of Virginia, from which he graduated in 1947. Interestingly enough, Osterud's father, H.L. Osterud, was professor of anatomy at the Medical College during Harold's time there; H.L.'s photograph is included on page 15 of the X-Ray. Also interesting, but not at all surprising, is Mrs. Osterud's comment that Harold received one of his worst grades in his father's anatomy class.

Along with twenty years of physician manpower reports (from 1975-1995) and a copy of William Levin's history of the Oregon Public Health Association, this yearbook and the rest of the materials in this new donation will provide a much more complete picture of Harold Osterud and his influential role in the history of public health in Oregon.
Posted by Sara Piasecki at 3:04 PM No comments: