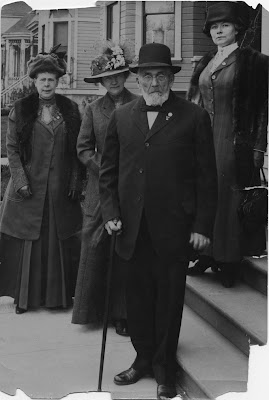 The Oregon Woman Suffrage Centennial Exploratory Committee is now seeking comment and collaboration on a proposal to mark the 100th anniversary of the successful 1912 state campaign with events and activities celebrating women's engagement in politics and civic life.

From the web site:

The upcoming centennial is an opportunity for all Oregonians to reflect on important topics: the ongoing role women have played in our state's history, the lessons of the suffrage movement, the achievements of citizen-based political movements, and the importance of civic engagement -- among many other important historic and contemporary issues.

From the print announcement:

This presidential election has brought unprecedented attention to women's involvement in politics, offering the opportunity to build deeper, more meaningful understandings of how women have used the political system to express their ideas and to effect change in the world around them. Now is the time to begin planning this work and to begin sharing our plans with each other.

Amen sister! For us, it will be another exciting opportunity to showcase the Esther Pohl Lovejoy Collections here in the archives, as well as to explore the role of physicians in the community, medical aspects of gender discrimination, the acceptance (or not) of women into the medical profession subsequent to obtaining the vote--and who knows what other topics we'll think of before 2012.

If you'd like to participate, or know of an individual or organization who may have great resources related to this theme, we encourage you to fill out the survey online or call Janice Dilg at 503-735-5911.

Now that the 2008 election and its historic high turnout is history, there is much greater appreciation for the privilege of voting.

But most people don't realize that out of 44 American presidents, only the last 15 were elected in a truly democratic fashion by all of our citizens -- men AND women.

Until 1920 women were denied the vote, and few people have any idea of the struggle our suffragettes had to go through to right this wrong. It's an amazing, awe-inspiring story!

Now you can subscribe FREE to my exciting historical e-mail series that reveals HOW the suffragettes won votes for women. Believe me, it wasn't easy!

"The Privilege of Voting" is drawing rave reviews from readers all over the world. Dramatic, sequential short-story episodes follow the lives of eight of the world's most famous women to tell the true stories of the courage of the suffragettes. Read this FREE e-mail series on your coffeebreaks and be inspired by these amazing women!

The centennial anniversary of Oregon woman suffrage in 2012 is an important occasion to commemorate not only because it allowed women to voice their opinion in all civic matters, but also because it offered them the opportunity to fully engage in the political process, holding office as well as developing their long-standing role as activists.

The OHSU collection of Esther Pohl Lovejoy is of special significance because Lovejoy was an important model for the first generation of women physicians, and she was a leader in the successful campaign for Oregon women’s suffrage in 1912.

An equally important goal of our effort is to raise scholarly and public awareness of existing archival collections of women’s' materials, and to actively encourage the collection of women’s' materials in the state's archives, special collections, and libraries. Access to historical documents is essential to telling the history of women in the state, creating rich educational programs and curricula, and to supporting the ongoing political efforts of contemporary women.

Sara, thank you for sharing information about the 2012 Oregon Woman Suffrage Centennial with your readers. We encourage anyone with an interest in the centennial and Oregon women’s history to respond to our survey or to contact us at www.oregonsuffrage.org with comments and suggestions.