Having gone to the shelf for a completely different book (I'm compiling a list of all the classics of neurology held in the History of Medicine Collection, a more arduous task than I first imagined it would be), I couldn't help but pull out Floating matter of the air by Tyndall. Talk about a catchy spine title. And miraculously, the book opened to page xv of the Introductory Note, where my eyes first alighted upon the following sentence:

The Essay most likely to try the reader's patience is No. III.

If only all books came with such self-critical reviews...
Posted by Sara Piasecki at 2:21 PM No comments:

The Living Section of this morning's Oregonian includes an above-the-fold article on some current medical uses of hypnotism, "increasingly touted" even by "mainstream medicine" as a therapy for such things as addictive behaviors, chronic pain, and weight loss.

OHSU's own Dr. Robert Butler, Ph.D., who was interviewed for the piece, sounds a note of caution:

Of course, they've had a darn long time to think it over. Health care practitioners have been using hypnosis as a therapy for centuries, and we have a few late nineteenth century texts on the topic here in the History of Medicine Collection. All of them are interesting in some way.

Animal magnetism (mesmerism) and artificial sonambulism, printed in Boston in 1874, is attributed to the Countess C*** de St. Dominique. It is apparently the only extant work by this obscure figure, and only three libraries in OCLC's WorldCat record this edition. A pseudonym, perhaps? And a pseudonym insufficiently opaque, perhaps, to shield the author from contemporary criticism? One can only guess that it was criticism (or ridiculously poor sales) which prevented the publication of the planned "subsequent work" on Spiritualism, "the offspring of Magnetism." Hmmm....

Sales of hypnosis tracts in general must have been fairly brisk, since the market was apparently competitive. The Preface to E.P. Hurd's Sleep, insomnia, and hypnotics (1891) reads:

This little treatise, though long advertised to be a translation of a recent monograph of Germaine See in the Medecine Moderne, is in reality a product of my own pen .... The monograph of Prof. See, with all its excellences, was found to be too brief and too incomplete for reproduction in the Leisure Library.

I wonder how long See's treatment of the subject was; Hurd's comments are contained on 112 small pages, with large margins.

Bernheim's Suggestive therapeutics was a standard text on the subject in its day. Our copy of the 1899 American edition (from the second revised French edition) was well loved by former owner Andrew C. Smith, who signed his named to the front leaf shortly after purchasing it and made pencil notes in the margins. The binding is cracked open in several spots, and one paragraph on page 348 is marked for special attention:

When we see ignorant bone-setters and quacks succeed in curing certain sprains and pains, rapidly, by methods which have nothing reasonable in them and sometimes nothing rational, is it not here too that the patient himself, to a certain degree realizes or facilitates his cure by auto-suggestion?

While we don't know who the former owner of our dog-eared copy of Hypnotism: its history and present development was, it's clear that he (or she) found some sections shocking. An exclamation point has been placed in the margins next to the author's statement that "in 1866, Liebault of Nancy pointed out the use of hypnotism as a valuable means not only of curing disease, but also of education for the improvement of character and morals." This would come as no surprise to the modern practitioners who use hypnotism to treat addictions, which were often considered moral failings rather than diseases.

And lastly, this may be my favorite cover in the whole History of Medicine Collection. Enjoy! 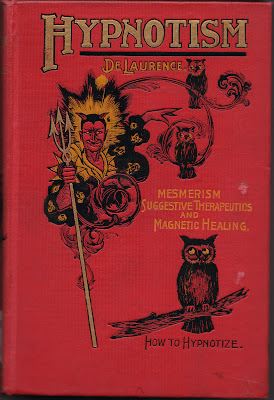 Posted by Sara Piasecki at 1:46 PM No comments: 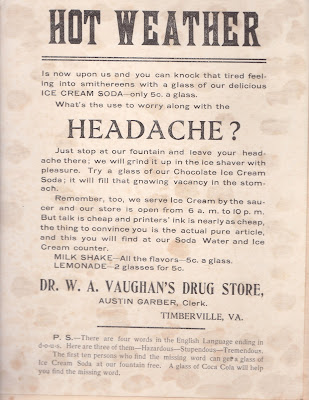 Apparently, the phenomenon of the ice cream headache was unrecorded prior to the twentieth century.

Some resources for information on the etiology and therapy of ice cream headache:

And, of course, the Wikipedia entry on Brain freeze