Benninger, professor in the OHSU School of Medicine Dept. of Surgery and the School of Dentistry's Departments of Oral Maxillary Facial Surgery and Integrative Biosciences, entered medical school in England with degrees in chemistry and exercise physiology. During his medical training he did residencies in orthopedics and trauma and became staff physician and lecturer of anatomy at Guys Hospital in London. He later received a MS degree in sports medicine from the University of Nottingham. With his training in sports medicine be became a physician to both professional and amateur athletes and was a member of the British Olympic Team of Physicians. While in the UK, Benninger invented the joint proprioception machine for upper limb.

Here at OHSU, he has helped develop the stroke rehabilitation machine at the Neurological Sciences Institute; organized and taught OHSU's first clinical anatomy course for undergraduates; and has won teaching excellence awards for the past six years. He is currently active in organizing the Oregon Anatomy Association.

His own groundbreaking work on cranial nerves is the subject of today's talk, along with an historical overview of cranial nerve description from Galen to the present day. Please join us!

A reminder for those outside of the Portland metro area: streaming video of today's talk will be available on our web site shortly after the event. Stay tuned for the posting of the link on our Lecture Series site.
Posted by Sara Piasecki at 8:15 AM

In the great big bonanza of new-to-us items from the Medical Museum Collection, there is a history of Deaconess Hospital in Spokane, Washington. Unlike the history of Vancouver Memorial, which we talked about yesterday, this history is a glossy, polished piece of institutional writing. Eight Decades of Progress: Deaconess Hospital, Spokane, Washington is heavily illustrated, having approximately as many images as it has pages.

The story begins in April 1892, when the first Deaconess Home opened in the private residence of Mr. and Mrs. Franklin P. O'Neill. There, Deaconesses Emma Kenyon and May Raymond cared for the "sick and needy." Much like the People's Institute & Portland Free Dispensary (which became the OHSU Outpatient Clinics), the Deaconess Home concerned itself with the social and spiritual welfare of their patrons as well as their physical welfare. In 1897, the Maria Beard Deaconess Home and Hospital was dedicated, thus inaugurating the history of the hospital as a freestanding institution.

The story continues up through the end of the 1960s, and then launches into some speculation about the future of Deaconess and health care in America ("Experts say that by the time the 1970's have become the 1980's, heart attack might be a thing of the past." I guess they're still working on that one.)

Not only are the predictions incorrect, some of the facts are noticeably wrong also. For example, we learn on page 2 that the home of the O'Neills was at 1209 W. 5th, while on page 3 the address is listed as 1205 5th. Again, new information almost inevitably leads to new questions...
Posted by Sara Piasecki at 12:02 PM

Yesterday, going through the Medical Museum Collection boxes in a routinized way, we found quite a lot of interesting little gems (such as the almanac featured on yesterday's post).

One of the items newly re-found is A History of Vancouver Memorial Hospital (Originally named Clark General Hospital), 1929-1970 , a photocopy of a 67-page typescript document dated December 31, 1970. Searches of local and national catalogs indicate that this may be a unique document. If so, it's an important piece to the puzzle of hospital development in the Pacific Northwest.

The document itself won't win any literary prizes: largely a compilation of dates, statistics, and information on budget and staffing, the history reads much like the meeting minutes from which it was, in large part, culled. But the preface, written by Paul S. Bliss, strikes a stirring note:

The comparatively brief outline cannot be but a collective glimpse of the thousands of individuals who form the basis for the hospital's being. They are those patients, their families and friends, who have experienced joy, sadness, pain, relief and individually woven the pattern of the hospital into the fabric of memory.

The idea for Clark General Hospital (later renamed Vancouver Memorial Hospital, now Southwest Washington Medical Center) was born in "the Y.W.C.A. rooms over Reder's Drug Store" on September 14, 1927. Included in the group of twenty-eight men assembled to discuss plans for a new hospital was R.D. Reder himself, and I wonder whether an understanding was developed between the druggist and the medical men about pharmaceutical supplies for the new institution. This, of course, the history does not answer. Isn't it wonderful how new information always leads to new questions?

By the by, it may sound like we have no idea what we're doing over here, finding new things in old collections, but let's keep in mind the fact that it has only been a few years since stable funding has allowed us the freedom to go back through legacy collections and really get them processed. It definitely makes every day an adventure!
Posted by Sara Piasecki at 11:31 AM

Should it stay or should it go, now? 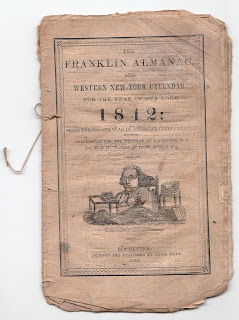 Ah, the age old debate between the packrat and the housemouse (or however that saying goes): keep the miscellaneous ephemera only tangentially related to established collections, or get rid of it? One of the items in question is this lovely little copy of The Franklin almanac and western New-York calendar for the year of our Lord 1842.

Why? Why do we have this? Sadly, that information has been lost in the mounting sands of time. It was just uncovered in a box of Medical Museum Collection items, without provenance or donation information. Sure, it's lovely. It's obviously not complete, lacking at least one page (though how many more than that is difficult to tell). Thirteen libraries are shown as holding this title in OCLC's WorldCat. We are not near Rochester; the almanac as is contains no medical information; there are no marks of ownership to indicate whether it belonged to any person affiliated with the university. But it is the sort of thing one hates to discard, the sort of thing that many assume should be kept. It cries "rare books." It even smells good.

Today, I chanced to read the "Public Domain" column in the latest issue of Fine Books & Collections. Adapted from Eugene Field's The Love Affairs of a Bibliomaniac (1899), the piece is entitled "On the odors that my books exhale." Describing his own fondness for the smell of books, and in particular of libraries, Fields addressed the strange case of the British Museum, where patrons

complain not infrequently that they are overcome by the closeness of the atmosphere in that place, and what is known as the British Museum headache has come to be recognized by the medical profession in London as a specific ailment due to the absence of oxygen in the atmosphere...

Put on the case to make a scientific explanation for this anomalous library, one Professor Huxley conducted a series of experiments and concluded that "the presence of poison in the atmosphere was due to the number of profane books in the museum." A modern reader can only wonder whether there might not be a second, perhaps more scientific, explanation (low light in the reading room comes to mind, but then I'm not a doctor).

We often get comments about the smell of the History of Medicine Room from first-time visitors. While we haven't made a concerted effort to question patrons and compile comments, we have had more than one person describe the smell as "cloves." Our little almanac doesn't smell like cloves, to me, but does have a bit of Field's "fragrant, gracious" air to it. Reason enough to keep it? I guess we'll have to sleep on this one.
Posted by Sara Piasecki at 3:08 PM

We recently accessioned a "new collection" into the Archives, which is neither new nor a collection, strictly speaking. The Charles J. Smith Papers, Accession No. 2007-006, have been culled together from little tracings left throughout our holdings in forgotten years past.

From the Biographical Files, we removed original correspondence between C.J. Smith and several correspondents, along with the original manuscript for his article "The economic side of preventive medicine."

In the Pacific Northwest Archives, we located the typescript report "Malaria," distilled by C.J. from some of the very correspondence we found in the Bio Files. The 1928 document aggregates the responses from "the ten oldest physicians in the state" to a question of the prevalence of malaria and typhoid in Oregon in pioneer days. For example, Dr. W.N. Byrd wrote, in part:

I recall when any of us developed a chill, we were liberally doped, with either "Ayre's Ague Cure" or "Indian Collagogue" two patent remedies, vaunted for the cure of malaria. They were vile concoctions to take, but apparently effective; for usually in 3 or 4 days, the "chills and fever" would be gone, and at the end of a week's time we had to submit to a couple more days of treatment by way of prevention."

Dr. A.J. Giesy contributed: "We had plenty of malaria in all its phases: Also typhoid fever; for years. I do not believe that I was without a typhoid fever case on my hand. That changed suddenly when we went from Willamette river water to Bull Run."

We also picked out of the PNW Archives a manuscript, later titled "The origin of the Eastern Oregon Medical Society," written by C.J. circa 1901. In fact, the pages appear to be minutes of two meetings of the nascent Society and a list of members. The first meeting, which established the medical group, also saw discussion of the territory to be covered and the "formation of a fee bill." In the later meeting, we learn, "Dr. Andrew Smith of Portland gave an able address on appendicitis. Dr. Harry Lane of Portland talked about insane people in general."

C.J. himself seems to have been quite a character. Born 1864 near Columbus, Ohio, he came out west to Walla Walla after earning his medical degree from Bellevue Hospital Medical College in 1888. He was mayor of Pendleton, Oregon, from 1897-1898 and state senator from 1902-1910. In 1914, he even ran against Dr. James Withycombe for governor. Interestingly, C.J. was a member of the Portland Academy of Medicine until his resignation in 1929; perhaps a clue about the reason for his break with PAM could be located in the records of that group (Accession 2004-009)....

By pulling together these bits and pieces, we have artificially created a small collection of the papers of C.J. Smith which (we believe) will better serve researchers interested in the life and career of this physician, as well as the medical milieu in which he practiced.
Posted by Sara Piasecki at 10:01 AM