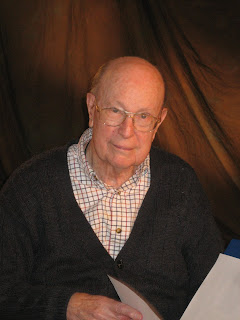 No, it wasn't a history of the Soviet Union, it was our interview with Tyra T. Hutchens, M.D., yesterday afternoon.

We heard about how Medical School Dean Charles Holman asked Hutchens to chair a "secret committee" to investigate the feasibility of developing a faculty practice plan and to provide recommendations for implementation; much contentious debate erupted when the committee finally presented its report to the faculty, but the plan -- with revisions -- was finally adopted.

I did take the opportunity to ask the expert about the dangers of our radioactive Medical Museum Collection pieces, such as our drinking radium (from the J. Chandler Smith Collection) and the Revigator crock. He didn't seem overly concerned, but he didn't ask to see the collection, either ....

For complete details divulged during the afternoon, stay tuned for the video and transcript, both of which will be available for check-out from the Main Library after processing.

A technical note: I'll be out of the office all next week, so there will be a brief respite from posts. See you all again on November 12.
Posted by Sara Piasecki at 11:28 AM No comments:

This afternoon, interviewer Donald Houghton, M.D., will be sitting down with Dr. Tyra T. Hutchens for an oral history session. As with all our oral histories, we hope to capture some of Dr. Hutchens' character as he describes his long career here at OHSU (which was the University of Oregon Medical School when he was on faculty). We also hope that he'll shed more light on this story, told to interviewer Joan Ash by public relations man J.J. Adams:

And, then, which Dean was it? Was it Mackenzie? I got this call one day from the U.S. Bank, and they said, “We just opened a lock box.” It wasn’t Dillehunt. Maybe it was Mackenzie. Yeah, I think it was Mackenzie. Opened this lock box, which hasn’t been opened in years and years, and there’s a little vial in there in a little lead case, and on the side it says “radium.” I called up Ty Hutchens, Chairman of the Department of Clinical Pathology, and we went down, both of us went down to the U.S. Bank. And, of course, if it was radium, the damn stuff puts out radon everywhere. They didn’t know that in those days. So right away U.S. Bank is, “God, what are our lawsuits going to be? Everything may be irradiated.”

Ty goes down—this was back in the early days of the Geiger counters and stuff, and he goes through there, and, thank God, it was clear. Why he had that in there in that lead box—but there wasn’t any radium in it; it was just the lead box. And we were really scared. We did this on a weekend. Ty went down there with this Geiger counter [laughing]. He says, “God,” he says, “I was”—you know, you didn’t wear any protective clothing. They didn’t know enough about it then. But it wasn’t hot. But if it had been hot, can you imagine what would have happened?

ASH: And what was it doing there? What a mystery.

ADAMS: Well, radium used to be used for cancer patients. They didn’t know how volatile it was back in the twenties, or whenever it was. They’d embed radium vials, and things, in people, and it was supposed eat the cancer up. It probably gave them more cancer. But it was one of these experimental things. I don’t know why that stuck in my—or, why I threw that in, but that’s the stuff that we worked on, you know. And, of course, nobody ever knew about this. But I always wondered what would have happened if that had been the real stuff. Gosh, you know, the lawsuits on that would have been incredible, because you’ve been irradiated. I mean, how much did you get?

Posted by Sara Piasecki at 7:55 AM No comments:

We had today our second planning meeting for the upcoming exhibit on women in medicine, Changing the Face of Medicine: Celebrating America's Women Physicians (coming in June 2008 to the Multnomah County Library Central Branch). Discussion about the planned postcard series and some of the candidate women caused me to pull out the autobiography of 1928 University of Oregon Medical School alumna Jessie Laird Brodie, M.D. The following is one nice vignette included in that memoir:

When our oldest son, Laird, was about eight years old, Portland had an epidemic of influenza. My husband and I were both exposed in our practice. When I contracted the disease, we followed our customary procedure of semi-isolation in the house. My husband, consequently, used a temporary couch in the hall. "What's the matter with Laird?" he asked me after a few days. I replied that I had noticed nothing in the short conversations we had had through the open door. However, when Laird next came to say good night, I asked what was bothering him. "Mother, are you and Dad going to get a divorce?" I am sure I showed my astonishment. He finally explained that at school, the boys said that whenever a mother and dad did not sleep together, they were planning a divorce. I explained to him that two doctors did not dare to be ill at the same time, when they had many patients depending on them, and that we were using separate rooms only to avoid passing on infections. I was amazed to realize that children of this age discussed such family problems.

Brodie and her physician husband were fortunate in their ability to practice together and stay together; they were married until Walter's death in 1977. Jessie lived on to see her 92nd birthday, finally passing away in 1990.
Posted by Sara Piasecki at 2:48 PM No comments: 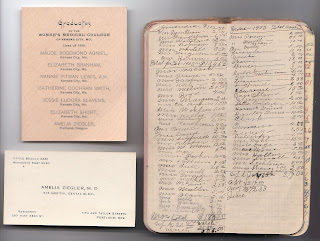 You know, we're not a large repository by any means, but it's amazing how many little gems remain undiscovered by my hands. Continuing our search for information, photographs, books, and museum pieces relating to early female physicians in Oregon, I opened up our Biographical File on Amelia Ziegler, M.D., and found there a great little archival collection, including a tiny Memorandum book she used as a fee book from 1898 to 1921, a business card, and the ticket from her commencement. In the Medical Museum Collection, we had already stumbled across her white coat -- complete with ruffles and blood stains.

Ziegler had a long career and even longer life here in Portland: she lived to see her one hundredth birthday in 1961.
Posted by Sara Piasecki at 3:40 PM No comments:

Discovery under the rustling leaves: a fall time diversion 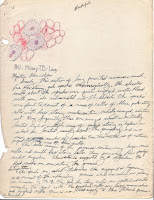 Fans of our first series of limited edition Historic Postcards may be heartened to hear that a second series is in the planning stage; series II will include both historic images of campus life and activities and images of notable women physicians from Oregon. If you haven't seen the first set -- which has sold out, unfortunately -- you can view all ten images (plus thirteen not deemed worthy of postcardization) in the OHSU Digital Resources Library.

It was this morning, as I was pawing around in the archives for good candidate images for series II that I happened across the unprocessed collection of papers from Milton deVries Brunkow, M.D. I wandered down the range of shelves that holds some of our stellar image collections (including the Porter collection, the Labby scrapbook, the Francone drawings, the People's Institute slides, the Hilda Drum scrapbooks, plus Tinker, Norris, and Colonel Strohm's Nurses), and became distracted by three large banker's boxes of unprocessed materials.

Opening box number 2 and pulling out a black faux-leather three-ring binder, I came across the attached drawing -- and many more -- in Brunkow's class notes from a pathology course he took here at the Medical School. As a junior at Reed College, Brunkow began simultaneous studies up here on the Hill, finally graduating with his M.D. in 1939 (same class as Daniel Labby, whose scrapbook now inhabits the same shelving range). Brunkow went on to a long career as a general practitioner here in Portland, both at Emanuel and Holladay Park hospitals; he passed away in May of 1979.

The collection consists primarily of class notes (both illustrated and not), manuscripts, case histories, and reports dating from his time as a student (1931-1938), with a smattering of correspondence and a few medical instruments, accompanied by a few lab slides. It affords a unique perspective on medical education in the early 20th century, and is a wonderful complement to some of our other medical student collections, including Thomas Fox, Matthew Caldwell, and the anonymous 1880 class notes (also unprocessed).

For more information on any of our image or student collections, see our Archives listing -- or contact is directly at homref@ohsu.edu.
Posted by Sara Piasecki at 12:09 PM No comments: