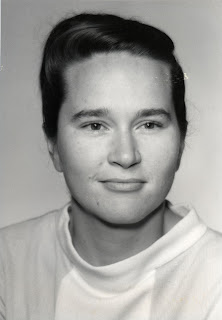 One of the activities we'll be participating in today is an oral history interview with OHSU's Dr. Frances Judy Storrs, M.D. The noted dermatologist has been profiled in (among other places) Images of Oregon Women, a copy of which was, happily, donated to the OHSU Library just yesterday. Ellen Nichols' three-page bio sketch of Storrs focuses on family to illustrate the wellspring of Storrs' inner strength: her parents, both doctors, "encouraged her to believe that happiness and goodness were identified with hard work." Nichols notes:

She is much the same kind of mother her own mother was, Frances believes: intense and vigorous, wanting much for her family. But Frances tempers it with an understanding of their needs, as well.

Being a strong woman and mother has helped Storrs overcome many obstacles in the male-dominated world of medicine: when she was asked to leave a meeting of prominent dermatologists being held at the Portland Arlington Club, a males-only establishment, Storrs got mad. "I had a curtain going up (on my consciousness) .... For me, it was a dramatic experience with being excluded for an irrational sort of reason. It changed my life." Her experience helped change policies of the Medical School Alumni Association and the Oregon Medical Association; Storrs went on to join the ACLU, chair the Citizen's Task Force of the Portland Police Bureau, lead the Medical School's Affirmative Action Committee, and participate in the school's Minority Mentorship Program.

Stay tuned for more of the story, as Storrs sits down with us for a discussion of her career in medicine, her tenure here at OHSU, and her thoughts on the challenges facing women in medicine today.
Posted by Sara Piasecki at 7:06 AM No comments: Links to this post

Major surgery of Guy de Chauliac, or, The latest translation from Leonard Rosenman, M.D.: being a lengthy discourse on the history of medicine

Yesterday, we received what is apparently going to be the last published translation of a surgical classic from the prolific translator Leonard D. Rosenman, M.D. Dr. Rosenman sent us a copy of his latest, The Major Surgery of Guy de Chauliac: an English translation (2007, Xlibris Corp.). Of course, that's the title on the book jacket. The interior title page is a reflection of the original work, and a throwback to the good old days when type was cheap, as it were:

The Major Surgery / of Guy de Chauliac / surgeon and master in medicine of the / University of Montpellier / written in 1363 / here re-edited and collated from Latin and French editions / and complemented with illustrations / supplemented with notes and an historical introduction about the Middle Ages and the life and the works of / Guy de Chauliac / by E. Nicaise / professor in the Faculty of Medicine of Paris / surgeon of the Laennec Hospital / senior member of the Supervisorial Council of Public Assistance / "Science grows by additions made possible by beginnings and further developments. / We are as children perched on the shoulders of a giant. Therefore we are at an / advantage because we can see farther than the giant." Guy de Chauliac, Prologue / Paris / Ancienne Librairie Germer, Bailli'ere et Cie. / Felix Alcan, editor / 108 Boulevard Saint-Germain / 1890 / All rights reserved / An English translation / by / Leonard D. Rosenman, M.D. / 2005.

All of which is to say that this book is really more than just The Major Surgery of Guy de Chauliac. Nicaise's introduction alone is a whirlwind history of ten centuries of medicine and surgery, and includes sidebars on topics such as "clock-time" and the church in the Middle Ages, the practice of witchcraft, and the role of women in medicine. As to the last of these, Nicaise notes (with Rosenman's editorializing):

In our time (ie 1890s) the study of Medicine by women is increasing, especially in some countries (ie other than France).

As with his previous translations, Rosenman has again attempted to make the work of past surgical masters accessible to a modern audience. In the letter he sent along with the book, he throws down the gauntlet to a new generation of surgeon-scholars, suggesting that Wurtz's 1563 treatise Practica der Wundartzney might be just the ticket for a translator to tackle. Any takers?
Posted by Sara Piasecki at 12:04 PM No comments: Links to this post

For those who were unable to attend the October 12 lecture by J. Bruce Beckwith, M.D., "Impressions of Monstrosity: Perceptions of Malformation through the Ages," the link to the streaming video of the talk is now available from the Lectures page of our web site.

Dr. Beckwith showed numerous illustrations of malformations from early works in his impressive personal library, presented some examples of depictions of malformation in the art of early cultures, and touched on the social and cultural perceptions of malformation. Importantly, Beckwith also highlighted the critical importance of older print works to his research on malformation and to medical research in general. He noted that for events that are uncommon (such as certain birth defects) and for diseases or conditions that have largely disappeared from the modern world (polio, smallpox, very late-stage syphilis), older medical literature is the only repository of knowledge on etiology, prevalence, treatment--and even the course of disease in the absence of treatment. As certain diseases make a comeback, as the prevalence of certain malformations in nature seem to rise, only the older literature can provide guidance on the true natural history of the condition.

A nice example of this appeared on the front page of today's Oregonian, in fact. The local paper ran the wire story about the new study showing that MRSA (methicillin-resistant Staphylococcus aureus) is more virulent and more prevalent than the AIDS virus. The co-author of the report, OHSU's own Dr. John Townes, visited the History of Medicine Room to go through the MRSA information in the OHSU Hospital Infection Control Records (Accession No. 2006-003). As the bug evolves, knowing its past history can greatly inform current efforts at control. Thanks to the conscientious research of historically-minded physicians such as Dr. Townes and Dr. Beckwith, medical knowledge continues to move forward through this uncertain age.
Posted by Sara Piasecki at 12:01 PM No comments: Links to this post 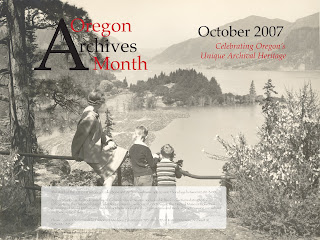 October is Archives Month, and while we are admittedly now half way to November, it's never too late to join in the fun!

We here in Historical Collections & Archives at OHSU invite you to visit us, either during our open hours (Thursdays, noon-3:00 p.m.) or by making an appointment (call 503-418-2287). Come see 16th-century books, some of our 15,000 historical images, artifacts from our 100-box Medical Museum Collection, or archival materials from one of our fantastic collections.

If you're interested in activities going on at archival repositories around Oregon, check out the Oregon Archives Month web site, courtesy of the State Archives.

Archives Month is also a great opportunity to look around at your own personal collections: the photos in your closet, the old letters in your desk drawer, the old stuff your grandfather gave you (which is still sitting in the garage). Call the archivist near you to get advice on handling and storage--or on the best place to donate your rare and valuable items, if you're running out of space at home. There are some great online resources out there as well, including this list of web sites compiled by the preservation staff at Harvard.
Posted by Sara Piasecki at 10:20 AM No comments: Links to this post

Patrons of the OHSU Library now have another resource to which they can turn for information about the history of the health sciences: the History of Science, Technology, and Medicine database is now available through OCLC's WorldCat/FirstSearch.

The HistSciTechMed database, as OCLC calls it for short, indexes 9,500 journals by "integrat[ing] four bibliographies to create the definitive international database for the history of science, technology, and medicine." The 280,000+ records go as far back as 1975, and new records are being added every three months.

Of course, by "medicine," OCLC really means "health sciences". Looking for information about blue baby syndrome and its impact on the history of pediatric nursing? You'll find articles here. Want to know more about G.V. Black's contributions to the science of dentistry? This database will get you started. Need to research the history of cardiac catheterization for a paper? Curious about the development of the role of physician assistants in other countries? Look no further--or, look further, but look here for a start.

To search the HistSciTechMed database, click on the "Databases" tab (between "Home" and "Searching") from the main FirstSearch search page, or use the drop-down menu at the top of the search form to change the selected database from WorldCat to HistSciTechMed.
Posted by Sara Piasecki at 1:26 PM No comments: Links to this post