A reminder to all of our readers in the Portland metro area that the 2007-09 season of OHSU History of Medicine Society Lectures kicks off today at noon:

Dr. Beckwith, a pediatric pathologist, has made significant contributions in several areas of medicine including Sudden Infant Death Syndrome, Beckwith-Wiedemann syndrome, and the National Wilms Tumor Registry. Author or co-author of books on SIDS, anencephaly, and renal tumors, Dr. Beckwith has been a director of the National Wilms Tumor Registry since its founding and is an international authority on pediatric neoplasia.

(If you're out of the metro area or otherwise unable to attend today's event, stay tuned for the announcement of the availability of the streaming video of the lecture on our web site.)

The OHSU Library has long maintained a special collection of materials on SIDS to support families who have been touched by the tragic syndrome. Books in this group can be found by searching "Oregon Memorial Library for Bereaved Parents" in the library catalog.
Posted by Sara Piasecki at 9:00 AM No comments: Links to this post

Putting the O in OHSU

OHSU has a strong commitment to outreach throughout the state of Oregon, in its educational programs, its clinical care, and its community involvement. Its statewide presence is reflected in our Historical Image Collection, which includes numerous Oregon Scenic Views. These images record state history as well as OHSU's role: geologic history (think Mt. St. Helens), climatologic history (magnolias blooming in April), agricultural history, urban development, et cetera. This collection of photographs has recently been enhanced by the addition of (more modern) state scenic views, provided courtesy University News & Publications. Below are a few which were processed today. 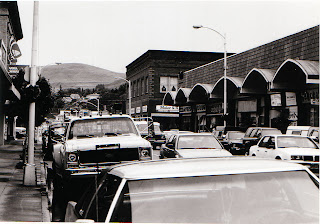 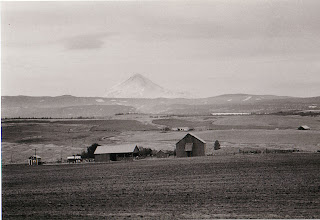 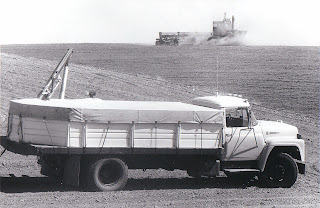 You can see more scenic views in the OHSU Digital Resources Library, especially the Beauty of the Pacific Northwest Collection and the Kent Anderson series of photos.

(Find out more about OHSU's activities in regional outreach, community service and education on the OHSU website.)
Posted by Sara Piasecki at 2:38 PM No comments: Links to this post

There's nothing like looking at a Wednesday calendar full of meetings to turn one's mind toward the weekend. In that spirit, I offer a suggestion on what to do this weekend for readers up and down the I-5 corridor:

The Seattle Antiquarian Book Fair and Book Arts Show 2007 kicks off at 10:00 a.m. on Saturday at the Seattle Center Pavilion. Several of the booksellers have already submitted their featured item lists, and the fair is sure to impress everyone from amateur collectors to, well, special collections librarians. In fact, so much booky goodness will be happening in and around Seattle this weekend that the city has declared this "Book Collecting Week." For more information on the fair and related events, check out the fair website as well as Wessel & Lieberman's recent post.

If you're in Portland and don't feel like burning all that gasoline, you can still get a dose of book-based cure for the winter blues by checking out the current exhibit at the John Wilson Special Collections at the Multnomah County Library Central Branch. Banished! Censored & Challenged Books from the John Wilson Special Collections will be on display through October 31. More details are available from the MCL web site.
Posted by Sara Piasecki at 7:26 AM No comments: Links to this post

With the clock ticking down to the arrival of the National Library of Medicine's traveling exhibit Changing the Face of Medicine: Celebrating America's Women Physicians (in Portland June 2008), I wanted to let local users know about four more titles just received here at the OHSU Library in support of the exhibit theme:

General studies on women in science and medicine:

Athena unbound: the advancement of women in science and technology by Henry Etzkowitz and others (2000)
The authors approach science as social culture and discuss the "hidden barriers, subtle exclusions and unwritten rules of the scientific workplace" that work against women's advancement.

Women scientists in America: before affirmative action, 1940-1972 by Margaret W. Rossiter (1995)
This volume follows up on Rossiter's 1982 study that analyzed "struggles and strategies to 1940." Perhaps some first-hand information on advances since 1972 will be forthcoming in the panel discussion planned as part of the exhibit festivities.

The midwife's tale: the life of Martha Ballard, based on her diary, 1785-1812 by Laurel Thatcher Ulrich (1991)
Winner of numerous prizes, this study of the life and career of the 18th-century midwife Martha Ballard sheds light on the both the medical landscape and medical practices in early America.

Science has no sex: the life of Marie Zakrzewska, M.D. by Arleen Marcia Tuchman (2006)
My personal favorite, simply because Zakrzewska was my paternal grandmother's maiden name. The author notes in her introduction: "Zakrzewska's name, which her contemporaries found unpronounceable and which the series' producers noticeably misspelled, has now been all but forgotten." But beyond that (!), the book is a wonderful study of this pioneering female physician.

Bonus information for those who have read this far:
The online component of the new exhibit, One of the Best of a Rare Breed: Melvin Paul Judkins, a pioneer in coronary arteriography is now available on our exhibits page. As always, past exhibits can still be experienced virtually by following the link to the Previous Exhibits Index. Enjoy!
Posted by Sara Piasecki at 11:52 AM No comments: Links to this post

Donation with a caprine connection

We received a donation in the mail all the way from the opposite coast, and still the chain of serendipity did not break: it tied right in with something I was just working on locally--and not even in a six-degrees-of-separation sort of a way, either.

Daniel King has donated a nearly mint condition Clay-Adams dissection kit (King's research places its manufacture ca. 1920s-1930s) to our Medical Museum Collection. Noting that the ca. 1949 Clay-Adams set in our holdings was listed as incomplete, King offered us his father's kit in honor of the elder King's work in the health food industry. Along with the instruments, King included a copy of a 1934 brochure entitled "The Adventures of a remarkable food." It begins:

Goat milk products would still be in obscurity if it were not for the inquisitive mind of Mr. King. The story of how Mr. King was able to improve the health and reproductive capacity of his fur bearing animals and later transfer his experiences in the rearing of a family, is an interesting an valuable lesson for all health seekers.

The fur-bearing animals in question were mink and fitch (polecats, for those of you out there who, like me, had never heard of fitch) whose numbers swelled so dramatically on the King diet of "foods containing a high mineral content ... [and] Viosal, a mineral concentrate derived from goat milk" that the Kings started the Sky Meadow Fur Ranch in Norwalk, CT. After receiving "local and national attention" for the experimental results he had achieved, "Mr. King obtained the active cooperation of farmers and goat breeders and organized the King's Goat Milk Laboratories for the purpose of standardizing and testing goat milk and its products." A list of available goat milk products, with prices, is included on the back of the pamphlet.

What could this possibly have to do with anything I might already be working on? Goats! In the 1960s, Dr. James Metcalfe conducted an enormous amount of cardiovascular research involving goats. I'm finally getting around to the last few boxes of photographs donated by University News & Publications earlier this year, and one of the folders was labeled "Animals." Sure enough, Metcalfe's goats were included. Apparently, the research involved keeping them--and the research staffers--happy! 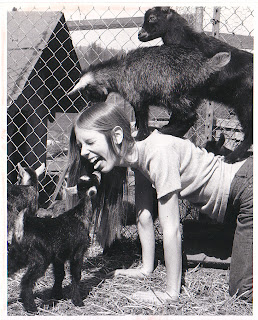 Posted by Sara Piasecki at 12:41 PM No comments: Links to this post