Periodically, enough new finding aids in want of subject headings (in our case, MeSH terminology) accumulate in my folder that I am spurred to open it up and examine the contents. Since we've recently begun a project to get some of our legacy finding aids into the DACS format, these "new" finding aids are often for older collections -- but that doesn't mean they're not new to me (and you)!

Here are some gems from the latest batch (stay tuned for links to the full guides from our Archives page):

Portland Academy of Medicine Records, 2004-019
18 boxes – 9 linear feet; 1906 – 1961 (inclusive), 1925-1961 (bulk)
Modeled after the New York Academy of Medicine, the Portland Academy’s goals focused on the investigation and promotion of the science and art of medicine, and the creation and maintenance of a public medical library located at the University of Oregon Medical School (that's us!). In the 1940s, the Academy created the Medical Research Foundation. The notable things in this collection include a list of "potential members" as well as a list of "black balled members."

Clarice Ashworth Francone Medical Illustration Collection, 1999-002
10 boxes – 8.5 linear feet; 1936-1969 (inclusive)
Francone, described by one faculty member as "one of the last of the red hot mamas," was the university's medical illustrator from 1929 to 1969 -- and was for many of those years the only medical illustrator working in Oregon. The collection includes sketches, working files, and publications of this prolific artist. Before her death in 1981, Francone was invited to contribute examples of her work to the Archives of Medical Visual Resources at the Countway Library, Harvard University.

Oregon State Tuberculosis Hospital and University State Tuberculosis Hospital Collection, 2000-001
2 boxes – 2 linear feet; 1920-1973 (inclusive), circa 1920 - 1960s (bulk)
People always ask us for patient records and records of procedures performed at hospitals not only in Portland but throughout the state. Well, we don't have much, but we do have this collection, which includes surgical logs, admissions records, and lots of photographs.

Southern Oregon Medical Association Records, 2004-012
2 boxes - 1 linear foot; 1892-1961 (inclusive)
The Southern Oregon Medical Society became the first district medical society in the state when it was established on May 16, 1892. The average attendance at meetings for the first ten years was from five to nine members, with two or four visiting doctors. By 1910 its members numbered fifty-five, and by 1940, eighty-six. In 1900, the Society took an active part in urging the organization of a State Board of Health, preparing resolutions according to the sentiments of physicians in southern Oregon. The minutes record the first annual meeting in 1894 to the seventieth annual meeting in 1961. The book also contains the members’ addresses, medical schools, graduation dates, and admission dates, and contains a name index of members, making this an absolute treasure trove of information about rural medicine in Oregon in the late 19th century and the first half of the 20th century.
Posted by Sara Piasecki at 12:00 PM No comments:

You heard me: Lebenswecker. (It means "life awakener" in German).

I confess I wasn't familiar with this term either, until a researcher from Australia contacted us for information about three Lebenswecker in our Medical Museum Collection here. Now that researcher, Dirk H.R. Spenneman, has published his findings in an 87-page article for the journal Studies in German Colonial Heritage (n.4, 2007). The journal is available online, and the article in question, "A Baunscheidt homeopathic medicine kit in the Jindera Pioneer Museum," can be found full-text here.

Once I got over the shock of seeing us listed with such repositories as the "Berliner Medizinhistorisches Museum, the Mamiya Medical Heritage Center at the Hawai’i Medical Library, the Museum Boerhave, Leiden, the Newcastle Medical Museum, the Pharmazie-Historisches Museum der Universität Basel, the Smithsonian Institution in Washington, the Thackray Museum, and the University of Iowa Medical Museum," as holders of specimens of Baunscheidt Lebenswecker, I actually gleaned some great information from the study.

Carl Baunscheidt (here's the Wikipedia entry, for German readers) was born near Hagen, Prussia, in 1809. He received his education at the Fellenberg Institute in Switzerland, where he studied chemistry, physics, mechanics, and horticulture. After graduation, he joined the Institute staff and "acquired, through reading, a general understanding of contemporary medicine." I do so like it when inventors of medical devices have a passing knowledge of the health sciences. Besides the popular Lebenswecker, first produced in 1848, Baunscheidt developed a smallpox vaccinator, a breast pump, and an artificial leech. As Spennemann notes:

"Swelled by the success of his Lebenswecker and the associated oil, Baunscheidt also commenced to produce a range of pharmaceutical products - all without any formal medical education. He produced and sold collodium, a cream against eczemas, a mouth wash, drops against cholera, an elexir [sic] that was supposed to cleanse the blood, a balsam against rheumatic problems and gout, a balsam for the hair, and a treament of black heads."

Whew! The recipe for his trademark oil was secret, but critics charged it contained elements which were subsequently shown to be carcinogenic. Take-home message: Beware the amateur druggist.

The Lebenswecker did work, though, at least for some of the many illnesses it was purported to cure. Spennemann states that the application of the instrument and the patented oil "was in essence a mechanical replication of the mosquito bites." Sounds comforting, doesn't it? Baunscheidt suggested that it worked because it created "additional pores" in the skin, allowing toxic substances to be more readily exuded. Others believed that the instrument was akin to acupuncture, a connection which Baunscheidt himself denied. Whatever its healing properties, the Lebenswecker proved extremely popular; the company started by Baunscheidt in the 19th century was still producing the instruments when it was destroyed by the Allied bombing attack on Bonn in 1944.

Baunscheidtism is still embraced by many homeopathic practitioners today, in fact. A keyword search of our catalog for "baunscheidt" retrieves, fascinatingly enough, 19th century editions in the History of Medicine Collection as well as modern texts from the National College of Natural Medicine down the hill.

If every object in the Medical Museum Collection turns out to be this interesting, we may spend the rest of our careers on it!

One of the Best of a Rare Breed 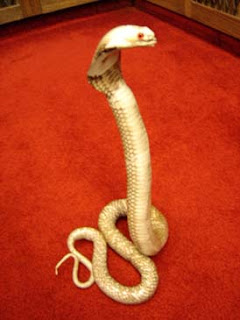 Yesterday, we installed our latest exhibit, “One of the Best of a Rare Breed: Melvin Paul Judkins, a Pioneer in Coronary Arteriography,” now on display in the main lobby of the OHSU Library. Among other items, the exhibit includes a cobra mounted in strike pose, presented to Judkins by an Indian physician in honor of his development of the "cobra catheter." (Isn't he cute?)

Judkins, a 1947 graduate of the Loma Linda University School of Medicine, began his career as a family practitioner in the small town of Sumas, WA. Unsatisfied with the hectic pace and overwhelming demands of a solo practice, a forty-year old Judkins decided to make a career change. With the encouragement of a former family practitioner turned radiologist, Judkins began to search for a residency program that would accept someone of his age.

After being turned down by the Mayo Clinic, he chose to come to Portland to attend the University of Oregon Medical School as a resident in radiology under Charles Dotter, M.D., and P.E. Billimoria, M.D. That year, Dr. Judkins collaborated with Dr. Dotter in the development and introduction of percutaneous transluminal dilatation of narrowed peripheral arteries.

In 1966, Judkins was appointed Director of Cardiovascular Radiology for the UOMS Hospitals and Clinics as well as Professor of Radiology in the Medical School. He held both positions until 1970, when he returned to Loma Linda. While at UOMS, he introduced the Judkins Technique of selective percutaneous transfemoral coronary arteriography, a technique which has been used worldwide. He and his colleagues developed safety and safety-J guidewires and pioneered the application of a thin Teflon coating to the guidesprings.

Dr. Judkins died January 28, 1985. During his lifetime, he was recognized internationally as an authority on radiologic equipment and on the diagnosis of coronary artery disease.

Materials from the Melvin Paul Judkins Collection (Accession No. 2005-022) will be on display through January 2008. Questions about the exhibit can be sent to homref at ohsu.edu.
Posted by Sara Piasecki at 7:58 AM No comments: 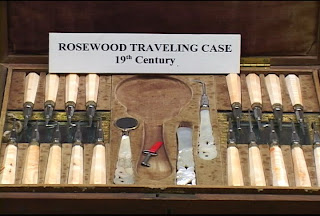 Great news for those interested in antique dental instruments and the history of dentistry! Images of some of the objects in the OHSU School of Dentistry's Dental Museum Collection are now available in the OHSU Digital Resources Library, where they join digital photographs of the objects in the Medical Museum Collection here in Historical Collections & Archives. Now you can take a virtual tour of all the old instruments and apparatus--without getting wet going from one building to the next!

And speaking of images and dentistry: the Oregon/SW Washington edition of Doctor of Dentistry has just announced Art Gallery 2007, an opportunity for dentist-artists to submit their work for publication in the December 2007 issue of the journal. Interested? See the September issue (v. 7, no. 8) for details.
Posted by Sara Piasecki at 8:27 AM No comments: