Working through the faculty files from News & Pubs, I just answered another lingering question of mine: what were the Metcalfe goats?

Earlier this year, I had processed some negatives housed in a glassine sleeve marked "Metcalfe goats." Being negatives, they weren't easy to browse through, and anyway I was in a bit of a hurry, so I classed them into the Historical Image Collection as "Cardiology Research" (noting the animal nature of the images on the negative folder) and had done with it.

Today, I reached the file on Metcalfe in the unprocessed faculty files. James Metcalfe was chair of cardiovascular research here at the Medical School, and worked on heart research from the 1930s through the 1970s. Included in his file was an article from the Paso Robles Press, dated June 23, 1981, entitled "Goat discovered in medical research." I love newspaper headlines: one could almost believe that upon autopsy, a man was found to have died with a goat trapped in his intestines. Of course, that's not quite what they meant.

The article begins: "In the 1930s, a University of Oregon chemistry professor, Dr. James Metcalfe, searched for ways to study the cause of blood diseases in man. His search was thorough. So thorough, in fact, that it was in Africa that his source of study was found." "Metcalfe's discovery," as the article put it, was the African pygmy goat which, because of the nature of its blood system, was ideal for use as a lab animal for Metcalfe's research. While there seems to be some disagreement about when these goats were originally introduced to the United States (anyone out there looking for a research project? Was Metcalfe the first to bring these animals to our shores?) it is clear that shortly after their introduction for use as lab animals, the goats jumped to the domestic and pet markets. The rest of the Paso Robles article, in fact, records at length the experiences of a Mr. and Mrs. George and Mary Shreve with their beloved African pygmy goat, Abraham.

Metcalfe's goats, of course, were not pampered pets, but valuable research animals. Having obtained a pair of goats with funding from the Oregon Heart Association, Metcalfe had increased his herd to 49 individuals by 1975 and was using them to learn more about heart function, blood circulation, and oxygen transfer from mother to fetus.

Friday fun fact: I know, it's not Friday, but I won't be here tomorrow, and since we're on the topic of animals I thought I'd alert readers to the latest animal-based therapy to hit the medical scene: ichthyotherapy. Seriously. I have blogged previously about our therapeutic friends the leeches and the parasites; now the doctor fish, Garra rufa, is getting in on the act. New research, reported in the July 14 issue of the journal New Scientist (p. 52), indicates that the gentle nibbling of the fish, along with exposure to UV light, can remove the dead, damaged skin of psoriasis sufferers and prevent recurrence of symptoms for as long as eight months. I bet it feels good too--so keep your eyes peeled for the new spa treatment fad. We'll probably see celebrities appearing in public with fish attached to their faces soon...
Posted by Sara Piasecki at 9:46 AM No comments: 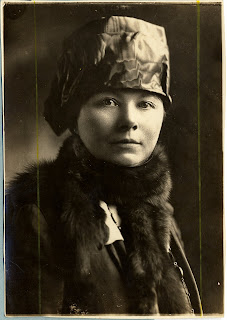 Hot off the presses, The Women's Movement in Wartime: international perspectives, 1914-1919, has just been donated to the OHSU Library by one of the authors, Dr. Kimberly Jensen of Western Oregon University. Jensen's chapter, "Esther Pohl Lovejoy, M.D., the First World War, and a Feminist Critique of Wartime Violence," highlights the wartime work of the 1894 University of Oregon Medical School graduate.

Esther Pohl Lovejoy visited France in 1917 to "determine what women physicians might advantageously do in the way of relief work in that war-stricken country;" when she returned, she embarked on a speaking tour and also wrote about her trip in her book The House of the Good Neighbor. Jensen expounds upon the conclusions Lovejoy drew from her time in France, including her belief that women were equal with men, that women needed to unite across class and national boundaries to benefit the war effort, and that the war affected women very differently than men. Lovejoy's experiences during the war led her to formulate her "vision" of international health which, in Jensen's words, "could enable the 10,000 medical women worldwide to shape international policy and peace."

While Jensen's chapter on Lovejoy is the only one to address the medical response to the war, the rest of the essays are equally interesting reads. The full table of contents is available online.
Posted by Sara Piasecki at 6:58 AM 1 comment:

We are, as of today, the proud owners of a new external hard drive with two terabytes of storage capacity--the whole room feels bigger, somehow.

Two terabytes of data (which I still cannot say without thinking of pterodactyls, which might suit an "historical" room better--but I think digital storage will be more useful to us than two flying reptiles): in 2006, R. David Lankes compared this amount of data storage capacity to an academic research library, but clearly he was thinking text rather than images. Our 250 Mb external drive, which we received a short time ago, has 70 Mb of free space remaining--and we've barely begun to utilize our new large format scanner.

Our digitization policy calls for scans to be a minimum of 600 dpi, in uncompressed tiff format. We have found that this size is generally adequate for any derivative products we or patrons might need to use (from prints to web images), although we have scanned a few things at higher resolutions when trying to get the best image possible. We scan pretty much everything in 24 bit color, too, even the black-and-white photographs, because the color captures the nature of the original so much more fully than a grayscale scan. Sepia tones, coffee stains, editorial marks--our scans are intended to represent the original physical item to the maximum extent possible; derivative files can be cleaned, cropped, and generally "prettified" depending on the intended use.

So, while our 2T drive may not be able to hold our entire Historical Image Collection, for example, it will go a long way towards giving us some breathing room. What's our backup plan, the savvy tech user asks? Our backup is the OHSU Digital Resources Library, and its backup plan is maintained and executed by the university IT folks.
Posted by Sara Piasecki at 1:19 PM No comments:

Networking with colleagues has been the name of the game the past few days.

Today, we had a visit from Dr. Elliot Weinstein, M.D., co-curator of the Southern California Medical Museum. Affiliated with (but independent of) the San Bernardino County Medical Society, the SoCal Medical Museum has slowly been accreting material from neighboring county medical societies and now has a sizeable collection of medical and dental artifacts, as well as a small library of mostly 19th century medical texts. Dr. Weinstein sought us out after running across the digital photographs of items from our Medical Museum Collection in the Digital Resources Library. He's compiling a list of medical, dental, and pharmaceutical museums, from the small to the well-established, and would be grateful to hear about others. The museum's phone number is listed on their website, www.socalmedicalmuseum.org.

Also, this week marks the launch of the Small Museums brochure, an all-volunteer effort led by Portlander Carye Bye, curator of the Bathtub Art Museum. Carye graciously included our collections here in Historical Collections & Archives, and our exhibit space in the OHSU Main Library, in the list of off-the-beaten-path museums. We will eventually have these brochures freely available in the library here for anyone interested in seeing more of Portland's (smaller) cultural institutions. You can check out the full list at hiddenportland.com.
Posted by Sara Piasecki at 1:58 PM No comments: