We were truly honored today to receive from the OHSU Department of Psychiatry a donation of three document boxes of the papers of George Saslow, M.D., who died in September of last year at the age of 99. I couldn't resist taking a quick peek into the boxes before handing them off to our Archivist...

The boxes are primarily filled with offprints of articles written by Saslow, some with his longtime local collaborator Joseph D. Matarazzo, others with his early research colleague Eric Ponder. The earliest papers contained in this donation are two from 1929: "The measurement of the diameter of erythrocytes" (with Ponder, no indication of publisher) and "On the supposed partial liberation of haemoglobin from the mammalian erythrocyte" (solo authorship, Q J Exp Physiol, 29(4); 26 July 1929). Not quite what you'd expect from a psychiatrist, perhaps!

The collection also contains copies of invited talks given by Saslow, a small amount of correspondence, and some original research notes. There is a mimeographed copy of the Saslow Screening Inventory; papers running the gamut of psychiatric research, written by Saslow and others; and also a surprising bit of material on transsexualism and pseudohermaphroditism.

No article seems to have been overlooked: Saslow published "Some observations about personality development in college women" in the low-circulation Northwest College Personnel Association Newsletter in Winter 1960. It has been lovingly filed and kept with other groundbreaking work.

As the materials are arranged and described, more details will emerge. If you're interested in learning more about the collection or George Saslow, we'd love to hear from you--a request is just the sort of excuse we need to spend more time on this interesting set of papers!
Posted by Sara Piasecki at 3:13 PM No comments:

Mystery with a surprising conclusion!

Walking into the Old Library Building on my way into work this morning, I stopped to examine the Scientia Medica Continuet motto--about which I now know so much more than I did last week. Standing there atop the steps, I saw something I had never noticed before: the faint outline of letters once affixed to the facade, just below the motto and a band of patterned stone. If you look very carefully at the bottom left of this photograph, you can just make out some of the traces left by the signage.

To get independent verification (because my eyes are getting old, really), I dragged the Archivist and our volunteer out there to squint up at the spot. Sure enough, they saw what I had seen. Now, the hunt was on: I need to determine when the clinic existed and where.

I started with the Historical Image Collection: Did any of our photographs of the building exterior show the sign when it was in use? Not a single one, even though we have two folders of such photos. I had to abandon the search to turn my attention to other things, and assumed I'd pick up the trail later.

Shortly before noon, however, a rather exceptional thing happened. We got a visit from the chair of Medicine here at OHSU, Dr. Lynn Loriaux, who was showing his young son around campus. As they were leaving the History of Medicine Room, I offered to walk them out, to show them this ghostly lettering. Dr. Loriaux says to me, "Oh, yeah, you know what that's from?" And I said that no, I didn't know, and it was driving me crazy!

Well, as we walked out to see it, Dr. Loriaux explained that in the 1990s, OHSU rented out the entire Old Library/Auditorium Building to a film crew, who used it as a hospital exterior. The sign they posted read "University Child Clinic." I asked the obvious: What was the movie called? Loriaux couldn't remember; "Must not have been very good," he said.

So, that's a reminder for me and historians out there everywhere: just because it looks old and mysterious doesn't mean it is!
Posted by Sara Piasecki at 2:47 PM No comments:

Another fascinating day here in Historical Collections & Archives, as I spent the morning at an oral history interview with Dr. Walter C. Reynolds, M.D., conducted by Dr. Ralph Crawshaw, M.D.

Regular readers of these pages might remember the name of Reynolds, after whom one of the OHSU tram cars was named back when the tramway opened in January of this year. I had also mentioned him in the context of his career as a player on the University of Oregon Medical School Medics basketball team. Today, he talked with Crawshaw about his career as a physician and his life as an African American in Portland, Oregon, once considered to be the worst city for race relations west of the Mississippi.

A modest and self-deprecating man, the 87-year-old Reynolds mentioned his father, who had only attended school through the third grade but who nevertheless had a strong commitment to education and who encouraged his children to do achieve their dreams. He talked about his older brother, who had received his master's degree in physics at the University of Washington and who always pushed Walt to do better at school when Walt wanted to concentrate on sports.

He also mentioned the high school guidance counselor who told him not to bother trying to go pre-med in college; Reynolds never talked to another counselor after that day. He talked about his anger at being denied service, at the injustices suffered by his mentor Dr. DeNorval Unthank, and at the kind of prejudice that still marks our world.

But most of all, he talked about cultural competency. For Reynolds, cultural competency begins with knowing oneself--your own background, your own prejudices, your own strengths and weaknesses. It is extended through interaction with communities: your own community, broader ethnic, racial, and religious communities, and communities across the world. He talked about the value of service work, whether in the military or the Peace Corps or a job program, work that gets young people out into communities to see how other people behave.

Reynolds stressed that this cultural competency is critical for physicians, because a good physician looks at the whole community, not just his small group of patients. I would have added that it's critical for all of us in this day and age, when genetics has shown up the fallacy of racial differences, when we all live in an increasingly global society marked by upheavals and crises that can only be surmounted by coordinated civic action.

Asked whether he thought that his acts of resistance could be called bravery, Reynolds demurred, and said only that he felt badly for those who lacked cultural competence. I feel badly for those who could not attend this morning's conversation, because we small band of listeners were certainly enriched by the experience.
Posted by Sara Piasecki at 2:27 PM 1 comment:

I've been wandering through the thickets of history again today, this time trying to track down the origin and intended meaning of the motto placed prominently above the entrance to the Old Library, current home to Historical Collections & Archives.

The meaning itself was fairly clear, given that I've taken a bit of Latin in my day. But what was the sentiment behind the words? I found the answer in, of all things, a newsletter called Scientia Medica Continuet, published by the University of Oregon Health Sciences Center Library from 1978-1981:

"Scientia Medica Continuet: May the Science of Medicine Continue" was Miss Bertha Hallam's idea which was translated into Latin by her former Latin teacher at Washington High School in Portland. The plaque with this motto was placed over the main entrance when the Library was built in 1939.

Who was this Miss Bertha Hallam? For those of you not familiar with the OHSU Library's history, here are a few facts about this "mighty mite" (she was 4'10"):

THE WOMAN:
*Bertha Brandon Hallam was director of the UOMS Library from 1918-1965 (no, that's not a typo).
*Hallam was made an honorary member of: Portland Academy of Medicine, Multnomah County Medical Society, Oregon Medical Association, UOMS Alumni Association, and UONS Alumni Association.
*In 1965, the Committee on Oregon Medical History of the OMA solicited funds for a portrait of Hallam to be painted; excess funds from that highly successful campaign were deposited into the newly created Bertha Hallam Rare Book Fund.
*Hallam's portrait was installed in the UOMS Library on March 3, 1967, the centennial of medical education in Oregon.

HALLAM'S ROLE IN BUILDING HISTORICAL COLLECTIONS & ARCHIVES:
*Hallam had been particularly interested in the history of medicine, and in the late 1930s her interest intensified. In her 1937-38 annual report she mentions getting started on building a Marcus Whitman collection and also starting a collection of the books used by students of the first session of 1887-88 as a special exhibit. These two collections exist today in the History of Medicine Room.
*Hallam built the "First Class" collection by using the list of textbooks and recommended additional books that appeared in the announcement and catalog for the School's first year, methodically acquiring each title or, if a title were already in the Library, culling it from the general circulating collection to be part of this special collection.
*In 1937, she created the PNW Archives Collection, which contains catalogs and other publications of the University from earliest years to the present, annual reports of the Medical Research Foundation of Oregon (now OHS Foundation), talks to the Medical History Club of the Medical School from the 1920s and 1930s, and hundreds of other local historical documents that are in book form (as opposed to photographs, correspondence, etc.).
*The Medical Museum Collection dates back to at least 1943, when Hallam would place ads for donations in the Service Bulletin of the OSMS.
*In 1964, Hallam oversaw the renovation of Room 300, which then became the History of Medicine Room. The Portland Academy of Medicine provided substantial funding for the renovation.

THE HOM ROOM:
The "historical division" of the Library was included in the design of the Old Library/Auditorium from the beginning of the planning in 1938. The collection was originally housed in OL Room 221 (first room on the right as you enter the Great Hall from the Auditorium). In 1964 the Medical School funded the renovation of Room 300 in order to house the historical book collection (which was not large then: between 400 and 500 volumes). Special built-in cabinets with aluminum grill fronts were installed. Furniture was moved in. This room had previously been used for storage and for School of Nursing meetings. The Portland Academy of Medicine provided funds for the purchase of special equipment for the room. The Academy also had been providing, and continued to provide, substantial funds for the purchase of historical books. On April 23, 1964, it was dedicated as the Historical Book Room.
Posted by Sara Piasecki at 12:47 PM No comments: 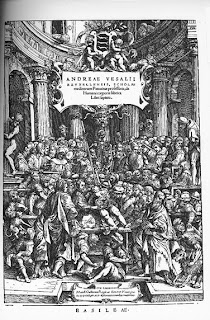 This weekend, I had a great opportunity to take the 1555 edition of Vesalius' De humani corporis fabrica out of the safe and show it off. (Shown at left is the frontispiece from our copy.)

Viewers were amazed at the resiliency of the paper, now over 450 years old. I compared it with paper from a 1930s-era collection also on display, paper which had become acidic to the point of being "single-fold," brown and difficult to read. More than any other small fact I let drop all evening, that seemed to impress one listener above all else. I think I managed to convince him to always, henceforth, look for the small infinity symbol on the title page verso of books he buys, to remind himself that the choices we make today may maintain our information resources for centuries, or doom them to quick extinction.
Posted by Sara Piasecki at 11:52 AM No comments: