Dr. Sima Desai delivered part two of her history of women in medicine talk to the first-year medical students this afternoon (see last week for part I). We heard about the businessman William Mullen, himself a failed medical student, who founded the Female Medical College of Philadelphia.

While the school would eventually go on to accept female students from twenty countries and almost all of the United States, the first class was comprised of only eight women seeking medical degrees (thirty-two more women attended classes as "listeners"). One of those eight was Ann Preston, who would go on to become the first female dean of a medical school. (No small feat, considering that to this day, there have only been four female deans of American medical schools.)

Desai also talked about Mary Putnam Jacobi (scion of the Putnam publishing family and future wife of Dr. Abraham Jacobi) who graduated from the Women's Medical College in 1864 before going on to become the first woman accepted into the Ecole de medecine in Paris in 1868. She won the Boylston Medical Prize in 1876; her anonymous entry on the topic of whether women needed to rest during menstruation and if so, to what extent, summarized the responses from hundreds of questionnaires she sent out to women in various occupations. When she died in 1905, none other than Dr. William Osler described Putnam as having a "heliotropic potency."

This two-part presentation on the history of women in medicine dovetails nicely into next week's lecture on Esther Pohl Lovejoy, M.D., an alumna of the University of Oregon Medical School and a physician of notable achievement. The lecture is free and open to the public.

In memoriam Robert A. Campbell, M.D.

Reading this morning's paper, I was shocked to see an obituary notice for Dr. Robert A. Campbell, M.D., former professor of pediatrics here at OHSU. A specialist in pediatric nephrology, Dr. Campbell was also Santa to patients in Doernbecher Memorial Hospital for almost 20 years.

I had occasion to speak with Dr. Campbell just last month. One of our oral history interviewees, he had called to see whether he could get a replacement for his copy of the interview, which he had loaned to a friend who had never returned it. Of course, we happily sent him three additional copies. It was a memorable call, though: I picked up my ringing phone and was greeted with a rather loud voice declaring "This is Dr. Robert A. Campbell. Who is this?" (He had called me, but, I guess you never really know who'll pick up a phone...)

We went on to have a lovely conversation about my last name, which he correctly pegged as Polish, and about his Czech wife, whose maiden name was Muchka. (Mucha in Polish means 'fly.') After he finally got down to business and we discussed the replacement copies of the interview, he suddenly asked me: "How old are you?" When I told him, he said, "I thought so. You're very flirtatious. Goodbye!" and promptly hung up.

I'm pretty sure no one has ever called me flirtatious (I'm a librarian.) But it was one of the more entertaining calls I've gotten recently, and it certainly endeared Dr. Campbell to me. I am saddened to hear of his death.
Posted by Sara Piasecki at 7:12 AM 3 comments: Links to this post

In the third oral history interview conducted last year, OHSU Emeritus Professor Barbara Gaines sat down with outgoing School of Nursing Dean and OHSU Vice President Kathleen Potempa to talk about Potempa's tenure at OHSU and her views on nursing education and leadership. A particularly interesting section of the interview concerns Potempa's work with the Oregon Nursing Leadership Council and the resulting development of the Oregon Consortium for Nursing Education. Her comments certainly reach beyond nursing and are, I think, applicable to many problems in our modern world:

GAINES: ... You know, one piece from the—you wrote a fascinating article in Nursing Administration Quarterly looking at your experience through this process in terms of how to move folks out of their own houses, as you say. And you talk a bit about our kind of parochial view of leadership within nursing. And some other comments that you’ve made that I found fascinating would look at how, in fact—or perhaps this is correct, how in fact the OCNE program and the work that you all did as groups who sort of came siloed to the meetings initially, and have moved, have helped us deal with the issue of the entry question. Which just buries this country as far as nursing practice. And I wonder if you’d say just a bit more for us about your experience and what it’s done to your philosophy of leadership. Or what it’s meant to your philosophy of leadership. Or vice versa.

POTEMPA: Well, it was, the article was really based on some theories of group relations. So it came from that theoretical framework. And it really comes from the notion of co-creation of ideas and co-development of ideas. And one of the things that happens when you come to things from a siloed perspective is everyone is absolutely convinced that their view of the world is the correct one. And that if you compromise, it lessens the effectiveness of your capacity, the effectiveness of your opinions. And getting past that, and reducing the barriers and the boundaries between the groups, so that they can be open to hearing the potential of the other view, is part of the leadership process that led us to being able to see the world a little differently. And in that process, redefine the situation. I think part of the definition was what evoked the kinds of strong, passionate, opposing views, simply because the words kept people in an old place, in an entrenched place. And so we learned through listening to one other to completely redefine a situation in a way that opened up the boundaries, and opened up the lines of communication.

But wayfaring through that initially, we had to learn what the words really meant. Like “entry into practice.” And it was deeply entrenched and had deep and layered meanings. And so we had to get to all of that.

And then, through that process of focusing in on ourselves, we were able to realize in almost a short minute that it isn’t about us at all. And that by staying in that view, and by being in that way that we were, we weren’t achieving, none of us—baccalaureate, associate’s degree—were meeting our mission, really. Because we were focusing in on the wrong things. So we said, we have to think about this differently. And to do it, we have to do it from the ground up. As a process of co-inquiry. In other words, all of us would take a ground-up exploration, being completely open to the conclusions that we would draw from that exploration. And that’s when we began the process of looking at the data. This was about the people we served. It wasn’t about our entrenched view of how we came to be nurses and who was better. We came to the conclusion that none of us were doing it the way the future required of us.

But getting through those barriers was part of the initial work, and the parochialism that comes from a siloed perspective. And it’s really a metaphor for, or a microcosm, if you will, of what can happen in healthcare, when various professional groups come from only their entrenched view. Such as physicians. I don’t want to cast them into a stereotype. But if a physician, for example, believes that the most important thing is the differential diagnosis, that’s very different than the view that nurses hold, and it’s very different than the view the patient holds. And to get past all that, in terms of what’s driving healthcare, you have to open up the boundaries and the communication. And all of us have to remember that it’s the patient’s view that we have to remember as well. So it’s a similar process that can be carried to different situations.

Posted by Sara Piasecki at 8:11 AM No comments: Links to this post 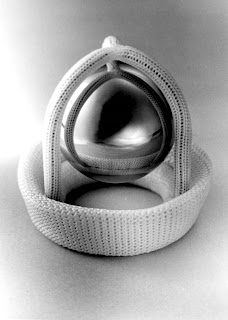 Now full processed and waiting for cataloging, and soon to be available for checkout from the Main Library, is the oral history interview with Dr. Albert Starr, co-developer of the Starr-Edwards heart valve. Starr was interviewed in February of 2006 by OHSU trauma surgeon Dr. Richard J. Mullins. Surgeon to surgeon, the two talked about the experience of performing a type of surgery that no one has ever performed before:

MULLINS: I’d like to discuss what it was like as the surgeon doing operations that you can’t read about in a book and finding something that is unexpected. You must have had that happen. Was that stressful?

STARR: Yes. In a word, yes, it was quite stressful. But it was a kind of stress that’s exciting stress. I mean, we—your own life is not on the line, so it’s a different kind of stress than the stress I experienced in Korea, for example. It’s more of an intellectual stress, trying to figure out—you know, nature’s out to get you, so how can I get around it. It’s that kind of feeling. It’s more like a game stress than it is a war stress or a personal issue in your own personal life.

MULLINS: Is this where your training with Dr.—was it Chambers?

STARR: Yes, it was. Chamberlain was a very cerebral, very physical engineering-type mind. There’s a project, and let’s do it fast, but also elegant. It had a flow, it was like a ballet. One thing had to lead logically into another; no horsing around, just very methodical, logical, and elegant.

MULLINS: So did you just have to teach yourself how to put the sutures in the ring, the annulus?

MULLINS: Not too deep and not too…

STARR: Yes, all those things. The animal experience was very valuable. The humans were easy compared to the animals.

Posted by Sara Piasecki at 8:37 AM No comments: Links to this post