History of women in medicine, Part I

Today's history of medicine lecture for the first-year medical students was Part I of Dr. Sima Desai's two-part presentation on the history of women in medicine.

Dr. Desai delivered the brief outline of this history up to the nineteenth century in broad strokes, moving from the Sumerians (women as natural healers) to the Middle Ages (inferiority of women, witch hunts for female practitioners) to the Victorian era (extreme prudery leading to a severe decline in the practice of women's health). By the 19th century, industrialization and increasing poverty brought women back into the medical arena, as they took the lead in matters of public health, sanitation, and hygiene.

Nineteenth-century American medicine was not the professionalized sphere we know today; in fact, it was often thought that if you couldn't practice any other profession, medicine was a good trade to go into. Apprenticeships, along with short courses of formal training at medical schools, were the only requirements for licensed physicians. Still, a woman was considered completely unsuited to this field of study, and Elizabeth Blackwell was turned down by sixteen medical schools until the Geneva Medical College finally accepted her in 1847. When she received her degree in 1849, she became the first American women to graduate from medical school.

Having opened a door into medicine for herself, she saw it close tightly behind her. Geneva Medical College turned down their second female applicant, noting that Ms. Blackwell's admission had been an experiment, not a precedent.

The OHSU Library, in cooperation with the Multnomah County Library, will be hosting the traveling exhibit "Changing the Face of Medicine: Celebrating America's Women Physicians" in June 2008. If you're interested in learning more about the history of women in American medicine before then, check out the virtual exhibit from the National Library of Medicine. Be sure to look for University of Oregon Medical School alumnae Esther Pohl Lovejoy and Marie Equi, as well as former OHSU School of Medicine Dean Christine Cassel.
Posted by Sara Piasecki at 1:32 PM 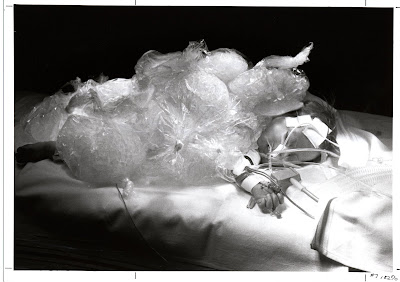 I came across this photo late yesterday afternoon, in the unprocessed remains of the large image donation we received from OHSU News & Publications in January. There is a caption on the back: "11/87. A 3-month-old infant undergoing surface cooling prior to repair of a complex congenital heart defect." Induced hypothermia is a common technique for cardiac surgical procedures.
Posted by Sara Piasecki at 7:46 AM

For those who cannot come in person to the OHSU Marquam Hill campus, the online component of our new exhibit is now available! 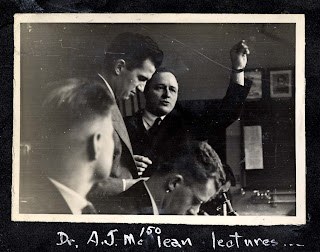 A Return from Oblivion:
Portland's first neurosurgeon, A.J. McLean
Created by Archivist Karen Peterson, the display showcases the brief but brilliant career of this controversial character.

A graduate of Reed College, A.J. McLean received his M.D. from Johns Hopkins and his neurosurgical training at Peter Bent Brigham Hospital with the specialty's founding father, Harvey Cushing. After a fellowship in Breslau, Germany, with prominent neurosurgeon Otfried Foerster, McLean returned to Portland where he opened a private practice and joined the faculty of the University of Oregon Medical School. Brash, disrespectful and hot-headed, he gained admirers as well as detractors. When he died in a car accident in December of 1938 (which some claimed was suicide), he left a will that gained national attention for its somewhat unusual clauses: "...To 95 percent of Portland's medical practitioners and their ethics, and the whole local organized medical profession, a lusty, rousing belch. To Portland's thieving patients, the haphazard care they will receive for their chiseling tawdriness....To my name, oblivion."

After seventy years of getting his wish, McLean is being resurrected. Witness his return, and get a glimpse of the motivations and ambitions of this enigmatic man.
Posted by Sara Piasecki at 1:02 PM

We here in Historical Collections & Archives often refer to our little realm in decidedly regal terms, since we consider it (rightly or wrongly) the jewel in the library crown; heck, we even have dominion over something called the North Tower, which is a suitable space for any Rapunzel (though she'd have a hard time fitting in there, what with the piles of empty document boxes and reams of archival paper). It's easy to get caught up in this ivory-tower atmosphere and forget that we do not operate in a vacuum. Blogging was at first very supportive of this sense of quiet and separation, but now it's actually a helpful reminder that WE ARE NOT ALONE, as it were.

A thoughtful and well-written post by Erik Moore at the University of Minnesota Academic Health Center Archive helps articulate some thoughts I, and surely others, have had about the changes taking place not only in archives and libraries but also in various scholarly disciplines. Moore frames his remarks in archival terms, which is helpful for an archival duffer like myself: "survival-oriented" archives, provenance at the "macro-level."

We here at HC&A have been engaged in a delicate dance between stewardship and ownership, control and cooperation, since I first arrived. It started with a name change, from OHSU Library Archives (which everyone assumed meant we were the archives for the library exclusively) to our new moniker, which was intended to broaden our scope across the schools, centers, and units at OHSU. Then came increased access to the collections, whether processed or not, to get researchers interested. With increased outreach, we received increased attention. Donations of materials came in, sure, but so did questions from groups and individuals who wanted advice on how best to maintain the records in their possession.

Were we truly greedy, every one of these conversations would have ended with me trying to convince someone else to give us their stuff. Luckily, our storage limitations have been a check on my avarice. We now routinely advise folks on the proper storage and handling of materials, refer them to appraisers, or try to point them to other sources of information--even (gasp!) to other repositories which might be better suited to their proffered donation.

In the end, this serves us more than I could ever have imagined. We are developing networks of interested individuals, learning about resources that exist out there in the community, and fostering a bit of goodwill in the process. And it helps the community: the long-term survival of records cannot be predicated on the actions of formal repositories alone. If we truly hope to see information preserved for future use, we need to extend our reach well beyond our own walls.

As a favorite comic of mine once said: "You can't have everything. Where would you put it?"
Posted by Sara Piasecki at 12:50 PM

Since I have recently been discussing the new medicinal uses for our old friends intestinal parasites and leeches, I feel compelled to share this great post from The Examining Room of Dr. Charles on maggot art. Yes, art by maggots. So, artists and medical wonders: leeches need to come up with something pretty substantial to top that...
Posted by Sara Piasecki at 3:17 PM

Working my way through a list of potential interview candidates for the OHSU Oral History Program, I came across a notice of the death of Donald E. Pickering, M.D., former professor of pediatrics here at the University of Oregon Medical School and first director of the Oregon Regional Primate Research Center. Pickering apparently passed away in Seattle, WA, on July 19, 2006, aged 83.

I first heard Pickering's name shortly after I started work here as History of Medicine Librarian in 2003, as I was processing a previously recorded oral history interview; his name shall ever be linked in my mind with the phrase used by that oral history interviewee: "The Pickering Debacle," it was called, and whatever it was (I didn't know at the time), it sure didn't sound good.

When Pickering came to UOMS in in the 1957, he was only the second Markle Scholar to come to the university (the first, John E. Harris, went on to join the faculty at the University of Minnesota Medical School). When UOMS and the Medical Research Foundation were granted funding to build the Primate Center in 1960, Pickering was selected to be its first director. In 1962, when members of the National Science Advisory Council came to assess the Center's progress, they "were full of praise" for Pickering, noting that "he already has earned a reputation both as a scientist and as an administrator" (Oregon Journal, Dec. 11, 1962).

But the honeymoon would soon be over. On January 5, 1963, Pickering resigned his post, citing a "lack of communication" with the MRF and Dean David W.E. Baird, which had "created insurmountable difficulties to the orderly growth" of the Center (Oregonian, Jan. 6, 1963). Dr. E.S. West, co-principal investigator on the Primate Center grant, was named acting director.

It appeared that Pickering had the support of his staff: an article in the Portland Reporter (Jan. 11, 1963) said that "Intercession by Gov. Mark Hatfield in the supplanting of Dr. Donald Pickering as director ... has been requested by 101 of the 120 scientists and supporting personnel at the center." Hatfield refused to get involved directly, only noting that he hoped a deal could be worked out whereby Pickering could stay on at the Center. Pickering had, in fact, intended to stay on as scientist and co-principal investigator, merely giving up his role as director; but by late January he told the media that "an attempt has been made to relieve him of his other duties at the center"--a move he initially refused to recognize.

By August, however, it was clear that it was time to go; Pickering left Oregon that month to join the Delta Regional Primate Center at Tulane University.

We never will get a chance to hear Dr. Pickering's side of the story, but others have been willing to share their impressions of the whole affair. If you're interested in hearing some subjective analyses, check out the oral history interviews which mention Pickering.
Posted by Sara Piasecki at 2:42 PM