We received a special gift in the mail today from a conscientious citizen in Bellevue, Washington. The box contained four glass lantern slides, all bearing property stickers from the University of Oregon Medical School.

Our donor had picked these up years ago at a garage sale, captivated (as many of us are) by the inherent beauty of this style of image presentation. This year, seeking to deposit them in a good home, she contacted the University of Oregon, who referred her to us, and voila! Four more lantern slides for our collections.

Cut to the chase--what do they depict! you cry.

Unfortunately, they aren't long-lost shots of the interior of Katherine Hall, or candids from the horseshoe pit showing Dr. West besting Dr. Allen. But they're pretty cool:
This last is interesting. It bears no label (outside our property label), and is a bit dirtier or more corroded than the rest of the slides. It's clearly a child, given the size of the head in relation to the rest of the skeleton. Certainly, this image would have been a powerful example of the utility of x-rays in forensic medicine (or archeology, but I'm not sure that would have been the audience for a UOMS lecture). Thinking that it is, perhaps, a famous child mummy, I did Google image and Wikimedia searches--nothing similar located, but lesson learned: "child coffin" is not a good image search to conduct.

The way I see it, the Victor sales rep came to campus for a sales pitch and brought along a visual presentation of the new machine on offer. Maybe the faculty liked what they saw, maybe they even bought one--and the rep threw the slides in free of charge, so we could spread the good word to other medical sites in Oregon and beyond. Apparently, we got at least as far as Bellevue, WA!
Posted by Sara Piasecki at 2:08 PM No comments:

Strange disappearance of the surgical amphitheater

An historic photograph of the old surgical amphitheater in Multnomah County Hospital (later called OHSU Hospital North) has wandered off from an office here on campus, and it just so happens that it's the same image that was used in the recently-installed Story Wall. Luckily, a sharp-eyed member of the staff in the aforementioned office recognized it there, and by a circuitous route, got in touch with us here in Historical Collections & Archives. While we can't help locate the missing item, we can easily provide the original image for enlargement and printing.

In the photo, surgical staff fill the tiered seats surrounding the surgical theater proper, some using their binoculars for close-in viewing of the procedure. We actually have several similar photos, some with seats full of nursing students, some with medical students, one showing surgeon Dr. Dean Seabrook lecturing to a crowd.

Medicine as spectator sport. Hopefully, the replacement photograph will not become another victim of the contact sport of theft!
Posted by Sara Piasecki at 1:35 PM No comments:

Two shuffles forward, one step back

As I look back on the activities of the past few days, I see that there is still a whole lot of shuffling going on in our collections. Even though we've been engaged in concerted organizational efforts for some years now, there are still vestiges here and there of old systems, or perhaps they are pre-system fossils, which jump out at me periodically from their resting places.

Take the Vertical Files: when they were formally established, no one knows. Generally, as we've seen, they contain ephemeral material about non-OHSU personalities. We have seen how some important pamphlets were tucked in there, when they should have been cataloged (and I did find another Osler pamphlet in there yesterday, this one a short biography of the pathologist Alfred Stille, held by only three libraries in WorldCat). Was this done during a time when there was no full-time cataloger on staff? Whatever the reason, now we remedy the problem by pulling the item to be cataloged and made available to bibliographic utilities.

An example of the opposite case came across my field of view this morning: looking to see what we had in the History of Medicine Collection by or about Robert Carswell, I saw that we had cataloged a collection of "miscellaneous xeroxed material, including portrait and biographical data and six articles." To me, this packet screams Vertical File. Was this cataloged before the Vertical Files had been established? Certainly, we can free up a little of the very valuable shelf space in the HOM Collection by removing this to the Vertical Files, and so we shall.

Additionally, the Historical Image Collection holds some clear Vertical File candidates. Today, filing some of the new (and newly processed) photographs from a recent donation from OHSU News & Publications, I grabbed a magazine cover depicting Elizabeth Blackwell and two copies of a reproduction of a portrait painting of Archibald Menzies for transfer.

All in all, these small operations do tend to slow the general pace of activity, but they are a necessary and important part of what we do on a daily basis: imposing some sort of order on our materials to make them more useful for future researchers. While some (such as David Weinberger in his new book Everything is Miscellaneous) would argue against the utility of organizational schemes, it seems, frankly, ridiculous to throw our hands and our materials up in the air, to let them fall where they may and expect anyone to find anything useful. Serendipity is good, but rummaging around for lost items will take you more than one step back!
Posted by Sara Piasecki at 1:56 PM No comments:

Imitation is the sincerest form of flattery 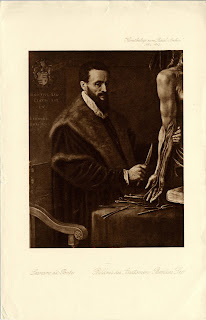 When I saw this image in the Vertical Files on Friday, I thought to myself: I've seen that image! That's Vesalius! Isn't it? Looks pretty similar to the portrait of Vesalius in the Fabrica .... But the caption below the portrait reads: Leandro da Ponte, Bildnis des Anatomen Bontius Leo.

This image had been filed in the Vertical Files under Leandro da Ponte. Well, it was pretty clear from the caption that da Ponte is the artist (one of the Bassanos, as it turns out). But who was this Bontius Leo? An odd name: maybe it was really Leo Bontius?


Ah, Google: so revered, so insidious--are you able to tell me anything about Bontius Leo? No, you aren't. However, the Library of Congress Authority Files, which list known name variants for thousands of authors, illustrators, and other creators, comes to the rescue: Bontius Leo, also known as Boncius, is mentioned in Girolamo Capivaccio's 1599 Medicina practica. Unfortunately, at the time that the cataloger established this authority for Leo, no further information about the anatomist was available in any of the standard reference sources (BN; Wellcome; Ferrari; Cosenza; BM; Renzi; Surg. Gen.’s cat.).

While Leo apparently hoped to become as famous as Vesalius, commissioning this look-alike portrait to instill the connection in the minds of viewers, he seems to have been forgotten. We will await the curious researcher, who can ferret out the details of Leo's life and truly compare his achievements with those of Vesalius....
Posted by Sara Piasecki at 7:58 AM No comments: