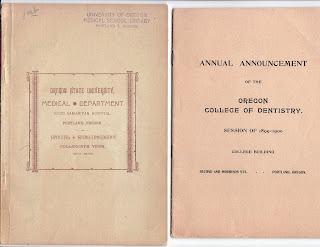 New Year's Eve: time to reflect back on the year just past and look forward to the year ahead. This eve finds us on the cusp of two anniversaries:

1887-2007: 120th anniversary of the OHSU School of Medicine
As we have noted a few times over the past twelve months, 2007 was the 120th anniversary of the School of Medicine. The first annual announcement and catalog advertised a medical school operating under the administrative aegis of the Oregon State University and physically located at Good Samaritan Hospital; it listed three "regular sessions" (of six months each) as requirement for graduation; and it noted that one ticket for a "full course of lectures" cost $120. Current information on admissions for the OHSU School of Medicine indicates that for over 4,000 applications received, only 120 students are admitted per year; those students can expect to pay between $8000-12,000 for a single term.

1898-2008: 110th anniversary of the OHSU School of Dentistry
In December of 1898, the Oregon College of Dentistry was incorporated as a "high grade dental school, in the metropolis of the North West," according to the first printed announcement from the 1899-1900 session. Like the medical school, the dental school required three sessions (of seven months each) to be completed. Tickets for dental lectures were only slightly less expensive (at $100 apiece). Even the staff would have seemed familiar: Holt C. Wilson, Ernest F. Tucker, Otto S. Binswanger, Robert C. Yenney, and Edward P. Geary, all held joint appointments at the OCD and UOMS during the 1899-1900 session. It would only take another 46 years before the two schools were administratively joined as equal schools within the University of Oregon, and 19 more years before the dental, medical, and nursing schools coalesced into the University of Oregon Health Sciences Center. Seems fast when you look at it that way, doesn't it?

Stay tuned for more history of the School of Dentistry as we tick off the days until 2009.