One of a thousand words 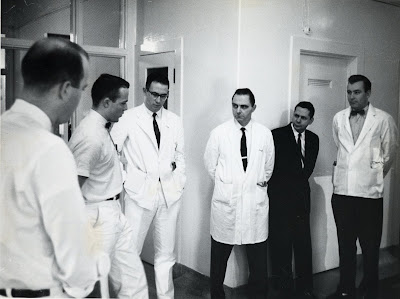 So pictures, as the saying goes, are worth a thousand words each. The question when systematically classifying photographs into a flat file then becomes: which word is most important? The problem is, of course, that different words are important to different classifiers and different searchers at different times.

Take, for example, the photograph I came across today when looking for a picture of our former chair of surgery, William Krippaehne, M.D., as an intern or resident here at the Multnomah County Hospital. He graduated in 1946, so his internship and residency years would have been in the second half of that decade. We have two classes of intern and resident photos: one for those groups we know were at MCH, and one for those of indeterminate location (could be the Portland VA, could be Good Samaritan, Emanuel, St. Vincent's--you get the idea).

We have several undated group photos of the MCH interns from the 1940s and 1950s; I'll have to look those over more carefully to see if I can pick Dr. Krippaehne out of the crowd. And even though we know he interned at MCH, I checked the other folder to see if something was filed incorrectly at some point.

Lo! and behold! In the miscellaneous Residents & Interns folder, there were two photographs of Dr. Krippaehne and Dr. Stanley Jacob, another member of the surgical faculty here, leading a group of medical students in rounds. What a find! We don't really have that many images of William Krippaehne, and this shows him in his element of academic medicine.

So, today's lesson: classification is good and important and useful, and it should be done carefully and thoughtfully. But serendipity is a researcher's best friend!
Posted by Sara Piasecki at 2:24 PM