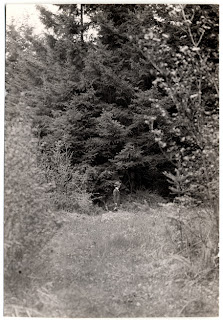 Since 2007 marks the 120th anniversary of the university, it seems that every day is a new opportunity for me to return to the very roots of this place for inspiration. Today, the idea of roots has sprung into life with this image, scanned for a proposed upcoming project (about which more later, if the proposal is accepted!).

Here we see faculty member Dr. William Fitch Allen, known by all as "Pop," standing on Marquam Road, in the clearing that was to become the location for the first building here on our hilltop campus. In 1918, ground was broken for the Medical Science Building, later rededicated as Mackenzie Hall in honor of our second Dean, whose vision made this forested piece of land into a thriving medical center.

And what I said yesterday, about preserving greenspace? I guess we have done a little deforesting in our day, after all!

Posted by Sara Piasecki at 1:13 PM No comments: 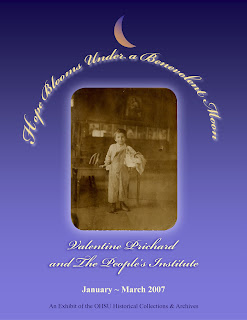 As I hinted at on Friday last, we had a changing of the exhibits this week. As of yesterday afternoon, the new exhibit Hope Blooms Under a Benevolent Moon: Valentine Prichard and the People's Institute is now on display in the lobby of the Main Library here on Marquam Hill. For those who are in town and able to come in person, the physical exhibit will be up through the end of March. The exhibit, unlike the History of Medicine Room, is open evenings and weekends, whenever the Main Library is open--so come check it out!

For those of you who cannot make it up the Hill, the full text of the brochure, along with some of the images from the exhibit, will soon be available on our web site. (Or, for an even more abbreviated version, see the What's New article.)

The more we've learned about the history of the People's Institute--(which officially became affiliated with the then-University of Oregon Medical School in 1910, growing in time to become the OHSU Outpatient Clinic)--the more it appears that its history mirrors the ever-enduring missions of
OHSU: universal access to healthcare; community outreach; outstanding clinical education for students. The Institute espoused cutting-edge ideas about whole-body wellness, the same ideas now embodied in OHSU's new waterfront facility march wellness. Its involvement with the development of Portland's public parks was a foreshadowing of OHSU's recent activities in developing Marquam Hill nature trails and safeguarding green space by donating 45 acres to the city.

A cynic (and granted, I've been known to be one) might say that this is simply evidence that there's nothing new under the sun. I prefer to think that this is evidence of our auspicious beginnings, of our continued commitment to the principles laid out by the founders, and of our ability to continue to focus on the important things, even in the face of economic challenges and physical constraints. I hope I'm right!

I encourage you to look at the exhibit and judge for yourself. As an added bonus, note that the exhibit will be up for February 14--so come and get a Valentine!
Posted by Sara Piasecki at 2:28 PM No comments:

The University of Michigan School of Dentistry has added a new star to the universe of the web: Dental Cosmos, the first real American dental journal, has now been completely digitized and placed online. The entire journal run, from its inception in 1859 until its 1936 merger with the Journal of the American Dental Association, can be freely accessed by anyone interested in the history of dentistry. What's more: the issues are all keyword searchable, allowing a researcher to gather all the relevant journal articles on, for example, crowns, or all the mentions of G.V. Black. While the display of the issue list is a little confusing (being, for some reason, out of any chronological order), the site makes up for its shortcomings with lovely digital images taken straight out of the journal.

The announcement from Michigan notes that "Dental Cosmos was considered the source of information for practitioners for more than 70 years. It began as a publication designed to encourage dentists to use the products manufactured by the magazine's founder, the Samuel S. White Dental Manufacturing Company. In time, it became the first enduring national journal for the American dental profession and one of the most significant in the early history of American dentistry."

The popularity of the OHSU Library's complete print run of this journal is clear evidence that the journal continues to inform researchers; the newly available online version will greatly aid local scholars, who until now had to wait for issues to be brought up from the Library's off-site storage facility.

While material of this antiquity is, by law, in the public domain, University of Michigan is asking that researchers contact them for permission to reprint. Let's all try to keep our new year's resolutions to comply with copyright!

We received a great shot of Mackenzie Hall in last week's donation from News & Publications that shows an innovative approach to the problem of having signage ready when you are: a lovely cloth banner was draped from the roof of Mac Hall to cover the (still-present!) words "University of Oregon Medical School."

In the Proof Collection, we have very artistic shots of the newly-branded badges that Security officers started carrying in 1981 after the change--certainly, one of the items most people wouldn't consider when making a name change, but one of the more important pieces to get right!

Of course, even if you don't change monikers, you can change your look--which OHSU did in the past few months with the unveiling of the new institutional logo. While you'll see the new flame throughout OHSU web site, you can still look in the Digital Resources Library for the retired image. Yes, Virginia, we do save everything!

Posted by Sara Piasecki at 12:06 PM No comments: