New equipment for the new year 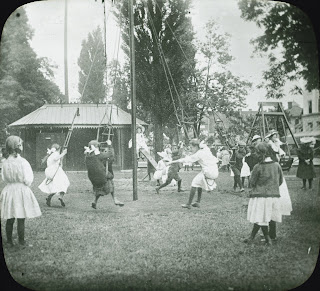 Well, too late for Christmas, Hanukah, or Kwanzaa, but just in time for the New Year, we received our shipment of a new transparency hood for our Epson flatbed scanner. With this accessory, we will now be able to scan anything transparent: glass lantern slides, 35mm slides, transparencies. So, look forward to seeing some of our oldest (in the case of glass lantern) and newest (in the case of 35mm) images online in the coming year. In the meantime, enjoy this digitized image of one of the glass lantern slides from our collection, provided by OHSU Medical Photography. This picture, from the People's Institute Slide Collection (Accession 1999-010), shows Portland's first public park. Originally begun by the Institute in 1906, the parks were turned over to the city's Park Board in 1909. The Institute went on to become the OHSU Outpatient Clinic, still in operation today.

Several events today have caused me to look back on the history of this place, all the way back to the very beginnings in the 19th century, and wonder (aloud, actually) about the convoluted path that has been taken. While every institution would like to represent its history as an unhindered march toward progress, the historical record keeps alive the memories of those hiccups (or coughs, or tumults) that some would just as soon forget.

I received an advance copy of a piece being written by one of our researchers, and one of his footnotes led me to read a 1974 article on the history of OHSU: "University of Oregon Medical School," Western Journal of Medicine, 120:255-262, Mar 1974). Written by Thelma Wilson, then Assistant Director of Public Affairs here, it is actually a pretty well-balanced account of the first 86 years. On page 260, we read that Dr. Richard Dillehunt was elected to the deanship of the Medical School "only after an intensive battle between two factions of the faculty. The majority of the older clinical members considered the laboratory sciences as merely a necessary adjunct for training physicians. The younger clinical men and the laboratory staff believed equally strongly that medical education must be primarily a science. Dean Dillehunt was destined to walk a tightrope between the two factions until each recognized the importance of the other's role." I wonder when, exactly, that occurred....

So, since Wilson did not cite a source for this tidbit (she seems to have obtained many of her facts from talking with retired faculty members), I went up to check the original Faculty Minutes (Accession 1999-003). I suppose I should have known better than to expect to see anything truly revelatory in the "official" minutes. But the first volume is a lovely example of just how complex primary sources can be. Minutes were originally taken in longhand at the meeting, whether in pencil or ink. Sometimes, these minutes have been left to stand as written. Other meetings, however, must have remained controversial after the session ended. Typed minutes are pasted over manuscript minutes; whole pages have been glued together around the edges, leaving just enough room for someone to get a tantalizing peek inside.

The minutes for March 30, 1920, have been left in the longhand taken at the time. But it's clear that much was left out. The naming of a new dean is the only agenda item. The minutes begin: "Dr Labbe discusses importance of selection of proper dean because of great public interest in the school and because representations [sic] of Rockefeller Institute are about to arrive in city for purpose of investigating med school."

Dillehunt was a good choice, since he had been acting as assistant dean since 1912. Curiously, on p. 158 of the minutes, there is a manuscript note (later crossed out) that "Assistant dean presents resignation--not accepted by vote." The person who crossed this out points the reader to pp. 152-153, where we find typed minutes of the Nov. 11, 1916, meeting, but no mention of Dillehunt's resignation attempt. Also no mention of the small item I can see between pp. 156-157 (glued together) which reads, in part: "Move Benson and 2nd matter of students alleged to have performed abortion be investigated by committee of 3 [...]"

Definitely some leads to be followed here, for a researcher interested in the side roads on our march to progress!
Posted by Sara Piasecki at 12:30 PM No comments:

Yesterday was Boxing Day (and, by the by, the start of Kwanzaa), and I thought I would share with you the contents of one box I received over the holiday weekend. My sister, a cost accountant for medical device manufacturer Micrus Endovascular, obtained for me a MicruSphere MicroCoil (platinum, 3 mm x 5.4 cm). Fear not, gentle reader: I have no intention of using it on anyone, especially since it bears large stickers reading "Not for human use, non sterile" and a tiny printed disclaimer reading "Federal (U.S.A.) law restricts this device to use by or on the order of a licensed physician."

The instructions--which come printed in English, French, German, Japanese, Spanish, Chinese, Italian, Portuguese, Dutch, Czech, Greek, Hungarian, Polish, Swedish, and Turkish--nicely sum up that "Micrus MicroCoil Systems are intended for endovascular embolization of intracranial aneurysms." A diagram of a properly laid out saline flush system is included in the system preparation notes, and sixteen photographs illustrate each step of the process of opening, seating, inserting, and retracting the MicroCoil.

It's amazing to see how far neurosurgery has advanced since the death of Harvey Cushing in 1939. It has only been in the past 20-30 years that brain aneurysms have been treated without invasive surgery, and it's wonderful to imagine where we might be in another decade or two. That box might take up even less room under my tree!
Posted by Sara Piasecki at 8:07 AM No comments: