[This is a bit of a bonus posting, since I'm actually out of the office today. But I couldn't pass up this opportunity!]

Saturday, September 30, is the 16th annual John Raaf Day in the Department of Neurological Surgery here at OHSU. The annual lecture will this year be given by Dr. Edward R. Laws, Jr.--who will be actually giving two talks on management of malignant glioma and diagnosis and management of pituitary tumors.

Dr. John Raaf, whom the department website calls "the father of neurosurgery in Oregon," was actually the second trained neurosurgeon in the state, after the infamous Dr. A.J. McLean (see our earlier posts for more on McLean). There's no doubt that Raaf was a far more influential figure than McLean, and his accomplishments have had more far-reaching effects. When he passed away in 2000, the School published a rather lengthy obituary that can still be read in the news archive. Here, you'll read about the man and the doctor, the fisherman and boxer. But only in the Biographical Files here at HC&A will you learn that he and his wife spent their wedding day at the first annual meeting of the American Academy of Neurological Surgery--and their 11th wedding anniversary at the same conference.

Behind every great man...
Posted by Sara Piasecki at 2:20 PM

The recent flurry of research activity around graduates of the University of Oregon Medical School in the years 1894 and 1895 reminds me that the human curiosity is vast and that information is timeless--provided you preserve it.

What will researchers 110 or more years from now know about OHSU today? Well, since we don't have a mandate to receive administrative papers from OHSU departments and units, we need to work a little extra hard to be able to ensure some context for events. This week, I have printed onto acid free paper, sorted, and housed (among other things):
I think this was the first week in a long time that we didn't add to our file on the tram...

As always, we welcome donations of material related to OHSU or to the practice of the health sciences in the Pacific Northwest generally--we can't possibly gather it all ourselves!

Posted by Sara Piasecki at 1:04 PM 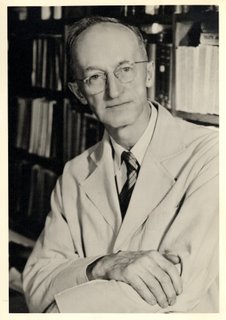 A short while ago, looking through our Biographical File on former faculty member and longtime professor of anatomy Dr. William F. Allen (left, whom everyone called Pop), I ran across a lovely letter from Dr. W.K. Livingston to Allen's widow, written shortly after Allen died in March of 1951. Livingston was then Chair of the Department of Surgery here at UOMS. The letter, dated April 3, 1951, reads:

I just wanted to tell you how much I miss William. I was sick in bed with the flu at the time of his last illness and the funeral. However, I saw him on the Sunday before he went to the hospital. He was working as usual all alone, carrying on his faithful research. He will always represent for me the true research worker with a meticulous attention to detail and the many, many repetitions of his tests to assure the soundness of his conclusions.

I think you know something of my respect and affection for him. Bill Murphy and I were the first ones to work in his laboratory the summer that he came to Oregon. I know you will remember, too, that he loaned me money to go to Harvard Medical School when I had almost no way of assuring this loan. Since I came back to teach in the medical school, my affection has increased. There was often a lump in my throat when I peeked into his soundproof room and heard him talking to his dogs or saw him bending over that little old-fashioned typewriter, but it was very hard to express this affection and I think William was embarrassed by my attempts to do so. He would prefer a story instead.

On the last Sunday that I saw him at school, he told me that he was having some trouble with his stomach and the fear came to me then that perhaps this was more serious than either of us knew. I am so glad that he was not ill long and that he was able to carry on his work uninterruptedly through the many years. If there is ever anything I can do for you or yours, it would give me great pleasure to do it since this would be one way of expressing the filial devotion which I had toward him. Don't try to answer this letter. I just wanted you to know of my sympathy and how much I miss him.

Yours sincerely, W.K. Livingston, M.D., Professor of Surgery"
Posted by Sara Piasecki at 9:58 AM

Controversy over fertility treatments and their by-products is a feature of contemporary society; certainly, the OHSU Fertility Clinic has been much in the local news of late. Medical topics in reproductive health and sexuality are often touchy subjects, and few treatments are as emotionally and culturally charged as sex change operations. One of the earliest recorded instances of a sex change operation in America was actually performed here at the University of Oregon Medical School.

Alberta Lucille Hart, UOMS graduate of the class of 1917, was reared as a girl but always considered himself a male. The year s/he graduated, Hart persuaded Dr. J. Allen Gilbert, then Assistant Professor of Medicine, to recommend a total hysterectomy. Gilbert was leery of such a radical surgery, and Hart supplied the reasons to convince him: relief of painful menstruation and the argument from eugenics (a person with "abnormal inversion" should be sterilized). Gilbert finally agreed; the surgery was performed; and Alan Lucille Hart is listed as an alum in the 1951 Alumni Directory.

Gilbert later wrote up the case study and published it in the Journal of Nervous and Mental Disease (52:4; Oct.1920). He only referred to Hart as "H"; it was up to later researchers to uncover the patient's true identity. You can read the original article by paging the issue from Storage (click on the Request button in the catalog record and select v.52, 1920).

This story, and the rest of the early history of transsexualism in America, can be found in Joanne Meyerowitz's book How Sex Changed (available in the Main Library).

More information on Gilbert and Hart might be available in our collections here at HC&A, but no one has yet asked us to look...

The OHSU community lost one of its oldest members this past month: Dr. George Saslow, Emeritus Professor of Psychiatry, died on Sept. 16 at the age of 99. Saslow was the first full-time Chair of the Department of Psychiatry at the University of Oregon Medical School and served in that capacity from his arrival in 1957 until his (mandatory) retirement in 1973 at the age of 65. He remained a contributing member of the department up through 2003.

One of Saslow's most notable assignments was as the psychiatric consultant to the Manhattan Project. Although that duty was not something he could discuss in great detail, he does talk in depth about his experience treating victims of the famous 1942 Cocoanut Grove fire in his oral history interview.

A short biography of Saslow and his contributions to the school can still be found on the Department of Psychiatry website; the Oregonian obituary notice is also available online.
Posted by Sara Piasecki at 10:36 AM